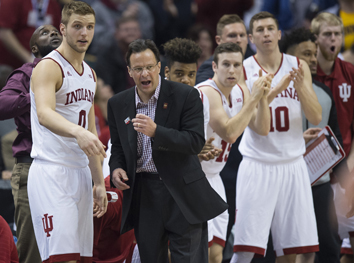 Let’s have a big round of applause for the Big Ten. OK, not you, NCAA selection committee.
Clearly, the bracket-makers weren’t all that enamored with the league this season. How else to explain Michigan State being proclaimed a No. 1 seed by every talking head on every channel, except by the folks who counted? They looked at the Spartans and saw No. 2.
How else to understand why Indiana and its outright season championship are on the No. 5 line, assigned a path fraught with peril, which we’ll get to in a minute? On the same line, Purdue and Maryland. The league might as well change its name to the Big Fifth Seed Conference.
(Pause for quick question. Do you know which seeding, historically, is famed for being upset fodder in the first round? Right. No. 5. It’s more dangerous than cliff jumping. You've been warned).
Consider the road for the Indiana Hoosiers. Did we say “road?’’ That should be “gauntlet.’’ You could make the case that no champion from any of the big boy conferences got a tougher trail.
This is what a lot of people saw when they got their first look at the bracket.
Indiana vs. Kentucky.
How nice. And just when it was starting to seem as if we’d see North and South Korea at a pitch-in dinner before we’d see these two on the same basketball court. Maybe the NCAA could do what the athletic directors could not, get them together, even if it is in the middle of Iowa.
One small trifle, though. First, Indiana has to beat Chattanooga, which is hard to spell and harder to play against. Chattanooga has won 16 of 18, and is 14-1 in games settled by single digits—including wins over Dayton, Georgia and Illinois.
Let’s say that works out. Then it’ll be time for Kentucky, assuming the Wildcats don’t stumble over Stony Brook. The Hoosiers haven’t beaten the Wildcats in the NCAA Tournament since 1973, losing the three meetings since, including the 1975 regional championship kick in the teeth.
But let’s say that works out, too. Then it’ll likely be North Carolina, who won the ACC season and tournament championship. The Tar Heels haven’t allowed an opponent to hit 45 percent in 23 consecutive games. See where this is going? If Indiana wants to make a deep run, it’ll have to be through bluebloods.
As for Purdue, you’d think it would be good news for any team which features two seven-footers that the next opponent has the word “Little,’’ in its name. But at 29-4, Little Rock owns the nation’s best record outside of Kansas, and has been fast-tracked in its rebuilding under new coach Chris Beard. This time last season, the Trojans were 13-18.
Survive that, and Purdue will probably get Iowa State, one of the Big 12 brutes. Conceivably, the Boilermakers could meet Butler in the Sweet 16, and Michigan State again in the Elite Eight. But a lot of tubas have to be played between now and then.
Butler faces some history in the first round against Texas Tech, with Tubby Smith becoming only the second coach ever to lead five different schools into the tournament. Should the Bulldogs get past that, likely waiting will be No. 1 seed Virginia.
Notre Dame plays a First Four winner, either Michigan or Tulsa. Perhaps Tom Crean can tell Mike Brey about this Kameron Chatman guy off the bench for the Wolverines. The sub who shot down the Hoosiers the other day. Survive that, and the Irish will likely have to deal with West Virginia’s pressure defense.
So nobody from the state got a stroll in the park. Nobody from the Big Ten, either. Other controversies from Selection Sunday burned hotter. The inclusion of Syracuse and Tulsa was questioned coast to coast. Monmouth’s absence almost brought candlelight vigils.

But the Big Ten placings were, at the very least, curious. True, seven teams were invited, including the bubble bunch from Michigan. Besides, the vice chair of the committee is Mark Hollis who is—ta da—the athletic director at Michigan State.

But the Big Ten will have to do it the hard way. The league has not produced a national title in 16 years, though in that time, it has sent six different schools to the championship game. To get to the Final Four, Indiana might have to claw through a dangerous upstart—Chattanooga—the aristocracy of Kentucky and North Carolina, and a rising-ever-higher power in Xavier. Purdue might have to beat a No. 1 seed in Virginia, and a should-have-been No. 1 seed in Michigan State.

Quite the ordeal. Or should we call it opportunity?