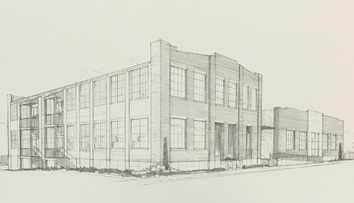 A proposed $4.6 million redevelopment of a historic building in Franklin is the latest in a string of projects that could help transform the Johnson County city’s downtown.

The Franklin Redevelopment Commission is partnering with the Franklin-based Bemis Group and Kwang Casey, owner of Oaken Barrel Brewing Co. in Greenwood, to revitalize the former Varynit Garment Factory on East Wayne Street.

The two-story, 60,000-square-foot brick building was constructed in the mid-1920s and bustled during World War II with seamstresses preparing clothing for soldiers. It later housed Kay-Jee Sporting Goods and gained attention for producing the basketball uniforms used in the 1986 movie "Hoosiers."

Dubbed the Residences at the Garment Factory, the redevelopment would include up to 10 condominiums and retail space, in addition to an event center operated by Casey. The center could begin accepting reservations late this year.

Franklin’s redevelopment commission is slated to approve the project on Tuesday, with work set to begin immediately.

“It is going to be a very fast-paced project,” Franklin spokeswoman Angie Longtin said.

The city is contributing nearly $1.3 million toward renovation of the garment factory building and to acquire other properties in the area.

One of the buildings Franklin is buying is the former Double-Cola bottling plant on South Water Street across from the garment factory. The plant produced the soda for Chattanooga-based Double-Cola Co. until 1974, when the company canceled the plant’s contract.

City officials are unsure of the building’s future but think it could be converted into office or co-working space, Longtin said.

“They decided it was a key building, as far as redevelopment of that area is concerned,” she said.

The city also is buying four houses to the west of the garment factory building, all of which the owners have agreed to sell, and plans to demolish them to provide public parking for the redevelopment.

In a prepared statement, Franklin Mayor Joe McGuinness said the garment factory has been on the city’s radar for at least a few years.

“This will have a profound impact on the community and will solidify our strong efforts to revitalize our downtown,” he said.

Also in the works is an effort by B2S Labs to renovate a vacant building at 97 E. Monroe St., about a block north of the garment factory building and east of the Johnson County Courthouse. The company hopes to move into the property in a few months.

B2S Labs originated from B25 Consulting, a biotech firm founded in 2003 by former El Lilly and Co. scientist Ron Bowsher. He received a property tax abatement from the city in May to retrofit the historic building near Franklin College. The lab will provide clients with custom reagents, which are used in the discovery and production of biotherapeutic drugs.

In addition, Franklin businessman and home-brewing hobbyist Phil Warrenburg is leading a group that bought the “Old City Hall” building at 55 W. Madison St. a block north of the courthouse, with plans to convert it into a microbrewery and restaurant.

Designed by architect Louis A. Simon in the Georgian Revival style, it served as a post office until 1981 and as City Hall until 2010.

Owners hope the Old Post Brewpub will begin serving its beer this year.