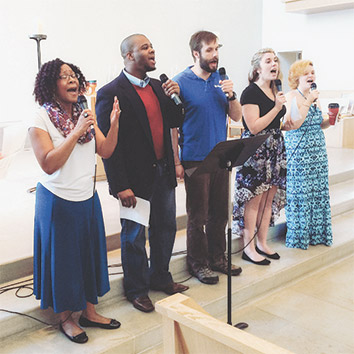 Training church leaders isn’t what it used to be.

Indianapolis’ Christian Theological Seminary—which has been in that business since 1855 when it was North Western Christian University—is evolving.

It desires to be nimbler and entrepreneurial, evidenced by new degree programs, flexible schedules, a focus on affordability, and a new co-working space. And the school’s bread-and-butter degree—a Master of Divinity—has been transformed to be more practical for modern church leaders.

That’s because Americans’ religious habits and preferences have changed drastically since CTS became a free-standing seminary in 1958. 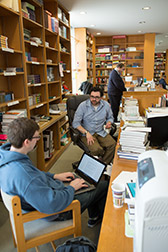 CTS is raising money to pay for upgrades to the seminary’s grounds and buildings, most of which were built in the 1960s. (Photo courtesy of Christian Theological Seminary)

Matt Boulton, who came five years ago to lead the institution as its president, said CTS is “living through a great innovation.”

“Every seminary in the country is working with a model from another era,” Boulton said. “What would it look like to have a 21st century world-class seminary? CTS is really well-positioned to become that.”

Not everything is working in the seminary’s favor.

Enrollment is down, a shift that’s not surprising given a nationwide drop in church attendance. Fall enrollment was just 152 students in 2015, compared with 210 in 2011—a 27 percent drop.

CTS has also had about 110 inquiries into a new doctoral program in African-American Preaching and Sacred Rhetoric since it was announced in April.

“I like our chances, but we can’t take our eye off the ball with respect to enrollment,” Boulton said. “That’s a major and important challenge for us.”

The seminary is affiliated with the Disciples of Christ, but more than 30 denominations and religious traditions are represented among students, faculty, staff and administration. Besides the Master of Divinity, CTS offers master’s degrees in clinical mental health counseling, marriage and family therapy, and theological studies. It also offers a doctorate degree in ministry, along with several non-degree programs.

The institution is in relatively good financial health—at least compared to other higher education institutions. CTS doesn’t have debt and has an endowment of $93 million, according to Boulton.

It also last fall completed its first capital campaign in more than 20 years—raising $4 million, which will pay for upgrades to the seminary’s grounds and buildings. Most were constructed in the 1960s.

“We have the opportunity to innovate as long as we don’t become complacent,” Boulton said. “We need to think about the business model that’s going to carry us forward for the next 50 years.”

Enrollment for theological schools declined 5 percent from 2009 to 2014, according to the Association of Theological Schools’ survey of its nearly 275 member institutions in the United States and Canada, including CTS. A 2015 report from the association said a significant number of member schools that were growing had recently “implemented new degree programs, new delivery systems or both.”

The accrediting body cheered recently when it found overall enrollment in its schools increased in 2015 for the first time in more than a decade—by less than 1 percent.

“We don’t know if that’s a trend or not, but we’re hopeful,” said Tom Tanner, ATS’ director of accreditation and institutional evaluation. “Change is obviously in the air and it’s inevitable. Schools that don’t will probably be left behind.”

The share of U.S. adults who said they were religiously affiliated dropped from 83 percent in 2014 to 77 percent in 2007, and fewer adults in 2014 said they believed in God than did seven years earlier, according to the Pew Research Center.

Also, the percentage of U.S. women who attend religious services at least once a week was about 28 percent in 2012 compared with 36 percent in 1972. Weekly church attendance among U.S. men has dropped four points, to 22 percent.

“People don’t just come to church anymore because they feel like they have an obligation,” said Verity Jones, executive vice president at CTS. “Joining isn’t a thing we do anymore. Theological education has to think differently about how to prepare leaders to understand the different ways in which people participate and communicate.

“People are looking for a place to have a positive impact in the world, a place to be inspired and to understand the deep meaning of their life. In past generations, it was easier to take for granted that they would come.”

That also means seminaries have had to look for students in new places.

“Congregations are sending fewer people because there are fewer people there,” said Bill Kincaid, a CTS professor and its interim vice president of academic affairs. “There are probably fewer full-time pastoral positions.

“But also, it’s a time that is calling for pastors to retain some very traditional skills but to also be equipped for new ones—a time for a discerning nimbleness as information passes at a very rapid rate.”

Jones said CTS’ “crackerjack recruiting team” has had recent success in reaching a different kind of student. One current CTS student is an Indiana University medical student who wants a theological and ethical framework for his work. There’s also a professional photographer who wants a broader global perspective.

Here’s how the seminary looks different than it used to.

“We want our graduates to model a life-giving faith,” Kincaid said.

CTS also is attracting more professional and out-of-state students with flexible schedules and more nighttime classes to provide “multiple doors to the education we’re providing,” Boulton said. It is also inviting community leaders to some of its courses as it tries to be more “outward facing” and less insulated from the broader Indianapolis community.

For instance, Boulton will himself teach “Changing the World 101” this fall, which will focus on ending hunger in Indianapolis by 2030. He hopes community leaders attend the course and believes their involvement will enhance the experience for master’s of divinity students. 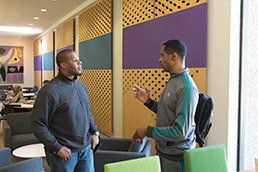 About one quarter of the students at CTS in Indianapolis are black and about 40 percent are men. The school has added a doctorate in African-American preaching. (IBJ photo/Eric Learned)

Two new programs generating a spike in interest—the African-American preaching program and a collaboration with the national “Open” network of progressive evangelicals—are also poised to diversify the type of student who comes to CTS.

CTS decided to develop the African-American preaching program—which they say is the first of its kind and will officially launch in early 2017—by focusing on strengths it had already: devoted faculty members who are experts in the field. CTS professor Frank Thomas is an “international authority” on African-American preaching, which Boulton called an “American treasure.”

The Open network partnership will allow students nowhere near Indianapolis to get a CTS degree. Students can attend week-long intensive courses and Saturday courses. The Open network is a “collective of post-evangelical, progressive evangelical, non-denominational and “free-church” leaders, which fits into CTS’ historic commitments to hospitality and inclusion.

A new co-working space—the Hub for Innovation Vision and Entrepreneurship, or HIVE—was formed to help incubate small not-for-profits that are civically minded—an example of CTS’ “trying to stay close to people who are doing interesting and imaginative things—people who have already caught the temperament that we want to cultivate in our students,” Kincaid said.

CTS will continue to be successful if it keeps changing along with the people it serves, he said.

“One of the challenges will be to continue to stay close enough to the community and the church so that we stay focused on preparing people for what comes next,” Kincaid said, “rather than what has been.”•