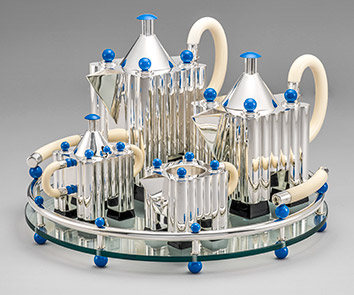 Much of the marketing and media attention for the Indianapolis Museum of Art this season has been focused on its artist-designed miniature golf attraction. That stands to reason, since a round of putting through the fun course on the terrace is a much easier sell than a traditional visual art exhibition.

Here’s hoping, though, that some of the putt-putters take the time before or after a round for a look inside the IMA at another new exhibit, “19 Stars of Indiana: A Bicentennial Celebration” (through Jan. 8). Recognizing the 200th anniversary of Indiana statehood, it focuses on Hoosiers who have made a mark on the visual arts in this, the 19th state.

While some museum shows might feel like graduate courses, appealing to those who want to go deep into a particular subject, this one is more of a survey course, skimming the surface of its 19 subjects and encouraging further exploration of those visitors might find interesting.

In it, you’ll find the usual suspects, including Robert Indiana, T.C. Steele (who has his own show at the Indiana Historical Society) and William Forsyth.

With them are some who are likely to be more familiar to the general public—Halston, Michael Graves, Bill Blass, the Overbeck Sisters—because of their consumer-focused efforts. 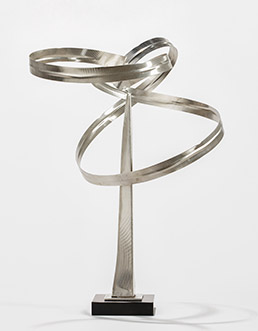 George Rickey, above, creator of carefully balanced kinetic sculptures, is among the 19 Hoosiers celebrated. (Photos courtesy of Indianapolis Museum of Art)

And there are those who, for many, might be encountered for the first time—including jewelry creator Janet Payne Bowles and printmaker Garo Antreasian. Clearly, an effort has been made in this collaboratively curated show to appease all IMA departments.

Given the amount of attention the IMA is giving to golf, you’d think course designer Pete Dye might be one of them, but he’s not.

Each of these “stars” is represented by samples of his or her work along with bio information. The IMA’s website is helpful in exploring the work of each in greater depth. I was predisposed to the art of kinetic sculptor George Rickey, thanks in part to the wonderful 2009 downtown exhibit, but was interested in seeing more about the planning work that went into his pieces. Similarly, pencil-on-paper work informs the area devoted to Overbeck pottery.

The Falrath Hines abstracts, though, stand on their own, with his 1960 untitled work seeming to predict the turbulent decade to come while his radiant, red “Lorraine” (1986) manages to be both geometrically solid and burning at the same time. And what was on display made me want to see more of the fascinating photographs by Frank M. Hohenberger—a curiosity that led me to Indiana University’s Lilly Library digitized collection of more than 9,000 of his shots. 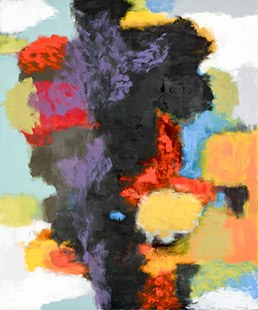 The abstract paintings of Falrath Hines, right, are among the show’s highlights. (Photos courtesy of Indianapolis Museum of Art)

Now I just need a few extra days to dig through them.

Less successful is the IMA’s effort to subdivide these stars. Placing such artists into categories is a bit tricky, but the IMA team has assigned them roles as Pioneers and Innovators, Entrepreneurs, Nature Lovers, Teachers and Trainers, and Visionaries and Dreamers.

Such loose classifications—with clear room for spillover into other categories—trivializes rather than enhances their creative efforts. The show also opens with a timeline with video that doesn’t seem as well-thought-out as it should be (why, for instance, play up Robert Indiana in the 1920-1959 period when he was far more influential in the 1960s?).

None of that matters much, though, for this survey course. And, rest assured, there won’t be a quiz.•