For more than two years, Eli Lilly and Co. has pushed the message that the worst days are over and a brighter future is just around the corner.

Now, finally, Wall Street is starting to believe. In recent weeks, analysts have issued glowing reports on the Indianapolis-based drugmaker’s late-stage pipeline, which they say is on the verge of delivering a wide array of promising drugs for ailments from arthritis to cancer.

JP Morgan, BMO Capital Markets, Goldman Sachs and Credit Suisse have upgraded Lilly to a “buy” rating in the past month. In response, Lilly stock, which spent much of the past decade in the $40s and $50s, has climbed to near a 10-year high, hitting the low $80s. Several analysts say they expect the stock to hit the high $90s within a year.

“We believe Lilly is entering a long-lasting period of accelerating revenue and earnings-per-share growth, driven by a diversified late-stage pipeline,” wrote Jami Rubin, drug analyst at Goldman Sachs & Co., in a Sept. 27 report. 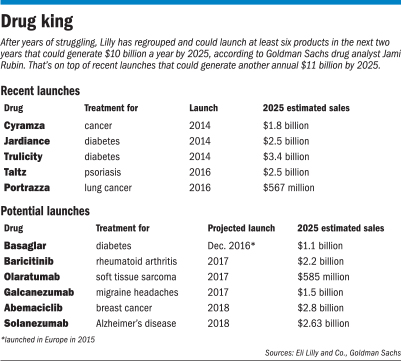 Wall Street’s buy-in represents a triumph of sorts for Lilly executives, who have been telling investors to keep the faith, even as revenue flattened after the company lost patent exclusivity on older drugs for depression, osteoporosis and schizophrenia. Lilly also faced doubters when it announced a string of high-profile failures in experimental drugs aimed at multiple sclerosis, lupus and Alzheimer’s disease.

However, the new vote of confidence from Wall Street also raises the pressure on Lilly to deliver. Now investors are expecting Lilly to execute its plan of moving drugs through the final months of clinical trials, then securing government approval and launching the products flawlessly.

Lilly declined to comment about the turn of events. But in May, John C. Lechleiter, chairman and CEO, told investors at a JPMorgan Healthcare Conference that the company had the potential to launch 20 products in the 10 years between 2014 and 2023.

“We believe we are in the midst of the most prolific period of new launches in our company’s 140-year history,” he said.

So far this year, Lilly has launched drugs for psoriasis and lung cancer and a new injection pen for delivering insulin shots. In 2014, it launched two drugs for diabetes and one for cancer. It will release third-quarter earnings on Oct. 25, allowing investors a glimpse at how those early products are faring.

Over the next three years, Lilly could launch up to six medicines for arthritis, cancer, migraine headaches and other maladies, several analysts say.

Those products could generate $10 billion a year in new revenue by 2025, Goldman Sachs’ Rubin told clients in her note. Lilly’s revenue last year was $19.9 billion.

“Our view is not based on any single product,” Rubin wrote. “In aggregate, we believe this product portfolio is among the more diversified and durable” in Big Pharma.

Wall Street’s reaction seems to be a ringing endorsement of Lechleiter’s longtime strategy of avoiding large-scale mergers, as many other drug companies have done over the past decade.

Instead, Lechleiter has placed his bets on Lilly’s own research, along with a few outside partnerships, to find enough big-selling innovations to keep the company independent.

“When John Lechleiter laid out this strategy to groups around Indiana in 2008, it was seen as a bold and gutsy thing,” said David Johnson, CEO of the life sciences initiative BioCrossroads, which aims to expand the state’s life sciences sector. “There were not a lot of other companies doing this. I think Lilly is now showing it was the correct strategy.”

Lechleiter will retire at the end of the year. He will be succeeded by Dave Ricks, now senior vice president, who has vowed to continue the go-it-alone strategy.

“I haven’t a shred of evidence that any of those big mergers have created value for shareholders or other constituents,” Ricks told IBJ in September. “They’ve probably destroyed value. And frankly, when I speak to our largest investors, they think the same thing.”

He called 2017 “a year of execution for us” to turn experimental drugs in the late-stage pipeline into valuable new products.

Analysts view some of those potential products as low-risk, such as two cancer drugs called olaratumab and portrazza. 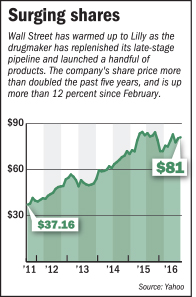 A bigger wild card is an experimental drug called solanezumab for treating dementia in patients with Alzheimer’s disease. Lilly is expected to release new data before the end of the year on a massive clinical trial that tested the drug on 2,100 patients.

More than 47 million people suffer from Alzheimer’s disease, and it is now the sixth-leading cause of death in the United States. There is no effective treatment; existing drugs only alleviate symptoms temporarily.

So solanezumab could generate billions of dollars a year, if successful. However, analysts say the chances are low, because two earlier trials of the same drug failed.

Lilly narrowed the focus of the latest trial to patients with mild forms of the disease. The drug acts by clearing a substance called amyloid beta from the brain before it clumps together in plaques that are a trademark of dementia.

Wall Street’s doubts about solanezumab grew in March, when the company said it was changing the goal of the trial to see primarily whether the drug will slow the cognitive decline of Alzheimer’s disease in patients. Another goal, measuring patients’ dailyfunctions, was downgraded to a secondary measure of the drug’s effectiveness. Lilly’s stock dropped nearly 4 percent on the news.

Nevertheless, several drug analysts now say they are bullish on Lilly’s pipeline, whether or not solanezumab is shown to work.

“We like Lilly without solanezumab, but like it more WITH solanezumab,” Gregg Gilbert, a drug analyst at Deutsche Bank Securities wrote in a note to clients Sept. 20.

He estimated that the Alzheimer’s treatment, if successful, could generate up to $2.25 billion in annual sales for Lilly by 2020.

Anderson of Sanford Bernstein set the drug’s odds of success at 25 percent to 50 percent, but if the clinical results are positive and the drug looks like it would get FDA approval, Lilly’s stock could double within two years.

“Solanezumab could ‘transform’ the company—if it works, of course,” he wrote.

With so many analysts getting excited and urging clients to buy, some local financial planners say they are seeing even small clients flocking to Lilly.

“Lilly stock performed poorly for years, and I think people got fed up with it and dumped it,” said Christopher Baker, a certified financial planner and co-owner of Oaktree Financial Advisors in Carmel, whose clients include hundreds of Lilly workers and retirees.

“Now, people are saying, ‘I’m going to hold onto it for a while and see what happens,”Baker said. “We’ve definitely seen a shift.”