Home » LOPRESTI: An NBA season preview in 140 characters or less

Weary from election fatigue? Or maybe Colts fatigue? For diversion, the Pacers open their season Oct. 26, and we can all agree on one assumption:

They’re better this year, with more weapons and willingness to get up and down the floor, and thus poised to make a deeper playoff run.

Unless, of course, they aren’t.

Check back on, oh, say, the Sunday after Thanksgiving. They’ll be 18 games into the season then, with 12 at home. Ample opportunity to impress early. Or not. But until then, it’s #Nobodyknows.

Twitter turned 10 this year, by the way, meaning it hasn’t even been around the NBA as long as LeBron James.To mark the occasion, and get the season started, let’s go around the league for a status report, with no more than 140 characters per team. In order of their appearance this season at Bankers Life Fieldhouse.

Dallas … Dirk Nowitzki still shines at 38 and the owner still loathes Trump. Mavs have not won a playoff series since ’11 title. #CubanforClinton.

Chicago … Dwyane Wade has come home. But is there second wind for a Windy City that badly needs it? #StillmissingyouMichaelJordan.

Philadelphia … Was nickname changed to 72ers after losing that many? Some signs of life, but then Ben Simmons broke his foot. #Can’tlosemorecanwe.

Orlando … Frank Vogel, we hardly knew ye. Plans are for him to revive the Magic with defense. #Thissoundsfamiliar.

Cleveland … Defending champion Cleveland. Sounds odd, huh? But one thing isn’t odd at all: the guy running the show. #TheEastisLeBronland.

Phoenix … The rebuilding and 59-loss Suns will play once in Indianapolis, and twice in Mexico City. #Mightbebadintwolanguages. 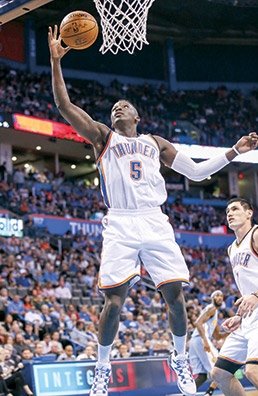 The Oklahoma City Thunder is counting on guard Victor Oladipo to compensate for the loss of Kevin Durant, who signed with the Golden State Warriors over the summer. (AP photo)

Atlanta … Hawks’ nine-year playoff run is longest in the East—by six years. And it should continue. #IfDwightHowardfitsin.

Brooklyn … Linsanity back in town with Jeremy Lin. Billionaire Russian owner is still searching for end of tunnel. #Worstteamrublescanbuy.

Portland … Bloomington North’s own Terry Stotts, the only zoology major among NBA coaches, has the Blazers surging. #Defineaherbivore.

New Orleans … The Pelicans need much better from Anthony Davis, and a re-enactment of his Oklahoma Sooner fireworks from rookie Buddy Hield. #Lotstofix.

Houston … It’s all on James Harden now, with no Dwight Howard to blame, as Rockets try to recover from last season’s belly-flop. #Atonement.

Detroit … Come watch Andre Drummond and see that, yes, you can be an NBA starter and shoot 35 percent at the free throw line. #Tryablindfold.

San Antonio … Last time Spurs began a season without Tim Duncan, Clinton was running for president. No, the other Clinton. #Timeflies.

Miami … The glory days of the Big Three seem a long time ago, in a galaxy far, far away. Now it’s up to Goren Dragic. #Onceuponatime.

Utah … Jazz fans, meet George Hill. He’ll be in the same lineup with Gordon Hayward. They can exchange IUPUI and Butler stories. #IndyWest.

Denver … The hot Nugget is Nikola Jokic, last seen putting 25 points on the USA in Rio and nearly authoring a Serbian upset. #CoachKforgivesyou.

Minnesota … The theory is Andrew Wiggins will one day help end a losing-season streak that goes back to 2005. #Longcoldwinter.

Toronto … Pacers don’t get a home shot at the team that eliminated them last spring until April 4. #BlameCanada.

Indiana … The Pacers have a star who can produce points with the ball in his hands. But what if the defense is lousy? #JustliketheColts.•