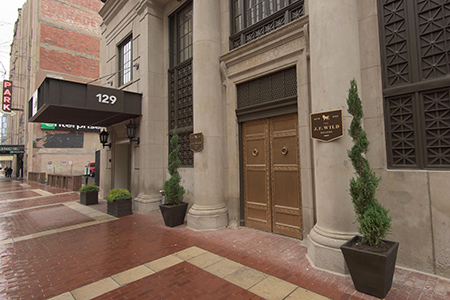 The distinguished J.F. Wild & Company State Bank Building on East Market Street downtown cost $1.25 million to build during the Roaring ’20s, when the owner spared no expense to equip it with the era’s grandest features.

Banker J.F. Wild had the limestone building constructed in 1923 to house his growing financial institution and commissioned Fermor Spencer Cannon, later the architect of Butler University’s Hinkle Fieldhouse, to design it in the Italian Renaissance Revival style.

Just four years later, though, the bank closed following the theft of $275,000 in bonds. Wild and three bank officers were indicted in the heist, though the charges were dropped in 1929.

Other banks later occupied the building, but decades of neglect took their toll—a decline that local developer Loftus Robinson halted with a nearly complete, two-year restoration that cost $7 million. 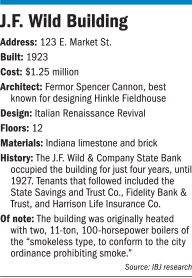 “We left the exterior of the building unchanged and, in fact, did some things to take it back to its original condition,” said Drew Loftus, a partner of the firm.

The 12-story building in recent years was easy to overlook, sitting empty and rundown. But its opening nearly a century ago enthralled the city, garnering nearly a page of coverage in The Indianapolis Star, in part because it was equipped with a state-of-the-art telephone paging system and smokeless boilers.

Loftus Robinson (Kyle Robinson is the other partner) moved its office in March from Broad Ripple to the top floor and has signed Kinetrex Energy, a division of Citizens Energy Group that supplies liquefied natural gas, to occupy the ground level.

The developer is set to host an open house Nov. 17 to help market the rest of the building to potential tenants. John Robinson and Jack Hogan of the local JLL office are the listing agents.

With a modern and bright interior from Indianapolis-based DKGR Architects, the space might appeal to more “creative users,” Loftus said. But the building has drawn interest from at least one law firm.

Loftus Robinson bought the building in 2014 from Crown Property Group. Crown, which owns the Stock Yards Bank & Trust Building across the street at 136 E. Market St., acquired the J.F. Wild from Flaherty & Collins Properties in 2008 with intentions of renovating it.

By the time Loftus Robinson bought it, the building had been vacant at least a few years. Judging from the roster of tenants that last hung in the lobby, several small criminal defense firms were the final occupants of the J.F. Wild, which sits less than a block from the City-County Building. 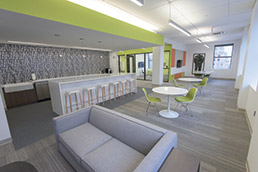 It sports dual addresses of 123 E. Market St. for the lobby entrance and 129 E. Market St. for the former bank space, where Kinetrex will be located. The bank entrance is easily recognizable by its double-leaf paneled bronze doors, which, thanks to a thorough refinishing from Loftus Robinson, now hearken back to the building’s heyday.

Inside, Loftus Robinson ripped out a second floor that was installed years ago. It had wiped out the original design that allocated the equivalent of two stories to the first-floor tellers’ cages. The developer also is restoring the terra cotta that adorned the support pillars as it readies the space for Kinetrex.

The company hopes to move from its temporary space near Massachusetts Avenue in Lockerbie Marketplace by the first of the year, Kinetrex CEO Aaron Johnson said.

Launched in 2013, Kinetrex has grown to about 30 employees—none of which has seen the space yet.

“We know it’s going to knock their socks off,” Johnson said. “We wanted something with an impressive look, and this certainly has that.”

The basement’s huge walk-in vault that primarily stored safety deposit boxes has been polished and will serve as a conference room. Also, the original marble in the basement bathroom has been restored along with the mail chute that extends to the top floor.

“Everything we found that was original, we restored and saved,” Loftus said. “But unfortunately, a lot of the historic character inside was gone.”

The original walls and ceilings had been covered, carpeting added, and the floor spaces chopped up to house more tenants. Tearing out the faux ceilings enabled Loftus Robinson to gain an extra three feet by replacing the ductwork with a more modern heating and cooling system that uses refrigerant and drain lines running from fan coil boxes. The LG Variant Refrigerant Flow system can operate in heating or cooling mode at the same time.

The sixth floor, where the entrance to the rear parking garage attaches, has mostly been converted to common conference space with room for a small tenant. The floor also features a kitchen and two showers.

Outside, Loftus Robinson cleaned the building’s limestone, tuck-pointed the exterior, and stripped and patched the metal detail work around the windows. The lions’ heads under the windows on the Market Street facade were restored, and lights were added to illuminate the building at night.

Also, the canopy at the lobby entrance was rebuilt to make it historically accurate.

Loftus Robinson accomplished the renovation with the help of historic tax credits. The developer, however, didn’t even need to appear before the Indianapolis Historic Preservation Commission and simply received approval from IHPC staff because it didn’t really make any alterations to the exterior, said David Baker, IHPC’s administrator.

“They just restored what’s there,” he said. “I’m anxious to see whatthey’ve done.” 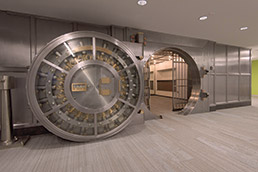 Loftus Robinson’s projects include the Switch: a $28 million mixed-use development built on the site of the old Fishers Train Station, and the $50 million Wilshaw adjacent to Indianapolis Motor Speedway.

The developer and Scannell Properties plan to start construction on the Wilshaw in the spring. Plans call for 150apartments, 10 condominiums, a 120-room hotel, 15,000 square feet of retail, and a 500-space parking garage.

But Loftus Robinson hasn’t ruled out another historic renovation like it’s done at the J.F. Wild.

“Having been through this now,” Loftus said, “we definitely want to find more buildings like this downtown that need some work.”•