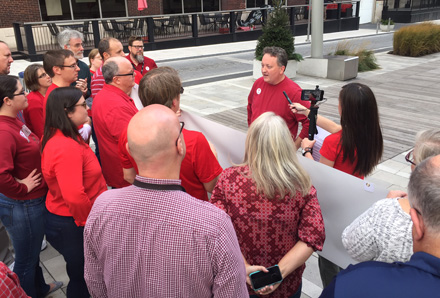 About two-dozen employees at The Indianapolis Star conducted a brief walkout Friday afternoon in downtown Indianapolis to express their displeasure at recent management decisions and demands by owner Gannett Co.

The Indianapolis NewsGuild, which represents newsroom and custodial employees at The Star, said Gannett management is threatening to eliminate five journalists if the guild does not go along with the company’s decision to outsource The Star’s copy editors.

Late last month, Gannett said it planned to eliminate The Star’s entire copy editing staff and move those duties to a central copy desk in Louisville. The move would eliminate seven jobs in Indianapolis, although two of the staff members would be moved to other positions.

Two members of The Star's reporting staff were also laid off as part of a larger effort by Gannett to trim 2 percent of its workforce. The layoffs were the seventh round of job reductions at the newspaper in the past eight years.

The guild thinks the copy editor strategy is a “bad idea” because of its potential impact on the quality of the local newspaper, but said management is playing hardball in negotiations about the issue.

“Gannett has told the Guild that if we don’t agree to their demand by Nov. 30, it will lay off five more Star journalists—and still move ahead with plans to outsource the copy editors,” the guild said in a posting on its website. “That’s how it’s gone so far with Gannett during these contract talks—demands, deadlines and threats. Not negotiations. So we’re pushing back.”

The walkout lasted about 15 minutes. The employees gathered on Georgia Street, across Meridian Street from the newpaper's entrance, and listened to Guild President Robert King give a short talk about contract negotiations.

King said the Gannett is unwilling to give the five copy editors who are losing their jobs two weeks of severance for each year of service, up to a maximum of 52 weeks, which is what the guild is seeking.

“Yet, in the reality of the Gannett executive, it’s acceptable to give the CEO a golden parachute of $23 million,” the guild said on its website.

Gannett is offering the copy editors one week of pay per year of service and six months of COBRA coverage, the guild said.

King said the guild is also upset at the wages being paid to custodial workers at the Indianapolis printing plant, who took a 10 percent pay cut in 2009 and haven’t had a raise in more than four years.

King said some of the workers have been with the company for 15 years but make only $10.85 an hour. He said one worker told him she makes ends meet with trips to the food pantry.

The guild is seeking a 3 percent raise for remaining employees for the next three years, plus a minimum wage of at least $15 per hour for the custodial staff. Management has rejected most of that proposal, the guild said.

Jeff Taylor, a Gannett vice president and its Midwest regional editor, did not immediately respond to a phone message from IBJ seeking comment.