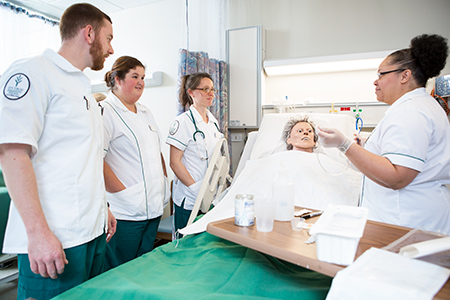 Gov. Eric Holcomb wants to tackle one of Indiana’s most pressing economic challenges: building a qualified workforce to fill open jobs throughout the state.

Holcomb’s idea—part of his legislative agenda—is to create a $2-million-per-year grant program that pays tuition or fees for adults who earn credentials, certificates and degrees in specific high-demand, high-wage fields designated by the state.

The plan to skill up Indiana’s adult workforce could help prepare the state to fill an estimated 1 million jobs by 2025, most of which will be openings created by the impending retirements of baby boomers, according to Indiana Department of Workforce Development research. About 300,000 people will be needed to fill entirely new jobs, DWD says.

The program could also combat what researchers have described as a gap between the number of “middle-skill” jobs—requiring more than a high school diploma but less than a four-year degree—and the number of qualified workers to fill those jobs. 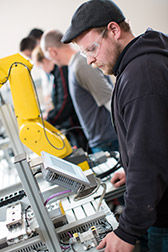 There are about 400,000 jobs considered “high wage, high demand” to fill by 2024. And at that time, about 30 percent of all the state’s jobs will require workers to have a post-secondary certificate, some college, or an associate’s degree, according to DWD.

“We need to focus on filling that gap,” said DWD Commissioner Steve Braun. “One of the governor’s big initiatives is to make certain that, if there are individuals that are out of the workforce or [already] in the workforce that want to go back for that education upgrade, that we can find a way to fund that. I think we have a chance of making real progress.”

The program, which Holcomb has asked the Indiana General Assembly to fund at $2 million per year, would be shaped by DWD’s occupational demand data, Braun said.

Tuition grants would be targeted to specific fields in regions of the state, depending on the positions most in demand in those areas. Braun said businesses would help the program identify needs.

“It will be a regional effort,” he said. “That’s the only way this works. We can now project where those [future] occupations are going to be down to a county level.”

Ivy Tech Community College and Vincennes University would likely provide some of the training.

Ivy Tech President Sue Ellspermann said she is ready to get involved in the effort.

“I support anything that the governor’s looking to do to encourage the adult worker to come back and skill up and meet the needs that are out there,” Ellspermann said. “It really is an opportunity to help identify those high-wage jobs out there and help attract working adults to move Indiana’s economy forward.”

Claudia Cummings, vice president of workforce and education for Conexus Indiana, said the grant program has the opportunity to aid workers who are currently struggling—or who have given up and left the workforce altogether.

In the fields of advanced manufacturing and logistics alone, Conexus Indiana says, the state has more than 11,000 middle-skill jobs to fill each year.

“You think about the individuals out there working multiple part-time jobs,” Cummings said. “They could have a really great living if they were to get properly trained.”

State investment could also be an important tool for employers, she said, because the “cost of hiring an unskilled worker is high.”

Besides teaching soft skills, Cummings said, some manufacturers “are dealing with hundred-thousand-dollar blanks of titanium” that unskilled workers couldn’t be trusted with.

“They have to know what they’re doing,” Cummings said. “The most profitable companies rely on the ingenuity of their employees and they need employees who are properly trained in order to make sure they are successful.”

But even if the state pays tuition, experts said, trying to improve the adult workforce still involves challenges.

“The reality is, there are a lot of life demands,” Klitzsch said. “We run into individuals who want to get a better job, want to move into those high-demand, big-wage careers, but they have to support a family oftentimes and it relegates them to that minimum-wage or low-skill, low-wage job.”

Klitzsch said she hopes the grant program will serve adults who can afford to develop new skills only on a part-time basis, so that they don’t encounter the opportunity costs that typically come with leaving the workforce to pursue a college degree or credential.

“It’s really difficult to completely drop out of the workforce to pursue post-secondary education,” she said. “Any creation of a grants program would do well to have ways to support an individual.”•