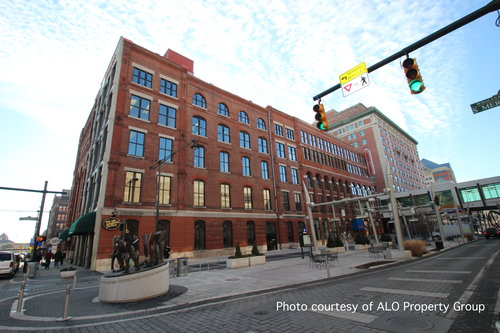 The building—which has housed the Old Spaghetti Factory since 1982—had been listed for $10.2 million. Other tenants include Hooters, Publicis and Planned Parenthood.

Realty Resource Capital Corp. closed on the five-story, nearly 90,000-square-foot property last week. It had been owned by Station Place LLC, an Indiana-based company formed by a group out of Louisville, for 15 years.

“The building benefits from a high-demand location, brick interiors and high ceilings— features in demand in today’s market, resulting in high occupancies over the past 10 years,” said Rick Klepal, senior managing director for investment sales and capital markets at ALO Property Group, which conducted the sale.

Station Place is actually a combination of three adjoining buildings that were built between Meridian and McCrea streets between 1888 and 1890. They were joined in a 1981 renovation.

He said the building is “in excellent condition with modern day replacements.” It’s part of the city’s downtown skywalk system, which connects it to the Omni Hotel, Circle Centre mall, Indiana Convention Center and other key hotels and buildings.

In addition, a $22 million Cambria Hotel & Suites is planned for the parking lot next door to Station Place on Meridian Street.

Realty Resource Capital Corp. said it already has significant holdings in the Indianapolis area. Among them is Southport Plaza shopping center, which it acquired from Nationwide Mutual Insurance Co. in 2014 for $11.4 million.