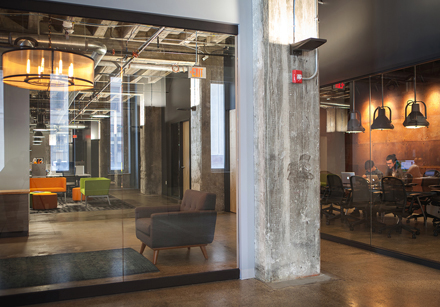 One of the city’s largest advertising agencies now can draw creative energy from the monumental views the firm enjoys from its new digs in the heart of downtown.

Bradley and Montgomery is settling into the second floor of the Indianapolis Power & Light Co.’s downtown headquarters at 1 Monument Circle after moving there at the end of November.

The move follows a $20 million renovation of IPL’s nine-story building, in Monument Circle's southeast quadrant, in an effort to modernize the structure for employees and to attract outside tenants.

By reconfiguring office space and moving a call center out of the building, IPL freed up enough space to lease out two floors. Evansville-based Old National Bank occupies part of the first floor with a command center and branch that moved from Ohio and Illinois streets.

An IPL spokeswoman said the electric company, owned by energy giant AES Corp. of Arlington, Virginia, has no plans to sublease any more space.

Bradley and Montgomery co-founder Mark Bradley first toured the nearly vacant second floor in January 2016 and felt as though he had stepped back in time.

Bradley had searched for five months for new space and had considered Market Tower, which is becoming popular with tech firms and other creative companies due to owner Zeller Reality’s zeal to build out floors to meet their demands.

But Bradley chose the IPL building, “because you can’t get much closer to the heart of the city than right here.” He said he has no idea how much the firm spent on the buildout; the cost is included in the rent.

Bradley co-founded the agency in 1999 with Scott Montgomery after both left Young & Laramore to hang their own shingle. Montgomery now leads their Culver City, California, office. With $59 million in local billings in 2015, Bradley and Montgomery has grown into the Indianapolis-area’s third-largest advertising agency, according to the most recent IBJ statistics.

The firm has 50 employees and counts as clients Chase, Skype, Bing and Microsoft Office. Many are in the tech or finance sectors and based outside of Indianapolis.

In 2004, the owners bought a two-story building at 342 E. St. Joseph St. near where the Indianapolis Fire Department’s headquarters is now located. Bradley and Montgomery occupied that and the finished basement but outgrew the space. In 2012, they leased both floors of a building within a block of its headquarters, occupying a total of 14,000 square feet between the two buildings, but the separate locations became too unwieldy to operate.

“It just got to the point where it was just too spread out,” Bradley said.

The firm occupies 17,200 square feet on just one floor at the IPL building, which actually is two conjoined buildings. The older one dates to 1927. IPL moved there in 1935 and expanded into the newer building in 1959.

Bradley & Montgomery’s space on the second floor hardly resembles its past, thanks to the work of Indianapolis-based Schott Design Inc. Bradley said he had a vision for the space, and Schott “brought it to life.”

The 14-foot-high ceilings helped to provide an industrial feel by exposing the duct work. The old terrazzo floors stayed, as did the concrete walls, to showcase the natural materials.

The more interesting discoveries included whiskey bottles stuffed into the caverns of a wall that had been built in the late 1950s as part of the newer IPL building. Bradley & Montgomery stripped the drywall to create a doorway between the two buildings and open up the floor.  The empty bottles remain where they were found, to add character to the space.

But there are signs of technology, too, evident from the LED cloud lighting in the “whiteboard space” and the large production screen in the auditorium to enable the local office to connect with the Culver City location.

The firm hosts “happy hour” in bar space next to the employee lounge overlooking Monument Circle—or what Bradley likes to call the “money space.”