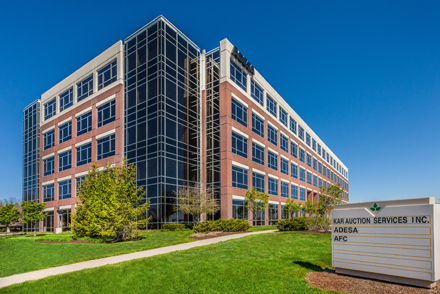 Hamilton Crossing, a high-profile Class A suburban office park consisting of six buildings on 44 acres along U.S. 31 in Carmel, has new ownership.

The sale was announced Monday by CBRE Group Inc., which helped broker the acquisition. The deal closed Jan. 25.

Financial terms were not disclosed, but a real estate source estimated the approximate price of the 591,387-square-foot package of buildings at $70 million.

An affiliate of New York City-based real estate investment firm Group RMC Corp. acquired five of the buildings from Indianapolis-based Duke Realty Corp., which has been selling off its office properties to concentrate on the industrial market.

A Group RMC affiliate acquired the sixth building from the bankruptcy estate of ITT Educational Services.

“Hamilton Crossing is consistently one of the best-occupied office parks in Indianapolis,” Richardson said in a written statement. “It’s one of the best-located developments in the prestigious Meridian Corporate Corridor, and its tenant roster is filled with multiple blue chip corporations and prestigious professional firms.”

According to CBRE, Group RMC has become the largest owner of suburban office property in Indianapolis since entering the market just over four years ago. The company owns more than 1.87 million square feet of space in Parkstone, Park Fletcher, Castleton Park and Hamilton Crossing.

About half of that space is in Castleton Park, a 31-building property Group RMC acquired in July 2015.

“We are very fortunate to own such high-quality assets, and we look forward to continuing to grow our portfolio in the Midwest,” Group RMC said in a written statement.