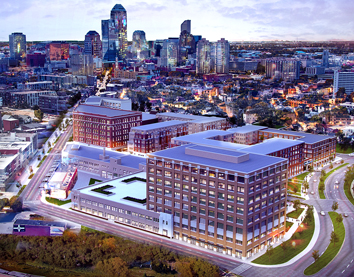 Contamination on the former Coca-Cola bottling plant site along College and Massachusetts avenues is more widespread than the developer of the property initially expected and has seeped into the adjacent Chatham Arch neighborhood.

Wisconsin-based Hendricks Commercial Properties LLC is preparing a $260 million redevelopment of the 11-acre parcel, which it is buying from Indianapolis Public Schools. Development plans call for a hotel, cinema and retail, residential and office space.

The developer anticipated that the site would need environmental remediation following decades of manufacturing operations and, in its bid to purchase the property, requested $2.4 million from the state to cover cleanup costs.

But now Hendricks says it will need more money to tackle the plume of contamination that has made its way into the surrounding groundwater. Hendricks executives met with Chatham Arch residents Wednesday evening to inform them of their findings.

“We need to see if it’s in any of the homes,” said Isaac Bamgbose, Hendricks’ asset manager. “We’ll be conducting further studies this month and next month to understand the full extent and the perimeter.”

Hendricks plans to establish a barrier system along College Avenue between the site and the neighborhood to cleanse the chemicals from the groundwater and alleviate any potential vapor intrusion into homes.

The developer doesn’t know the exact source of the contamination yet but suspects it stems from some type of chlorinated solvent.

Remediating the area could take up to nine months, Bamgbose said, but he and company CEO Rob Gerbitz insisted Hendricks is “100 percent” committed to the redevelopment of the site.

“We’re here to fix it,” Gerbitz said. “This is something we do. It’s just a process you have to go through.”

Hendricks likely will seek state and federal assistance, which would be channeled through the city, to cover the additional cost.

“If there is mitigation or remediation that is necessary, and there are funds to access that they can’t, it’s our commitment to do that,” said Jeff Bennett, the city’s deputy mayor of community development. “We want to make sure the neighborhood gets taken care of as part of the project.”

Hendricks officials say they're confident the remediation won’t interfere with the project’s timeline. The developer hopes to present its design next month to the Indianapolis Historic Preservation Commission for first review.

Plans call for 400 residential units, 200,000 square feet of retail space, 200,000 square feet of office space, a cinema and a 120-room West Elm hotel. Hendricks is paying IPS $12 million for the land and must close the sale by the end of July. If not, the city would be required to buy the lot from IPS for as much as $13 million.

The IPS board in May approved a recommendation to sell the property to Hendricks, despite concerns from neighborhood residents who argued the scale of the development is too large.

Hendricks’ proposal beat out five other bids—two from Milhaus Inc. and one each from Browning Investments LLC, Strategic Capital Partners LLC and Hageman Group.

IPS used the site to house the school system’s bus-maintenance operations center in the historic Coca-Cola bottling plant. Hendricks plans to integrate much of the 285,000-square-foot building into its project.

The art-deco plant, designed by Rubish & Hunter and built by the William P. Jungclaus Construction Co., opened in 1931 and once churned out 2.3 million Coca-Cola bottles a week as the largest bottling facility in the world. IPS bought the building in 1969.