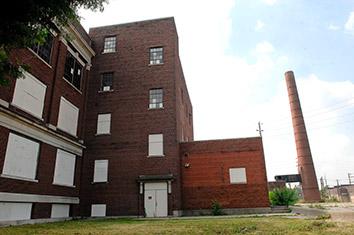 Chartered by the city of Indianapolis, Purdue Polytechnic intends to offer a curriculum designed for STEM-related fields and serve as a pipeline for students to Purdue University. It will focus on enrolling low-income and minority students.

The school is viewed as a catalyst for helping rejuvenate the Englewood neighborhood. But its future at the site is now in doubt because officials have concluded the tab for renovations would be millions of dollars more than anticipated.

On Thursday, Purdue Polytechnic announced that it has signed a lease to occupy space in The Union 525 building at 525 S. Meridian St. in downtown Indianapolis. The building opened in 1895 as the Industrial Training School and today is home to several tech companies.

The high school will occupy nearly 16,000 square feet and could be there up to two years, said Scott Bess, head of the school. While initially occupying a temporary site was expected while the P.R. Mallory building underwent renovations, Bess told IBJ the school still is evaluating options for a long-term home. They could include the P.R. Mallory building, a site elsewhere on the property, or a few other sites.

“We’re still interested in that property, whether it’s that building or something on that site,” Bess told IBJ. “But we have to hedge our bets. We’ve got to have other opportunities.”

Purdue is willing to spend up to $4 million to renovate the building but needs an additional $5 million to $7 million from outside sources to repair its exterior, Bess said.

Those additional costs have placed the school’s move there in limbo.

“All of a sudden the numbers kind of spiral on you,” he said.

At its height in the 1960s, the P.R. Mallory building employed 1,500 workers making dry cell batteries. Employment began to decline in the 1970s as Mallory sold off various business units. The structure now is owned by the city.

All that remains on the site is CMW Inc., which bought Mallory’s electrical-contact manufacturing operation in 1978. CMW, which also produces high-density metals and welding products, employs about 100 people in buildings formerly part of the Mallory complex. Those buildings are south of the four-story structure originally intended for the school.

At the October announcement, leaders acknowledged that renovations to the building weren’t expected to be finished before the 2018-19 school year.

“We’re hopeful, but obviously everything wasn’t nailed down then,” Bess said. “We had to announce something someplace, so we did it there.”

In the meantime, the city has been trying to gain control of the CMW property, which is the subject of a property tax dispute with the owner. But Jeff Bennett, the city’s deputy mayor of community development, said owning the adjacent building is not integral to Purdue Polytechnic’s moving there.

Even if the school decides not to occupy the P.R. Mallory building, there’s still land available at the site on which to build, if Purdue would find that to be a cheaper alternative, Bennett said.

“”For us, we just know the value that a high-quality school brings to a neighborhood,” he said. “But we knew from the beginning that Purdue was going to need an interim location no matter what."

The school plans to start with 150 freshmen and build up to four high school grades. If it ultimately occupies the P.R. Mallory building, it would take the top two floors, with other tenants on the bottom two of the four-story structure.

The area surrounding the P.R. Mallory building is in such neglect that the Local Initiatives Support Corp. of Indianapolis has named it one of six neighborhoods targeted by its Great Places 2020 initiative.

The citywide effort led by LISC aims to funnel private-sector investments into neglected neighborhoods. More than 50 partner organizations have committed $105 million to the effort, including $50 million from New York-based LISC—funds that will help leverage additional private investment.

But that doesn’t diminish what the school could bring to the neighborhood.

“There are some things that need to come together,” he said. “But I think it’s still a location that makes a lot of sense. Everybody wants it to happen. It’s just figuring out how.”