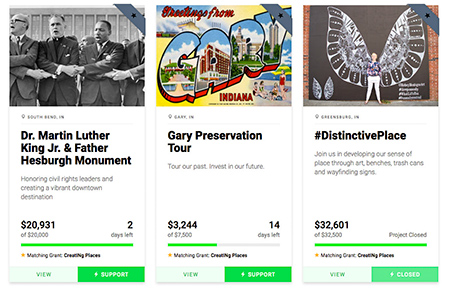 Indiana cities are trying to harness the power of the online masses to support local quality-of-life projects.

Eighty-nine people chipped in online to raise $82,659 to build a riverfront plaza in Wabash.

Ninety-four people raised $54,803 to support a community-theater project in Indianapolis.

And the projects—part of an effort to inspire place-making across the state from the Indiana Housing and Community Development Authority—keep coming.

The idea of “CreatINg Places” is to reward Indiana municipalities and local not-for-profits that conduct successful online grass-roots fundraising campaigns with matching grants to make their public-improvement projects a reality.

The agency has set aside $1 million for matching grants. Applicable projects (which cost between $10,000 and $100,000) include those that make streetscapes more beautiful and walkable, that develop and activate public plazas, that provide access to public amenities, or that enhance parks, support farmers markets and more.

Here’s how it works: An online fundraising page outlining a project goes live, with a deadline for meeting a private fundraising goal. State money is rewarded only to the projects that meet their goals.

“Generally, when there are projects that seek state funding, we either fund them or we don’t,” said Brad Meadows, spokesman for the state development authority. “This really requires some upfront work from the community. … It’s all dependent on the local community buying in.”

The state is working with civic crowdfunding-platform Patronicity to host the projects online.

Veronica Watson, director of Indiana operations for Patronicity, said the effort—which officially launched in late 2016—is “just now starting to really catch on.”

Two Indiana projects on the site are currently ongoing. A South Bend effort to raise $20,000 for a statue of Dr. Martin Luther King Jr. holding hands with the Rev. Theodore Hesburgh, the former president of the University of Notre Dame, has already surpassed its goal. And a campaign to raise $7,500 for a Gary preservation tour has more than a week remaining with about half the funding raised.

The program has “been getting a few more applications each week, which is really exciting,” Watson said. “There’s a lot of chances for communities to use this and create really great public spaces in their community and, even better, engage their residents and visitors. I’m excited to see what communities come up with.”

Crowdfunding has exploded in recent years through platforms such as Kickstarter and GoFundMe, which have offered entrepreneurs and others the chance to use their networks of social media friends and the online public to act as their own network of venture capitalists.

Using the same method to support civic projects has several benefits, Watson said. Patronicity is working with Michigan and Massachusetts on similar efforts.

“It’s a really great way to get the everyday resident and everyday citizen involved and excited about a project,” she said. “You might do a town hall where the same people are always showing up. This provides an opportunity to involve people that might not attend those or raise their voices.”

Watson said she hopes it also helps citizens feel more ownership of projects once they come to fruition.

“If I’m putting in my $5, I have some responsibility for that space,” she said. Its “maintenance and sustainability is better ensured.”

Meadows said the state is “happy with the way the program has gone so far” and is eager for more Indiana cities to take part.

“The idea behind these projects is that they allow us to activate a public space or community place,” he said. “It’s taking a common area that anyone in the community can access and making it a place where they want to go and spend time.”

Meadows said “the sky is the limit” on creative ideas that can be supported with state money.

For instance, the sole Indianapolis project funded through the effort—developed by the Harrison Center for the Arts—is much more involved than installing new benches or public art.

Harrison’s project is called “Pre-Enactment Theater,” which Harrison Executive Director Joanna Taft describes as “quality-of-life planning through theater.” She said it will be similar to a re-enactment at Conner Prairie—only it will envision the future instead of the past.

Harrison—along with several other theater groups, community groups, businesses and schools—is planning to transform a three-block commercial stretch of 16th Street into an “urban commercial corridor where actors and actresses will depict the neighborhood that ought to be.”

The actors will perform for one day in October, but all year long the community will work on quality-of-life planning.

“We hope it will lead to a physical change in the neighborhood,” Taft said, “but it will also bring a social change.”•