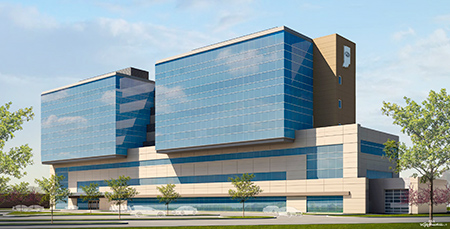 A sprawling campus on the edge of town is out. A compact, modern tower in the central city is in.

Small windows and fluorescent lights are out. Large windows that let in plenty of natural light—and LED fixtures that can be adjusted to change colors and brightness to mimic circadian rhythms—are in.

Indiana’s newest state psychiatric hospital, which is about to rise on the campus of Community Hospital East, will stand in stark contrast to other mental health institutions around the state, in both design and treatment of patients.

The 159-bed facility, called the Indiana Neuro Diagnostic Institute, is designed to fill a critical gap in the state’s mental health landscape.

When it opens next year, it will serve as a central, flagship facility where doctors can assess and diagnose patients with acute and chronic mental health conditions, addictions, developmental disabilities, traumatic brain injury and degenerative illnesses.

It will be Indiana’s first new psychiatric hospital in more than 50 years, replacing Larue D. Carter Memorial Hospital, on Cold Spring Road, which the state plans to phase out of operation.

The state announced the project in 2015, and has spent months since then developing it with architects, engineers and designers. In a recent interview with IBJ, officials rolled out the blueprints and discussed design highlights.

The $120 million project represents a major about-face for psychiatric care in Indiana. In the 1970s and 1980s, Indiana closed seven of its 13 psychiatric hospitals, as many other states were doing during a wave of mental health deinstitutionalization.

That led to a huge shift in patients seeking care elsewhere, often in more expensive and less therapeutic settings, including prisons, according to a study commissioned by the Indiana Family and Social Services Administration.

The study noted that about 6,000 inmates in Indiana prisons, or one of every five prisoners, have been diagnosed with mental illness. It said Indiana has declined to 44th out of 50 states in access to mental health care, hospital services for the mentally ill, and treatment outcomes.

“As state hospitals have closed, patients with chronic psychiatric disease and relapsing chemical dependency have moved to nursing homes, become homeless, been cared for in emergency departments and general hospitals, and (most disturbingly) ended up in Indiana jails and prisons,” the 2015 report said. “FSSA deeply desires to counter this failing model.”

The new model: Get patients accurately diagnosed at the Neuro Diagnostic Institute, with a wide variety of tools, including brain imaging and psychological tests. Then draw up a treatment plan, get the patients stabilized, and discharge them within a few months.

Afterward, psychiatrists can follow up with telehealth consultations over the internet to health care providers around the state, including Indiana’s 25 community mental health centers.

The new model’s shorter stays, often less than two months, will allow the hospital to serve 1,500 patients a year, about 10 times as many as at Larue Carter.

It’s a radical break from generations ago, when patients with mental illnesses often were warehoused far from the general population, sometimes for decades. That approach then swung to the opposite pole, with hospital closures.

State officials hope the new hospital will provide a stable middle ground, and with a fresh approach to mental health.

Central to the new approach: a modern design that breaks from the institutional look of past generations, when imposing structures were built on immense campuses far from the center of town.

Four of Indiana’s remaining six psychiatric hospitals were built before 1900, before electricity or modern plumbing. For years, some operated farms, with livestock, vegetable gardens and wineries. Patients worked on the farms as part of their therapy.

“Patients were kept in a place of asylum, a place of safety, and they lived in a kind of a village,” said Dr. Jerry Sheward, a psychiatrist and the new hospital’s chief medical officer. “They worked on farms at the hospitals as part of their care, because we didn’t really have anything we would call active treatment.”

The new hospital, by contrast, will be built in the heart of the city, deep in an older neighborhood near East 16th Street and North Ritter Avenue.

The two hospitals will be connected by walkways, allowing the mental health patients to have other health needs addressed at Community without an ambulance ride to a faraway hospital. Patients with mental illness often suffer from other chronic diseases, such as diabetes, obesity, sleep apnea and high blood pressure.

The architectural design is a big jump as well. Instead of sprawling horizontally, like Indiana’s other psychiatric hospitals, the Neuro Diagnostic Institute will soar seven stories. The first three floors will house administrative offices, conference rooms, rooms for patients recovering from surgery, and classrooms for school-age patients.

The upper floors will house patient dorms, activity areas, a gymnasium, treatment rooms, demonstration kitchens and retail shops. Upper floors will be divided into two sections or “cubes”—areas about half the size of a hospital floor, meant to provide a more comfortable, intimate feel, with spaces where patients can mingle.

It will also cut down on long hallways and blind turns, and allow nurses and other staff members to keep an eye on patients from a central station.

“It’s going to feel like a neighborhood,” Sheward said. “It will be a comfortable space, with patients moving around with enough frequency for treatment or group therapy or in the gym, getting them into a comfort zone and reducing the institutional feel.”

Some mental health advocates applaud the state’s new approach. The Indiana chapter of the National Alliance on Mental Illness, a not-for-profit representing families and people affected by mental disorders, called the new hospital “an invaluable addition” to the state’s mental health system.

“The NDI will offer life-changing services for thousands of Hoosiers with brain-based disorders,” the group said in a statement.

But it also expressed concern about the loss of extended-care beds for people with serious and persistent mental illness. Further, the group said it was “impactical” to assume that adding short-term and specialized units would make up for that loss.

The hospital’s design—more comfortable and interpersonal—is growing in popularity, say some architects who specialize in behavioral health construction.

“There was a time that a psychiatric hospital had dozens of bedrooms along corridors, and then a big open space. We don’t do that anymore,” said Timothy Rommel, principal with Cannon Design of Grand Island, New York, which designed Indiana University Health’s Neuroscience Center, opened in 2012 just south of Methodist Hospital on West 16th Street.

He added: “What we’re trying to do is make these facilities softer, a less confrontational environment. Some people use the term ‘homelike.’”

Other experts point out that new designs help decrease the negative stigma of psychiatric care, while still offering care and safety.

Another big difference: Modern psychiatric hospitals, including the Neuro Diagnostic Institute, are designed to be more colorful, filled with natural light, bright artwork and bright walls. Some of the artwork will be nature-related, to help patients connect with the outside world.

The artwork actually will be an integrated piece of the wall, serving both as an aesthetic enhancement and as wall protection, said Bryan Sander, lead project architect with BSA LifeStructures in Indianapolis.

“It is meant to be durable, to handle being hit or scratched,” he said.

The hospital will feature an adjustable LED system, allowing the staff to dim the lights in the evening, as well as remove the blue wavelengths from the light, to more accurately represent sunsets and to prepare the brain for sleep.

“People with psychiatric disorders often have a terrible time with sleep,” Sheward said.

Although the hospital will not have a farm, like some of its predecessors, patients can still go outside for fresh air—either on the grounds or on terraces on the upper levels.

The rooftop of the connector building that links the two hospitals will have a fenced-in space for children, with rubberized flooring and areas for play and quiet activities. About 25 percent of the patients are expected to be under 21.

The state expects to start work this year and finish in September 2018. It will pay for construction by selling 20-year taxable bonds.•