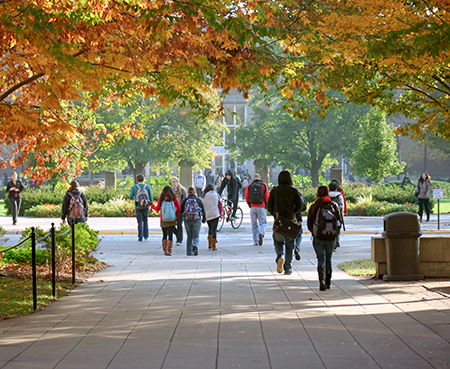 Now, the freeze is scheduled to continue through 2019. In-state students will still pay $10,002 for annual tuition two years from now, the same as in 2013.

And Daniels is as surprised as anyone.

But the result of the freeze is that, “just in nominal dollars, it will be less expensive to come to Purdue in 2019 than it was in 2012,” Daniels said. “We’ve looked. There’s no other school in that zone.”

Daniels was right that students would reward Purdue for that decision: It was flooded with a record 48,000 applications last year. But he says now that he misfired on his original notion that his idea would be replicated broadly.

There are several examples of U.S. colleges that have frozen tuition by force or by choice—including Indiana University since 2015. But overall, tuition has continued to rise at public, four-year institutions, albeit more slowly than before, even as the debate about college affordability has reached a fever pitch.

Average tuition and fees at public, four-year schools increased 9 percent in 2016 dollars over the five years from the 2011-2012 school year to 2016-2017, according to the College Board. That follows a 29 percent increase over the previous five years.

“I thought that all schools would be forced into much more moderation in pricing, and I was wrong,” Daniels said. “We’ve been allowed here at Purdue to be completely differentiated from the market. They all lived in a world where a high sticker price was associated with quality and some of them are still there. I am surprised that it hasn’t happened more broadly.”

Now, questions are simmering at Purdue about how long the freeze can continue and whether the choices that have made it possible are in the best interest of maintaining quality.

“It’s a tense environment,” said David Sanders, an associate professor of biology and outgoing chairman of Purdue’s University Senate. “There is widespread discontent about the squeezes on departments. The lack of sustainability … that’s a concern of all of us.”

The backdrop is a higher education sector that’s still debating how college costs got out of control, what it means to be affordable, and who should be responsible for reversing the trend of steep increases.

Daniels, for his part, has developed his own litmus test for continuing the freeze.

“As long as you can satisfy [three] conditions—protecting the financial strength of the school, investing aggressively in a stronger tomorrow, ensuring a quality educational experience for our students in terms of the quality of our faculty—why would we take more money from students?” Daniels said.

Exploring how the freeze has remained financially viable for Purdue is critical to understanding its impact on the institution.

Purdue estimates it has forgone $70 million in tuition revenue from 2014 to 2017, assuming a 2.5 percent annual increase, according to a January presentation to faculty from Purdue’s treasurer, Bill Sullivan. It has also estimated that its students have saved more than $226 million—including interest payments—as a result of the freeze.

Daniels said what has made the freeze possible is a combination of spending cuts, an overall strong financial position, and a decision to grow the university’s enrollment.

He has been on a cost-cutting mission since arriving at Purdue, tackling everything from changing the university’s health care plan to contracting out for printing costs and transportation, to removing landlines from student dorm rooms.

“Efficiencies have helped enable the freeze, but the freeze has helped enable efficiencies,” Daniels said. “When you just draw a line and say, ‘That’s it,’ they look around a little more closely and discover there are things they could have gone [without].”

Revenue at Purdue has remained roughly flat at $2.1 billion since 2013, except for 2014 when Purdue took in $2.3 billion. And in each of the last four fiscal years, the university has spent less than it has taken in.

Purdue has also embarked on a plan to grow the student body. Though final numbers aren’t out yet, Daniels said the freshman class “might be 1,000 students more than four years ago.”

“That’s another way you make ends meet,” he said.

But another mix of structural realities is at work that also makes the freeze possible—with some components more controversial than others.

First, state tuition support for higher education, though down from what it used to be, has been on a slight upswing the past four years as the state has emerged from the Great Recession.

Purdue reported to the U.S. Department of Education that it received $305 million in state appropriations in 2015, a 7 percent increase over the 2013 state investment of $285 million. However, state support is still below 2009 levels, when Purdue received $309 million.

And Purdue’s ratio of out-of-state to in-state students is also rising, with non-residents now making up about 55 percent of enrollment. Four years ago, non-resident and resident enrollments were essentially even.

Daniels downplayed that demographic change. “If it’s changed, it’s by a point or two,” he insisted.

Aaron Hedlund, an assistant professor of economics at the University of Missouri who is studying college costs, said increasing the ratio of out-of-state students is a common university tactic to try to keep costs down for students.

“It’s been a way to keep bringing in additional revenue without hitting the people who are politically the most sensitive to this stuff,” Hedlund said. “But in practice, if there are fewer spots at Purdue for you now, that’s not increasing affordability for people in the state.”

For now, Purdue’s continued freeze still comports with guidance from state officials. The Indiana Commission For Higher Education recently recommended that state institutions hold annual increases in undergraduate tuition and mandatory fees flat and said any increases should be “no more than 1.4 percent in each of the next two years.”

“If we’re telling people that education beyond high school is more important than ever, they have to [be able to] afford it,” said Teresa Lubbers, Indiana’s commissioner for higher education.

Is it worth it?

Meanwhile, the higher education sector is rife with debate about how long the freeze will remain feasible.

“Mitch Daniels cannot reverse the laws of gravity,” said David Feldman, a professor of economics at the College of William and Mary in Virginia who studies college costs. “If you’re going to hold tuition fixed in a world in which higher education costs tend to rise, the only way you’ll be able to do that without cutting the quality of your offerings is if some money shows up from some other source.”

If not, Feldman said, “you either have to presume that there is a tremendous amount of waste sitting on the floor, or you’ve got to cut costs in the way that is going to cut bone.”

Lubbers said she doesn’t believe Purdue or the rest of Indiana’s colleges have approached that watermark yet.

“We believe that there is still the possibility in the foreseeable future of not increasing tuition and finding savings within systems,” she said. “Maybe they ring every dollar out, but we’re not there yet.”

“A lot of schools under financial pressure, they have been offloading more and more of the work to adjunct faculty or so-called contingent faculty,” Daniels said. “We’re always going to want to keep investing in the future excellence of Purdue.”

Adjunct faculty levels at Purdue have not changed since 2013, and the number of tenured and tenure-track faculty has risen slightly.

But some faculty members have argued that the tuition freeze is creating a strain that will ultimately affect the quality of the student experience.

Sanders said the campus has “a fair amount of deferred maintenance,” pointing to significant concerns like undergraduate student laboratories he said need to be updated, and to the seemingly mundane, like peeling paint at one of the entrances to Stewart Center, a main Purdue building.

The cuts weren’t all bad, Sanders said, and he acknowledged the popularity of the freeze among students.

“I don’t want to take away from the achievements that are and continue to be made,” Sanders said. “It’s nice that the university was able to make changes that reduced room and board rates. That encourages students to be on campus. I’m willing to embrace that.”

But he warned that “perpetual growth of the student body” could put even more stress on already scarce dollars.

“As we see a push toward larger classes and a push toward saving money by eliminating smaller, more specialized classes, that has an impact on culture,” Sanders said.

Who’s at fault for college costs?

Meanwhile, the debate on how to achieve college affordability is still raging as tuition prices continue to rise. One of the challenges, said Lumina Foundation President Jamie Merisotis, is that there’s little consensus on what affordability truly means.

“Individual institutions try to make their case to you that they are a good value, and I think that’s good as a marketing effort,” Merisotis said. “Affordability should really be a measure of ability to pay, not of the price that’s charged. We’re not there yet in higher education.

“We can and should applaud Purdue for what it’s doing, because it’s made an effort to freeze tuition, but the question is, relative to what?” he said. “You’ve got to have a benchmark that says what affordability is. These conversations tend to take place in a vacuum.”

But most agree college costs are too high.

Tuition cannot continue to increase “at twice the rate of inflation,” Hedlund said. “You do have some students graduating with tons of debt, and income prospects that don’t allow them to repay it.”

Some experts have argued that declining state support is primarily to blame, and that states need to pick up a higher share of the cost.

Average state and local government support per student is 17 percent below 2008 levels, according to the State Higher Education Executive Officers Association. And in 2016, the share of educational expenditures supported by tuition from students was nearly 48 percent. It was 35.8 percent in 2008 before the recession hit.

“Higher education is the easy target in many state legislatures and you should not balance the state budget on the backs of students,” said Samuel Dunietz, a research and policy analyst at the American Association of University Professors, an advocacy group for faculty. “In some cases, schools will raise tuition to compensate” for lower funding.

But others argue that increasing state funding wouldn’t truly address the problem because, if taxpayers pick up more of the bill, that’s just shifting the cost around.

Merisotis said he believes Purdue has largely found the right strategy. He said he is encouraged by Purdue’s work with trying to find efficiencies on campus and with some of its delivery-model innovation efforts, such as competency-based education, where students might be able to incur less expense by graduating early.

“Creativity on the price side is good, but I continue to think that delivery-model changes are going to be the important thing for colleges to focus on, because too much of the delivery model is not sustainable long term,” Merisotis said. “Purdue should be applauded for the fact they keep trying to experiment with new things on both sides of the equation. Given the increasing pressures on higher education, it’s the right model.”•