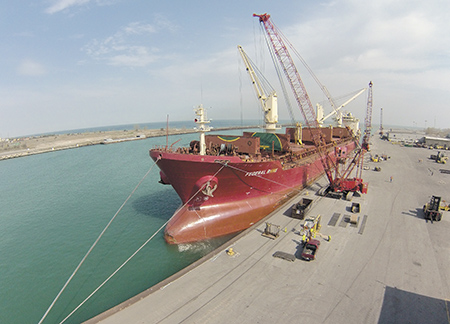 Indiana may be landlocked by most definitions but its waterborne cargo traffic still ranks 11th in the nation—a position that might rise if the state expands its port system as planned.

Gov. Eric Holcomb is pushing forward with a proposal to locate a port along the Ohio River in southeastern Indiana, likely in Lawrenceburg, where officials hope to redevelop the site of a former power plant.

If successful, the move would give Indiana its third port on the Ohio River and fourth port overall. Already, ports in Jeffersonville and Mount Vernon move goods to and from Indiana along the Ohio, downstream to the Mississippi River and out to the Gulf of Mexico.

The state’s oldest port, at Burns Harbor on Lake Michigan, welcomes ocean barges that make their way through the Great Lakes.

Combined, the ports—through water, rail and road—are a pass-through point for 25 million tons of cargo each year and form an important—if not little known—part of Indiana’s infrastructure system. Grain, coal, steel, fertilizer, limestone, ethanol, salt and other products move by ship to and from the state.

“Waterborne [transportation] is really important to Indiana, and most people don’t even think about it,” said David Holt, vice president of operations and business development at Conexus Indiana, the Indianapolis-based group that supports the state’s logistics and advanced manufacturing industries.

Still, the group hasn’t yet taken a position on whether to support the proposal to build a fourth port. Holt said his organization is doing its due diligence on the topic now, and he plans to bring it up at a board meeting later this year to determine how Conexus might get involved.

“If there’s a need, then obviously this is a very positive development,” Holt said

Already, the state’s three existing public ports contribute more than $6 billion annually to the state economy, supporting more than 51,000 jobs around the state, according to the Ports of Indiana, the regulatory agency that oversees the locations.

And the impact is not only limited to the state’s northern and southern borders.

From aggregates used in road construction to steel for automakers and fertilizer for crops, things that arrive in Indiana via port make their way all over the state, officials said. Likewise, the ports also serve as a departure point for Indiana products bound for other states and other countries.

“Absolutely, cargos moving to and from our ports now do move through Indianapolis on a regular basis,” said Ports of Indiana Vice President Jody Peacock.

Indiana’s newest port, in Jeffersonville, opened in 1985. Since then, Peacock said, many communities have contacted the Ports of Indiana urging the agency to consider building a new port in their area.

“We’ve looked long and hard at many options,” Peacock said.

The efforts gained more public attention in January 2016, when in his State of the State address, then-Gov. Mike Pence called on the state to “vigorously” explore building a new port in southeastern Indiana.

Since taking office earlier this year, Holcomb has also spoken publicly in support of a new port.

At an American Association of Port Authorities Commissioners seminar last month, Holcomb told the group that the state is “fully committed to developing a fourth port in southeastern Indiana in the Lawrenceburg/Cincinnati area,” according to notes from that event provided by the Governor’s Office.

And during the 2017 legislative session, lawmakers created a $15 million Business Promotion and Innovation Fund that can be used by the Indiana Economic Development Corp. for a handful of specified activities. Work to establish a new port is one of those permitted uses, although the plans remain in the earliest stages.

The state has zeroed in on a potential site: the former Tanners Creek power plant in Lawrenceburg. In October, St. Louis-based Commercial Development Co. Inc. acquired the site from Indiana Michigan Power.

Commercial Development Co. has started demolishing the existing structures on the site and the state is in active negotiations to acquire the property.

Other aspects of the project—how much it could cost, where the funding would come from, when it might open, whether it will be built at all—are not yet known, Peacock acknowledged.

“We’re very optimistic about the project but there still needs to be a due diligence process,” Peacock said. “These are long-term developments. It’s looking decades into the future.”

Once the state takes ownership of the Tanners Creek property, then it would need to analyze the site. How much of the acreage is suitable for building? What lingering environmental issues need addressing? Are local rail lines sufficient to handle port traffic? Do local roads need upgrading to handle heavy loads? All are questions yet to be answered.

“We need to make sure that this site’s viable for future development,” Peacock said. “When you’re developing a port, you just never know what you’re going to run into.”

As points of comparison, Peacock said, it took more than 40 years to develop the port at Burns Harbor. Jeffersonville took more than 15 years, while Mount Vernon took only a few years.

Peacock declined to say what a new port might cost, saying that even a “back-of-the-envelope” estimate would be premature at this point.

“There are too many unknowns when you’re going into a project like this.”

What is certain, Peacock said, is that business is booming at the state’s three existing ports, which makes the agency think that demand is there for another port.

Over the years, each of the three ports has acquired additional acreage to accommodate growth, Peacock said. And between all three ports, cargo volume over the past three years has hit record highs.

And because Lawrenceburg is part of the greater Cincinnati metro area, an Indiana port in that area could capitalize on the large market, Peacock said.

Indiana’s agricultural industry could benefit from a new port, said Chris Hurt, professor of agricultural economics at Purdue University. Southeastern Indiana is a strong producer of corn, soybeans and wheat, Hurt said, and because ports tend to handle agricultural products from within a 60- to 100-mile radius, a Lawrenceburg port could be useful to producers in that part of the state.

Nationally, Hurt said, about 20 percent of America’s agricultural products are exported. Not all of that moves by water, Hurt said—perishable products like meat and produce require faster delivery options—but water transport is cheaper and it’s an important link to world markets.

“If we’re going to be major exporters, we have to have these links to our customers,” Hurt said.

With its ports, Indiana can offer options for all four modes of transportation: air, rail, roads and water.

That’s important, Tatikonda said, because it gives Indiana more options for multimodal transportation, which is a more economical way to ship products. Still, he offered no opinion about what a Lawrenceburg port might do for the state.

But he said he does have confidence in the leadership at the Ports of Indiana. “If they’re moving forward on this—they don’t do things capriciously. They have a good reason.”•