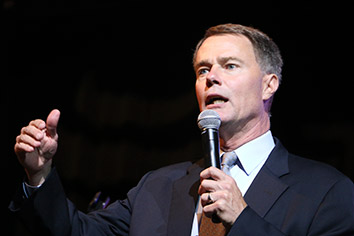 Mayor Joe Hogsett will submit to the Indianapolis City-County Council on Monday night a 2018 budget proposal that he describes as the first structurally balanced budget in a decade while adding police officers and fire fighters, boosting infrastructure spending and raising pay for some city workers.

The budget ultimately must be approved by the City-County Council. It will go through a public hearing process in coming weeks, and the Council likely will pass a budget in October before submitting it to the state.

Thomas Cook, Hogsett's chief of staff, said the mayor asked his administration to write a budget for which “expenditures and revenues were based on sustainable funding sources, not one-time funding sources.”

The balanced budget is made possible in large part because Indianapolis is on pace to collect roughly $60 million in additional revenue. The budget expects an increase in $20 million in property tax revenue—resulting from an improving economy, not a tax increase—as well as $20 million more in new gas tax revenue approved by the Indiana Legislature earlier this year, $6.5 million more in stormwater fees, and a $10 million increase in various grants.

He said the city has been finding ways to cut costs, including eliminating 50 positions as the result of a “smart-sizing initiative” that has saved $2 million, saving $5 million by renegotiating city contracts, saving $900,000 on a new timekeeping system, and saving $250,000 on supplies.

“We went all the way to converting [printers] to double-sided, black and white,” Qaddoura said, emphasizing the lengths his agency has gone to save money.

Hogsett also plans to announce a four-year infrastructure plan that adds about $107 million on top of current infrastructure spending projections through 2021, including spending over three years $39 million that the city received in county option income taxes last year. That money had been sitting in a rainy day fund until now.

Under the budget proposal, the Indianapolis Metropolitan Police Department would receive funding for a new 86-member recruit class, with the hope being that it results in a net of 35 new officers after taking in account retirement and other attrition.

The Indianapolis Fire Department would receive funding for a new 40-member firefighter class.

The budget will also include funding for Council President Maggie Lewis’ plan to increase some city workers’ minimum wages to $13 per hour if that proposal separately passes out of the council.

“We think we can absorb the fiscal impact” of Lewis’ proposal, Qaddoura said.