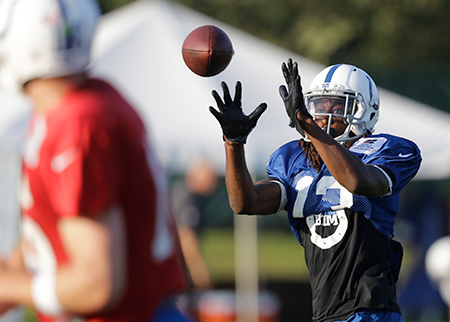 Is Tom Brady really 40? How long will it take before the phrase “Los Angeles Chargers” sounds right? And is there still time to get into the when-does-Andrew Luck-play pool?

I took the NFL Kickoff Information Guide to lunch the other day. Somewhere between the salad and the check, this is what came from it:

The New England Patriots and Kansas City Chiefs meet in the prime-time season opener on Sept. 7. It’s the 10-year anniversary of the last time the Colts played in one of those things—a 41-10 win over New Orleans in 2007. Peyton Manning threw three touchdown passes in the RCA Dome. Seems like light years ago.

Nine of last season’s 12 playoff teams won their openers. If you start 1-0, history says your chances of making the playoffs are 52.3 percent. Go 0-1, and it drops to 24 percent. Did we mention the Colts have lost three consecutive season-openers? And that Luck might throw as many passes in this season’s first game as Jim Irsay?

Last season, 57 percent of NFL games were decided by one possession—as in eight or fewer points. The Colts did their part to help pad the total. Their three defeats within the division were by three, three and five points.

There were 72 NFL games last season in which the winning team trailed in the fourth quarter. The Colts did it four times. The Lions did it eight, the most ever by an NFL team. The first of those eight, alas, was in Lucas Oil Stadium.

The average winning margin in the NFL last season was 10.23, the lowest since 1935. The Colts’ average was 10.44. It’d be even closer if they stopped playing the Pittsburgh Steelers.

Guess which team has the best record the first month of the season in the past 10 years? When in doubt, always go with the Patriots. They’re 25-8. The Colts are 18-15.

The best overall record those same 10 regular seasons? Do you even have to ask? The Patriots’ 126-34 mark is 19-1/2 games better than second-place Green Bay. The Colts are a commendable fourth at 100-60, but the three teams in front of them—New England, Green Bay and Pittsburgh—all have something from those 10 years that Indianapolis doesn’t: a Lombardi Trophy.

The Super Bowl this season is in Minneapolis. You might recall the day that was announced in 2014. They were supposed to say “Indianapolis.” They didn’t. Not to be a sore loser, but would anyone mind if Minneapolis gets 10 inches of snow during game week?

The Los Angeles Rams will travel 32,600 miles this season to lead the NFL. The Colts are far down the frequent flyer miles power ratings, at 25th, with 11,236. Crossroads of America, right? The Steelers are the homebodies of the league, at 6,694 miles.

On Sept. 12, 2010, the Colts opened the season with a 34-24 loss at Houston. It must have been entertaining, anyway. The Texans’ Arian Foster rushed for 231 yards, which is the second-best ever on Kickoff Weekend, and we’re talking going back to 1933. Then again, the same day, Peyton Manning passed for 433 yards, which is the eighth-most. It turned out to be Manning’s last Colts opener.

Using 2016 records as the criteria, the Denver Broncos face the toughest schedule in the NFL. Who’s the lucky team with the cushiest schedule? Your Indianapolis Colts. The combined winning percentage of their 2017 opponents last season was .424.

Fifteen players who were not drafted were named to the Pro Bowl last season. None of them Colts.

That old Purdue Boilermaker, Drew Brees, needs 290 completions to move into second place on the all-time list. He would pass Peyton Manning. That’s Brett Favre out in front.

Tom Brady now has 25 postseason wins as a starting quarterback. He’s miles ahead of anyone else in history, with Joe Montana next at 16. Manning had 14. Luck has three. If Brady gets the Patriots to the playoffs, he’ll become only the second quarterback to start a postseason game at 40. Favre was the other. But Brady is still nearly five years younger than Adam Vinatieri.

Oakland’s Derek Carr became the fifth quarterback to throw at least 80 touchdown passes his first three seasons. He had 81. Dan Marino had the most ever with 98. In between Marino and Carr are horseshoes. Luck had 86 with the Colts; Manning, 85.

The Washington Redskins were the only team in the top five of fewest sacks allowed last season not to make the playoffs. The Redskins gave up 23. Oakland led the NFL with only 18. The Colts? Sigh. Try 44. And you wonder why Luck is still rehabbing?

Aaron Rodgers had the best passing rating in the fourth quarter of anyone in the league last season. Brady was third. Luck was fifth.

Luck threw touchdown passes to eight different teammates last season. Pretty diversified. But Atlanta’s Matt Ryan threw touchdowns to 13. Nobody had ever done that before.

The NFL defines a big play as 20-plus yards. The receiver who had the most of those in 2016 … T.Y. Hilton. Not enough of them to beat Houston, however.

Vinatieri is not exactly Russell Westbrook when it comes to putting up points, but he’s the best the NFL has at the moment. By a lot. Vinatieri is the active career scoring leader with 2,378, with Oakland’s Sebastian Janikowski a distant second at 1,799. Which just shows you that Paul George was not the only guy in town making a lot of three-pointers lately.•