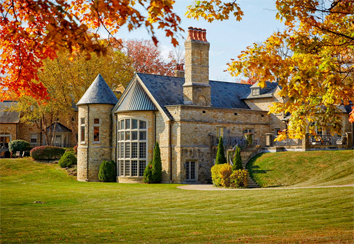 The 24,400-square-foot Carmel mansion owned by tech entrepreneur Scott Jones is officially on the market for a mere $3.9 million.

Jones is listing the home at 1150 W. 116th St. with Nancy Mutchmore at Berkshire Hathaway. The mansion took seven years and $20 million to build.

The 12-acre estate presents a “rare offering,” Mutchmore says in her marketing materials, adding that the home resembles an English country manor with beautiful finishes and stunning craftsmanship throughout.

The $3.9 million asking price tops the $3.5 million that the owner of the former Tim Durham home on Geist Reservoir is seeking. Durham, an Indianapolis financier, was convicted in June 2012 of masterminding a $200 million Ponzi scheme and handed a 50-year prison sentence.

Jones is selling his home as he also attempts to unload its contents at an estate sale running Sept. 14-17.

Fishers-based Aether Estate Sales Co. is coordinating the event, billing it as “one of the best estate sales ever conducted—not only in the state of Indiana, but in the entire country.”

Jones has resided in Hawaii the past few years, prompting him to make his Carmel home and its contents available for sale.

The mansion boasts seven bedrooms, seven baths, a three-story great room with a “towering” stone fireplace, and a play room with a treehouse loft and circular mahogany slide.

Jones reaped his first major success by developing a version of voicemail that achieved wide usage. In 2006, he founded ChaCha Search Inc., a human-powered search engine. Once employing more than 100 people, it shut down operations in December.