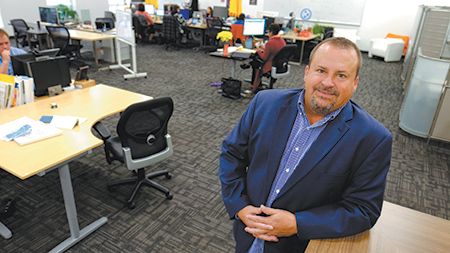 John Wechsler doesn’t like to keep the same job for long.

His resume is cluttered with short stints leading startups. And for the past 20 years, he has followed his passion quickly from one job to the next.

But Launch Fishers—the co-working space he founded in 2012—has provided enough of the excitement Wechsler seeks in a job. So he’s remained its CEO for five years, even though he initially told Fishers Mayor Scott Fadness he’d probably stay only three.

“I definitely have the itch to do another startup,” Wechsler said. “But right now, the impact that we’re having is significant enough it makes me think I should continue to do it.”

What started as an idea to provide space for entrepreneurs to work and grow their businesses in Fishers has ballooned into a statewide brand.

Launch Fishers, which operates under a not-for-profit called Fishers Entrepreneurship Center Inc., today includes an initiative aimed at promoting entrepreneurship across Indiana, a program that allows co-working space members to work at different facilities statewide, and an Indianapolis branch known as Launch Indy.

By early next year, the organization plans to open the state’s first internet of things lab, just down the road from Launch Fishers.

It’s much more than Wechsler and Fadness envisioned more than five years ago when they first discussed creating a co-working facility. But they are excited about the growth and the future.

“This isn’t what I thought I’d be doing at this point in my life, but I love it,” Wechsler said. “And that’s why I keep doing it.”

A traditional co-working space is not what Wechsler initially proposed.

He actually wanted to pursue opening a north-side office of software consultancy DeveloperTown, where he had become a partner in 2011 after leaving a startup in California.

Other DeveloperTown partners preferred keeping the focus on Indianapolis, but Wechsler had the itch to do something in Fishers.

As he started searching for workspace, Fadness suggested the basement of Hamilton East Public Library, which hadn’t been used for years. Wechsler wasn’t interested.

“He’s like, ‘I’m not going to the basement of the library,’” Fadness said.

But after touring the space, Wechsler and Fadness saw the potential. And with $350,000 in funding from the then-town of Fishers, Launch opened in the 16,000-square-foot basement in 2012.

It was outfitted mostly with Ikea furniture that Wechsler bought at the store near Cincinnati. Wechsler and Fadness even assembled the pieces.

“We had a shoestring budget,” Fadness said.

The goal was 200 members in two years, but membership quickly surpassed that.

In April 2015, the city purchased the former Deca Financial Services LLC building for $3.1 million to provide a much bigger home for Launch Fishers. The city also spent about $400,000 to renovate the 51,000-square-foot facility.

Launch Fishers moved in spring 2016 and today has more than 600 members.

Wechsler said Launch has proven to be a successful model, despite the growing number of nearby co-working spaces, because it’s focused on culture rather than just an interesting space.

“Our approach has always been to look at the function of the space first, not the form,” Wechsler said. “You look at the culture you’re trying to develop and you build around that.”

John Hurley, CEO of SmartFile, said Launch Fishers is “so much more than” just space.

He said Wechsler’s focus on building the right environment, regardless of the physical details of the facility, has helped the brand grow.

“It’s not necessarily how cool your space is, it’s how cheap it is,” Hurley said. “You don’t need the best furniture.”

But there is some question about whether a publicly supported co-working model is the best long-term strategy.

Michael Hicks, director of the Center for Business and Economic Research at Ball State University, has been researching the impact of publicly funded co-working spaces, incubators and maker spaces. He said early results show the facilities do not boost local employment or wages.

“I’m not against these, but I think the evidence is pretty clear right now that these are not causing economic growth,” Hicks said. “The public support for subsidization is going to wane.”

He said the facilities often discourage private-sector investment in similar operations. Hicks said a private investor likely would have opened something similar in Fishers without public dollars if Launch didn’t exist, because of demand and Fishers’ quality-of-life amenities.

“Mayor Fadness is right in identifying that small-business growth and entrepreneurship is important,” Hicks said. “You got the diagnosis right. The prescription is wrong.”

Fadness and Wechsler disagree, though, and point to the city’s growing tech scene and companies that have already expanded beyond Launch, like Bluebridge Digital LLC and Iconic Digital Marketing. And they agree public funding was essential.

“Without the city’s involvement and the mayor’s leadership in this, none of this happens,” Wechsler said.

Within a couple of years of opening, the Launch brand evolved beyond a co-working space in a library basement.

In 2014, Wechsler helped create the Indiana Coworking Passport and formed Launch Indiana, which are both aimed at connecting entrepreneurs throughout the state.

The passport program allows members of the 47 participating Indiana facilities to receive one free day-pass per month to any of the other co-working offices, which are are not charged to be included.

Launch Indiana is designed to help communities start co-working spaces and connect entrepreneurs to resources and experts. It’s a branch of Launch Fishers, and the state’s Office of Small Business and Entrepreneurship contracts with Launch Indiana to help with specific initiatives.

And earlier this year, Wechsler expanded the physical presence of Launch by opening a co-working office in downtown Indianapolis called Launch Indy.

The facility is in The Union 525, a for-profit venture that offers short-term office leases to growing tech companies and is backed by Hurley and three real estate investors.

Hurley said co-working was a natural fit for the building. “We had options in terms of who we wanted to bring in and facilitate this part,” Hurley said. “John was the first person I wanted.”

Wechsler said the space in The Union made sense for the second Launch location because the infrastructure was already in place and Launch Fishers staff can help run it.

That means costs have been minimal, so the new facility isn’t “under the gun” to ramp up membership numbers quickly. When Launch Fishers opened, membership fees were immediately used to pay the bills, Wechsler said.

Unlike the government partnership for Launch Fishers, the city of Indianapolis is not involved financially at the new location.

Even with the expense of adding ventures, Launch Fishers’ budget has been in the red only once since 2012 and has seen annual revenue growth since 2013, according to public tax documents.

Fishers Entrepreneurship Center Inc.’s revenue spiked from $540,000 in 2014 to $1.3 million in 2015, thanks to an increase in program-service dollars that come mostly from corporate sponsors.

In 2015, the latest year for which tax documents are available, Launch attracted $768,550 in corporate sponsorships. Membership income brought in $138,050.

The biggest expense for the organization is salaries and wages, accounting for $342,000 in 2015.

Wechsler said the group has about a dozen employees, and that includes three staff members who run the Launch Fishers coffee shop.

The “Launch” brand is not trademarked, copyrighted or protected in any similar way.

Wechsler said he started the Launch brand for the good of the community, and he shares his ideas and methods with leaders trying to replicate what he’s done.

“We do have an identity we want to manage,” Wechsler said. “But we wanted to kind of open-source this to the community.”

Dozens of mayors and state and federal elected officials have toured Launch Fishers, including Vice President Mike Pence while he was governor.

“We share everything we can,” Wechsler said. “All of them are curious. … This place, when it’s buzzing, it has a feel to it that’s hard to explain.”

Shelley Klingerman, executive director of Launch Terre Haute, said that facility would never have opened without help from Wechsler and Fadness.

“What they were doing made a lot of sense,” Klingerman said. “We adopted it, and it stuck.”

But even though Launch Terre Haute shares the name and the group’s best practices, it operates as a separate entity.

“We believe in this pursuit for all of Indiana,” Fadness said. “And it’s not really a competitive thing.”

The latest expansion for Launch and Wechsler is the Indiana IoT Lab—Fishers.

The 24,562-square-foot facility at 9059 Technology Drive, deemed to be the state’s first internet-of-things lab, should open early next year, Wechsler said.

“There’s a lot of excitement building around that,” Wechsler said.

More IoT labs and co-working spaces could open through the help of Launch Indiana, but those might be independent entities, not connected to the Launch brand, according to Wechsler.

Wechsler hesitates to predict what’s beyond that.

“We always have our eyes on how this can impact the broader state economy,” he said. “There’s so much that changes in such a short period of time.”

Fadness predicted that Wechsler will stay put at Launch—at least for now—because he’s passionate about connecting entrepreneurs. But they are planning for a future without either of them involved.

“We are trying to build a team of people around us,” Fadness said. “We want to make sure this initiative, this momentum, doesn’t die with the two of us.”•

Editor’s note: IBJ pays for a Launch Fishers membership for North of 96th reporter Lindsey Erdody so she has a place to land between assignments.