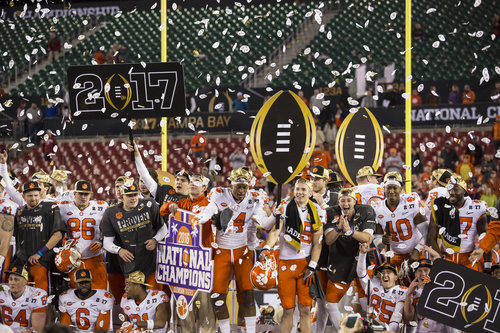 The game will be played Jan. 10, 2022, in Lucas Oil Stadium to decide the champion of the 2021 season. It will be the first time Indianapolis has hosted the event.

The game and related activities are expected to draw 100,000 visitors to the city and have a $150 million economic impact on the region, Visit Indy officials said.

Former Indiana Sports Corp. Chairman Michael Browning said the city did not make a formal bid for the game. Instead, the city was asked in September if it could host the game and iron out the details within six weeks. City officials did not say how much they would need to spend to host the game.

A typical Final Four men's basketball tournament has an economic impact in the $80 million range, according to Visit Indy. Indianapolis last hosted the Final Four in 2015 and is expected to host it again in 2021.

In 2015, the Indiana Sports Corp. and city officials studied the possibility of hosting the national championship football game, but ultimately decided not to pursue the event.

ISC President Ryan Vaughn said in 2015 and again last year that his organization would continue to consider bidding on the game based on the city’s events calendar and corporate support, among other things.

This season will mark the fourth that the college football national champion will be determined by a four-team playoff.

From 1998-2013, the BCS National Champion was determined by pitting to top two ranked teams based on regular-season results. That game was always played as one of the bowl games and in the already established venue for that bowl.

The 2014 season—which culminated in the 2015 national championship game—marked a shift. The two semifinal games were played as bowl games and in the historical sites of those games, while the championship game's location went up for bid.

This season’s national championship game is set for Atlanta, with the 2019 game in Santa Clara, California, and the 2020 game in New Orleans. The new Hard Rock Stadium in Miami Gardens, Florida, will host the 2021 title game. Los Angeles announced Wednesday that it landed the 2023 game. Houston will host it in 2024.

Indianapolis is no stranger to hosting big-time college football games. Lucas Oil Stadium has hosted the Big Ten Championship football game every year since it launched in 2011.