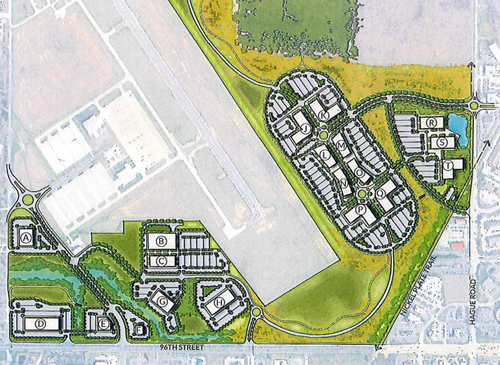 The amount of land available for commercial development within the city of Fishers is about to increase substantially.

A plan created by Fishers officials and approved Friday by the Indianapolis Airport Authority shows how 211 acres at Indianapolis Metropolitan Airport could be transformed into offices and uses such as research, development and light industrial activity.

“We think that this space could hold up to 1 million square feet of commercial space, which is massive,” Fishers Mayor Scott Fadness told the IAA board.

The property in question is not needed for aviation use at the 445-acre airport. For the past two years, the IAA, which owns the Fishers airport, has been working with Fishers officials to find commercial uses for the land. (A map of the plan appears below; click for larger view.) 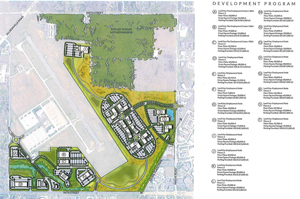 In all, the plan shows where 20 different buildings could be sited on the property northwest of 96th Street and Hague Road. All are proposed as two-story structures.

The plan calls for Fishers to take the lead on marketing the property. On Monday, Fishers City Council will consider an agreement to work with real estate brokerage JLL for this purpose.

IAA prefers to retain ownership of the land and lease it out to tenants, but the airport authority is open to considering land sales, said IAA board member Steven Dillinger. Dillinger is also a member of the Hamilton County Board of Commissioners.

Even though active marketing efforts haven’t started yet, Fadness said the city has already had discussions with “three or four” companies potentially interested in moving to the airport site, representing a mix of existing local businesses and newcomers.

Fadness said the portion of the property adjacent to 96th Street has attracted the most interest, so that is likely the first part that will see development.

Any development deal would have to be approved by the IAA before moving forward.

Eric Anderson, the airport authority’s property director, said it will likely be several years before the site is fully developed.

Also at Friday’s IAA board meeting, board member Mamon Powers III gave an update on the airport’s “concessions refresh” efforts.

Almost three-fourths of the airport’s shops and restaurants will see their leases expire by the end of 2018. This means there likely will be some tenant turnover. The airport is actively trying to attract more local vendors.

More than 150 businesses attended a daylong information session Nov. 8, Powers said, adding that “we had a lot of local and national firms represented.”

Powers said the airport expects to spend between $2 million and $3 million to prepare spaces for new tenants. The airport is responsible for providing a “white box” space to new vendors, and from there the vendor bears the cost of developing the site.

The airport should recoup its costs in a little more than two years, Powers said, because the changes should increase the amount that the airport earns from concessions. Vendors pay the airport either a fixed monthly lease amount or a percentage of sales, whichever is higher.