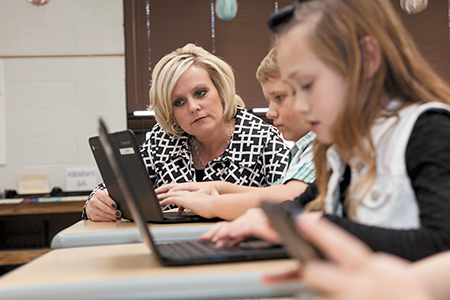 Indiana Superintendent of Public Instruction Jennifer McCormick laid out her wish list for the upcoming year on Tuesday, listing priorities ahead of the next General Assembly that will require the support of the governor and lawmakers.

While a few of McCormick’s 18 goals overlap with ones set by Gov. Eric Holcomb and other advocates, many of them focus on education policy issues that have received far less attention from the state as it gears up for the January legislative session.

The list, she said, portrays “a clear picture of who we are as a department.”

Her plans take up issues that have long been debated in the General Assembly, such as when children should begin school. They also address newer sources of frustration for schools, such as transitioning to yet another state test and trying to manage the effects of new federal rules that could cause graduation rates to plummet for many schools.

It’s not clear how much legislative or state board of education support exists for her plans. During her campaign, McCormick touted her ability to cooperate and work with other state officials, striking a stark contrast to her challenger, Glenda Ritz, who frequently clashed with the state’s Republican majority.

But while McCormick, also a Republican, has avoided some of the public flare-ups that vexed Ritz, her policies have often deviated from those of her party, particularly concerning state-funded vouchers for private school and charter schools. Those differences could affect her ability to have the legislature take up her agenda next year.

Details on potential costs and timelines for many of her goals were not provided.

Some priorities cannot move forward without the legislature’s support. For example, lowering the required school age to 5 would require legislation. Such a bill is regularly introduced in the Indiana General Assembly. While it has repeatedly stalled, McCormick said there is legislative support for it.

“We can still say—one of 26 states that can say—you don’t have to come to us until you’re 7,” she said. “That has created problems for some of our at-risk students … there is too much on the line academically.”

Lawmakers would also likely have to sign off on changes to Indiana’s diplomas, which are being scrutinized by a state committee that is considering overhauling graduation requirements to ensure students are prepared for life after high school.

McCormick has not supported the committee’s enthusiasm for multiple graduation pathways, telling the members that she believes having a single diploma could still meet the needs of students of different ability levels. She thinks a diploma is much better suited to addressing students’ postsecondary plans than the complicated “graduation pathways” proposal being considered.

“We love the idea of pathways, we embrace many of the ideas that are found within those plans, but we think a better vehicle for that would be diplomas,” McCormick said. “We think that is a natural pathway vs. what is coming out of the graduation pathways panel.”

McCormick acknowledged that the governor and the legislature are more focused on producing a better prepared workforce in Indiana. They also must address a recent school funding shortfall by adjusting the state budget.

“I think educators have become a little fatigued in the area of legislative mandates,” McCormick said. “We have plenty to do, but it is almost a relief to see a little bit of calm upstairs in the General Assembly.”