Home » Amazon’s incentives sure to be whopping 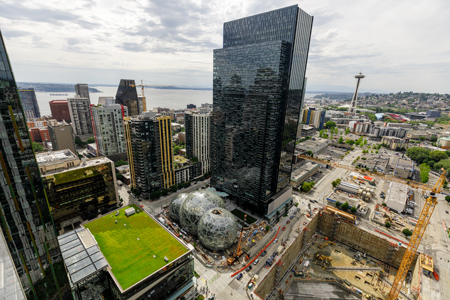 Any tax-incentive package to lure Amazon’s HQ2 to Indiana could easily top half-a-billion dollars and climb to more than $1 billion—even if officials offered the tech giant only the state’s standard economic assistance.

That would dwarf the state’s biggest-ever incentive deal: $30 million in tax credits and grants offered last year to India-based Infosys Ltd. for its plans to bring 2,000 high-paying jobs to Indianapolis.

State and local officials have remained mum about their bid to win HQ2, even since Amazon announced Indianapolis is one of 20 cities still in the running for the project. And officials have told IBJ that the region is focusing its bid on quality-of-life matters, rather than incentives.

But experts say the sheer size of the Amazon proposal—a $5 billion investment with 50,000 jobs paying an average of $100,000 a year—means even the most conservative of incentive packages would be enormous.

IBJ consulted state law, the Indiana Economic Development Corp.’s “transparency portal” and local economists to try to figure out—or at least estimate—how much in tax breaks Amazon could qualify for under existing programs.

The evaluation doesn’t include any bonus incentives the Legislature or Gov. Eric Holcomb could authorize or any infrastructure improvements state and local governments could fund to close the deal. Instead, it’s based on the types of incentives the state has approved for other companies over the past decade or so.

Still, IEDC spokeswoman Abby Gras cautioned IBJ against trying to calculate an incentive deal. She said “each project is unique” and that IEDC uses a “cost-benefit analysis to determine appropriate incentive offers based on a variety of factors, including investment, new payroll and above-average wage.”

With that in mind and help from experts, we tried anyway. The results? State law and existing programs could mean an incentive deal worth $537 million to $1.5 billion from the state alone, not including local property tax abatements.

According to IEDC, the EDGE credit is calculated as a percentage of the expected increased payroll tax withholdings generated from new-job creation. The credit can be up to 100 percent of those withholdings for up to 10 years. It’s awarded over time as employees are hired. For our estimates, we used a 3 percent tax.

That means if Amazon hired all 50,000, $100,000-per-year workers at once and kept them all for the term of the contract—which is nearly, if not completely, impossible—the maximum the state could offer the company would be $1.5 billion in tax credits over 10 years, $150 million each year.

What’s far more likely is a slow ramp-up of hiring. Let’s assume the company hires 5,000 employees a year at $100,000 each for 10 years. If it received a 100 percent tax credit, the savings would be worth a maximum total of $825 million. The first year’s credit would be $15 million, then would stair-step up to $150 million the final year of the contract.

Another way to predict what the state might offer Amazon is to study what it has offered other companies.

IEDC tracks the average incentive it’s awarded per job, a figure that captures both the EDGE credit and the smaller grant funds. In 2017, that average was $10,747; a year earlier, it was $9,072

Assuming Amazon nabbed the average incentive the state offered in 2017, it could receive a package worth $537.4 million.

It’s likely, though, the number would be higher. Gras said IEDC has “a strong focus” on luring high-wage jobs. She said the metric the agency uses to calculate a package is based on “incentives per new payroll dollar.”

In 2017, the state offered incentives worth 19 cents per new payroll dollar.

IBJ also calculated possible incentives using data from the 50 biggest deals the state has awarded since IEDC was founded in 2005.

So which method will be right? It’s too soon to tell.

“As you know,” Gras told IBJ, “all of the state’s negotiations are confidential.”

What we do know is that, even at the low end of the spectrum, a theoretical Amazon deal could be more than 20 times higher than anything the state has offered a company before.

“They’re going to get the best EDGE credit deal anybody has ever gotten and probably close to the best property tax option,” said Ball State University economist Michael Hicks.

So far, the state’s largest tax-credit deal was the one offered to Infosys, technically last year but inked this January. IEDC said the outsourcing tech firm could receive tax credits worth up to $30.5 million over 10 years if it hires the 2,000 employees it has pledged.

In 2008, the state offered tax credits of up to $23 million to Honda Motor Co. to build a plant in Greensburg and hire 2,064 people, the largest number ever promised in a single deal. Honda eventually claimed $21.3 million in credits.

All deals include assurances that the state isn’t on the hook for incentives unless the companies create jobs, officials said. “We also enter into contracts for each incentive agreement, allowing the IEDC to recapture incentives per the terms of the contract should that be necessary during that 10-[plus] year period,” Gras said.

As a result, Hicks said, EDGE credits seem to be a relatively good deal.

“The benefit of the EDGE credits are, they’re for people,” he said. “When you reduce the cost of buying something, hiring a person, you’re going to do more of it. It’s not a huge financial burden on any one place.”

But state income tax breaks aren’t the only incentive Amazon could receive. Local governments can offer property tax abatements for whatever site the company chooses.

Typically, an abatement can start at a 100 percent deduction and be gradually reduced over a decade, DeBoer said.

With a $5 billion capital investment taxed at 3 percent, a typical abatement could be worth as much as $150 million.

But that assumes Amazon’s entire investment would be taxable, and DeBoer said the company’s lawyers will likely fight for a much lower assessment.

Even after any property tax abatement expired, local government might not reap a huge reward from having Amazon within its borders. That’s because the state limits the amount of additional total tax revenue local governments can collect, even if property values in their borders shoot up.

Instead, DeBoer said, Amazon’s presence would likely shift the burden of taxation toward the company and away from existing taxpayers.

“If local governments are expecting a revenue windfall,” he said, “they’re probably going to be disappointed.”•