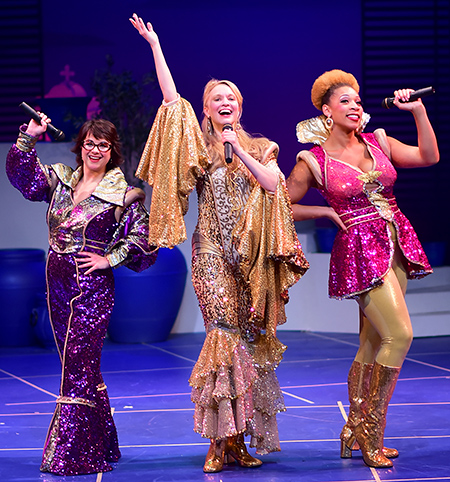 In a given theater season in central Indiana, you don’t have to wait long between productions of “Annie” or “Joseph and the Amazing Technicolor Dreamcoat.” Every decade or so, Broadway will offer up another revival of “Carousel” or “My Fair Lady” (both opening, again, in the spring).

But the musical-theater canon isn’t a solid thing. It’s always open to additions. In 2017, the most-often-performed musicals in high schools weren’t “West Side Story” or “The Music Man.” Instead, those staples were—at least temporarily—supplanted by “The Addams Family,” “Beauty and the Beast” and “Shrek.” Meanwhile, “Fun Home” was the top musical among professional theaters, according to the Theatre Communications Group.

When does the trendy transform into the canonical?

That’s what I’m wondering after watching both “Mamma Mia!” and “The 25th Annual Putnam County Spelling Bee”—each getting a solid revival here in Indy and each of which I was seeing for the fifth time.

The fact that “Mamma Mia!” is running at Beef & Boards Dinner Theatre through April 8 gives some idea of the faith the company has in this title. A sexual whodunit of sorts, it concerns Sophie, a young woman on the brink of marriage trying to figure out which of three possible suspects is her father. Her mother, Donna, isn’t aware of the scheme until the three clueless gents show up. It’s all an excuse—albeit a fairly charming one—to tie together tunes from the ABBA songbook. Sometimes those ties are very loose.

The show proves a good fit for Beef & Boards, with scene

changes smoothly covered by the band, the songs well sung, and a strong supporting cast. That talent includes Lanene Charters, a standout in a Rachel Dratch-esque turn as Donna’s pal Rosie, and B&B regular Jeff Stockberger and Don Farrell as two of the possible papas.

My wish for future theaters reviving “Mamma Mia!” (and many will) is that they consider going back to the roots for Donna. In every production I’ve seen except for the original, the part has been played by a traditionally gorgeous actress who doesn’t look at all natural wielding a power drill. Donna is a woman who managed to build a life—and a taverna—as a single mom. She’s also someone who can instill fear as well as love and respect in the people around her—yet only the U.S. original, Louise Pitre, seemed to ever have dirt under her fingernails or wear her iconic overalls for practical rather than fashion reasons. That’s no slight to Amy Bodnar, who handles the part fine here, but even in a non-realistic play, a hint of truth can be a big plus.

With a tunestack that is aging just fine, “Mamma Mia!” has a strong chance to be still on the boards a decade out. So does “The 25th Annual Spelling Bee,” assuming its creators continue to give license for theaters to tweak the references a bit.

One of the biggest laughs in Actors Theatre of Indiana’s production of the show (at the Studio Theatre at the Center for the Performing Arts through Feb. 18) comes from such a tweak. During the pledge of allegiance that kicks off the title competition, oh-so-politically-correct 12-year-old competitor Logainne Schwartzandgrubenierre (the last name a hybrid of those of her two dads), takes a knee while the other kids put their hands on their hearts. 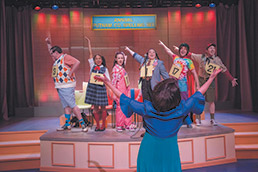 A small matter, perhaps, but that detail—and the priceless reactions of the other competitors and adult proctors—typifies the care that has gone into this production of the popular show. As the title suggests, it takes place during a middle-school spelling square-off. The six competitors—played by adults—are supplemented by audience members in the first act, which provides for some playful improvisation and some scripted moments pretending to be improvisation. But I’ve learned from past productions that this gimmick is a lot more fun when those culled from the crowd aren’t members of the local acting community, which two of the recruited spellers were when I attended on opening night.

As for the professionals, grown-ups Judy Fitzgerald and Doug Trapp (as the bee organizer and the school vice principal) resist the urge to overham their parts and, instead, let the colorful student characters take the spotlight. Brett Mutter is a wonderful William Barfee, whose “Magic Foot” number is a show highlight. And the rest of the cast rounds out just fine.

The show itself—with music by William Finn and book by Rachel Sheinkin—still fishes a bit in the second act, when it looks like ideas have run out and a bit of creative desperation has set in. But that’s largely saved here through sincerity, with Emily Crowley offering a heartbreaking read of “The I Love You Song” and Arianne Villareal delivering a spunky “I Speak Six Languages.”

The big win, though, is that, when the final words are being spelled, we actually care about who wins this thing and what will happen as a result. And that we laughed all the way to the end.•