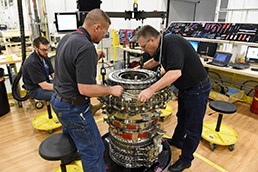 Employment at GE Aviation’s jet engine factory in Lafayette has swelled from 87 to 130 since last fall and is on track to reach 230 by 2019.

The facility opened in September 2015. It—along with factories in Durham, North Carolina, and France—produces the LEAP, a brand-new engine that GE says has the distinction of being the fastest-selling jet engine in commercial aviation history.

This year, production will approximately double, to more than 1,000 engines, and the rate is slated to grow to 2,000 engines a year by 2020.

“The LEAP engine ramp-up story is really quite exceptional,” Allen Paxson, GE Aviation’s CFM Program general manager, said in a statement. “The fleet is on track to reach the one-million flight-hour milestone after less than two years of service, which is unprecedented for a new engine.”•