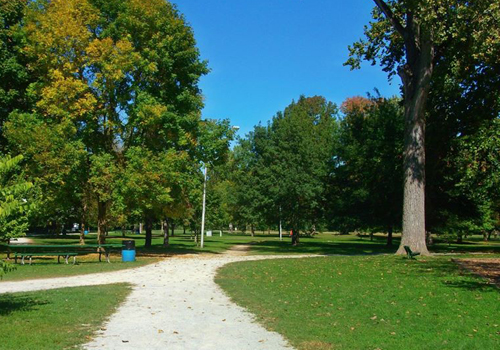 City park leaders are asking for the public’s input as they begin to explore potential improvements to one of Indianapolis’ most prized parks.

The 62-acre Broad Ripple Park along the banks of the White River attracts about 150,000 visitors annually and boasts a waterfront viewing platform, bark park, wooded preserve and fitness path. That’s in addition to typical park amenities such as a swimming pool, tennis courts, baseball diamond and playground.

But the park, which dates to the early 20th century, needs updating to keep pace with Broad Ripple’s rapid development. Just west of the park, for instance, Broad Ripple High School will close at the end of the school year, possibly opening the site up to residential or commercial usage.

“Broad Ripple Park has not had a good look in decades, and there’s a lot of change happening in Broad Ripple,” Indy Parks Director Linda Broadfoot said. “The time just seemed right to take a hard look at Broad Ripple to make sure we’re better serving our constituents.”

The master plan also might include opportunities to link the park to the village—something village leaders have been clamoring for in recent years.

“Trying to create a connection to the village and other trailways, like the Monon, is extremely important,” said Joshua John, president of the Broad Ripple Village Association.

The parks department is spending $286,446 to create a master plan to guide the park for the next 20 to 30 years. The department will host three more open houses (the first was held March 7)—from 6 to 8 p.m. on April 4, May 2 and May 23 at Broad Ripple High School—to gauge the public’s vision for the park.

“There’s an incredible amount of input that goes into these processes,” Broadfoot said. “We know folks are really passionate about their parks.”

After receiving input from the public, the team will begin drafting ideas with a goal of having a plan to present to the Indy Parks board and Indianapolis  Metropolitan Development Commission in late summer, with final approval by the City-County Council in the fall, she said.

Providing park visitors better access to the White River should be a big part of the plan, Broadfoot said. A footpath running along the river and a lone overlook are the only options for viewing. A single boat ramp provides the only direct access to the river.

“It’s no secret that we could use a shine on some things there,” Broadfoot said. “It would be nice to refresh some things, reconfigure some things.”

An online survey for providing suggestions is available at www.broadrippleparkmasterplan.com. The Broad Ripple Park Family Center also will feature a project studio for people to visit and learn more as the master plan develops.

The park has been a fixture in Broad Ripple for more than a century. It opened in 1906 as White City Amusement Park, in homage to Chicago’s 1893 world’s fair Columbian Exposition. The color of the material mostly used to cover building facades gave the Chicago fairgrounds its nickname, the White City.

Two years later, in 1908, fire destroyed most of the amusement park but left the pool unscathed, which in 1911 was incorporated into another amusement park. Amusement parks under various owners occupied the land until 1945, when it was purchased by the city. The city dismantled the rides, including the 1917 carousel, which now sits in the Children’s Museum of Indianapolis.