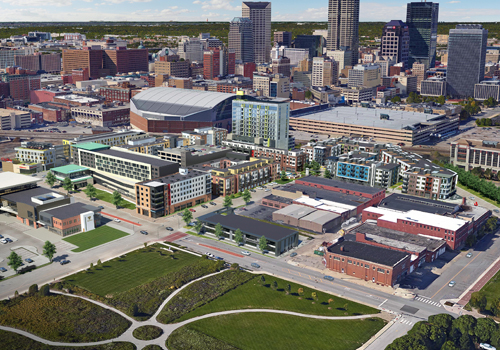 Buckingham Cos.' $135 million second phase of CityWay is beginning to take shape, with construction already under way on several big additions to the existing development.

The project will bring 400 additional apartment units, nearly 29,000 square feet of retail space and 19,000 square feet of office space to the southeast side of downtown when work concludes in the fall of 2019. (Click on image below for a larger view of the project site plan, with buildings in second phase outlined in gold.)

Indianapolis-based Buckingham is building the second phase with the help of $15 million in downtown tax-increment financing funds approved in October 2015 under the administration of then-Mayor Greg Ballard. 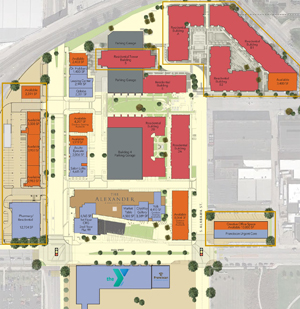 That’s far less than the $98 million in bonds the city issued in 2011 as a loan to Buckingham for the $155 million first phase, which included 250 apartment units, The Alexander boutique hotel, 40,000 square feet of retail space and the Irsay Family YMCA at CityWay.

Occupancy for the existing apartment units has consistently hovered around 95 percent since they were completed in January 2013, giving Buckingham extra incentive to embark on the next phase.

“Not only has CityWay spurred a large amount of downtown living, but we’ve also found a really strong interest from the health care industry,” said Jim Smith, Buckingham’s creative marketing director. “It’s kind of creating its own niche market.”

To that end, Franciscan Health has agreed to take the first floor, or 9,000 square feet, of the two-story, 19,000-square-foot office building that’s under construction at the northeast corner of Alabama and South streets.

Franciscan will operate an urgent care center in the building, in addition to the primary care, sports medicine and physical therapy services it offers at the nearby YMCA across South Street.

Buckingham still is searching for a tenant, or tenants, to take the 10,000 square feet available on the second floor above the Franciscan space.

That building is already under construction. In addition, six apartment buildings are planned for the second CityWay phase. Those include three being built along or near Virginia Avenue on the northeast side of the project. Adjacent to one of those buildings, 3,400 square feet of street level retail space will be available at the corner of Virginia and Louisiana streets.

For the fourth building, Buckingham is constructing a seven-story, 77-unit apartment tower on top of the six-story parking garage located on the east side of Delaware Street on the north end of CityWay.

To make way for the apartment buildings, a historic structure that sits on the property west of Delaware will need to be relocated. The small brick building lacks landmark status but was built in the late 1800s as a livery. Buckingham plans to move the building, which currently is used for storage, 300 feet to the north.

The company ultimately hopes to find a retail use for the historic structure.

Construction on the west side of Delaware is expected to ramp up quickly now that spring is here, said Smith, noting it should start “any day now.”

“It’s going to go full-speed ahead,” he said.