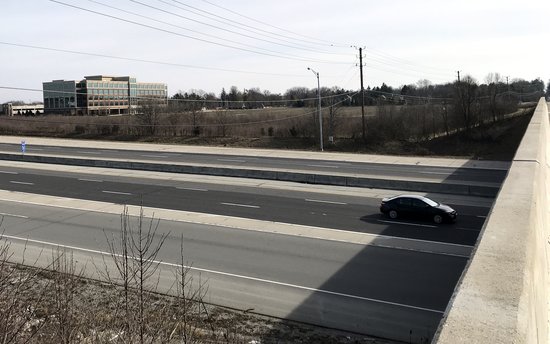 St. Vincent-Indiana CEO Jonathan Nalli confirmed Friday that the hospital system has options to buy property at 96th Street and Spring Mill Road in Carmel—but said he had no plans to build a $1 billion hospital complex at the site.

Nalli told IBJ that St. Vincent has not actually purchased the land and has no finalized plans for the intersection, which is near Interstate 465 and Meridian Street.

The comments are Nalli’s first since IBJ reported in February that Ambrose Property Group and Sexton Development LLC filed plans with the city of Carmel for a health complex at the site that would include nine buildings and four parking garages.

At the same time, Ambrose partnered with Bremner Real Estate to make lucrative offers to buy 13 homes in Lacoma Estates, a subdivision just west of the project location. A letter sent to Lacoma Estates residents described a $1 billion hospital complex.

Nalli said St. Vincent has no plans to abandon its primary hospital at 2001 W. 86th St. in Indianapolis, which is only about three miles west of the 96th Street location. And an email he sent Friday to St. Vincent employees said other previously announced investments—including the renovation of St. Vincent Women’s Hospital—will continue.

In an interview with IBJ, Nalli repeatedly said he did not have definite plans for the land. He gave the interview in the lobby of St. Vincent's newest neighborhood hospital at East 86th Street and Allisonville Road in the Castleton neighborhood. The tiny hospital, measuring about 16,000 square feet, or less than one-tenth the size of a traditional hospital, is more on the scale that St. Vincent sees as its future, Nalli said.

St. Vincent recently moved its corporate offices from Meridian and 103rd streets into the Parkwood West building, just east of the 30-acre site at Spring Mill and 96th.

"The idea is, we've enjoyed that [Parkwood West] building in the short time we've been there," Nalli said. "We feel that it's our best interest to control the property surrounding our building. So we feel that acquiring it allows us to figure out what, if anything, that could turn into."

He added: "We've made no decision, because our decision is now focused on, 'How do we successfully have that property rezoned in the Meridian Corridor rezoning?' At that point in time [after the rezoning], we would acquire it."

"We have no project slated other than we want to own the real estate next to our new corporate office," he said.

When asked why the rezoning petition contained plans and drawings for a large, inpatient hospital and medical offices with an estimated price tag of $1 billion, Nalli said: "We didn't submit the drawings for that, so I can't comment on that. And billion-dollar-projects are nowhere near our idea of, 'What does re-imagining health care look like?'"

Asked if St. Vincent might embark on a project at the site with another partner to split the cost, he flatly said "no." He declined several times to talk about possible uses of the land, assuming Carmel grants the rezoning request.

Nalli said St. Vincent continues to upgrade its 86th Street campus with the renovation of the St. Vincent Women's Hospital, St. Vincent Indianapolis operating rooms, an education and simulation center, a house for patient families and a planned expansion of the pediatric intensive care unit at Peyton Manning Children's Hospital, which will be officially announced April 9.