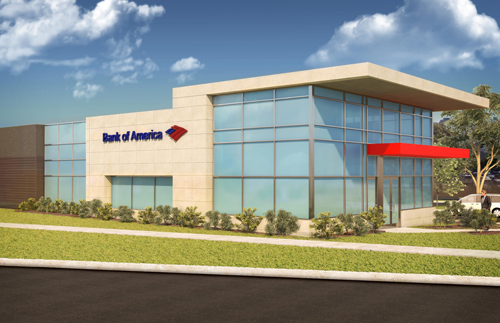 Bank of America is building its first stand-alone banking center in Indianapolis, located in the heart of the upscale Keystone at the Crossing retail submarket.

The Charlotte, North Carolina-based banking corporation is making a push into the metropolitan area and so far has opened four retail bank branches—all located in existing buildings.

Two are downtown, at the Cummins office building on East Market Street and at the 747 Apartments project at the southeast corner of Massachusetts and College avenues. It also has branches at 96th Street and Interstate 69 and at Campus Parkway and Brooks School Road in Noblesville.

Local developer PK Partners owns the land on which Bank of America is building the center. An affiliate of the company has signed a ground lease with Bank of America, which is constructing the 3,500-square-foot center.

“We are pleased that Bank of America will be joining the mix of sophisticated retail brands, restaurants, offices, hotels and luxury apartments that make Keystone at the Crossing the place to be,” said Wes Podell, senior vice president of PK Partners, in a media release.

“There’s a lot of activity there,” he said of the Keystone at the Crossing submarket, “and those are the types of places that you want to be in if you can.”

Crask declined to provide a cost estimate for the project but said the center will be like the one in the downtown Cummins building, which is staffed by employees. The other three area branches are not.

Those are known as “advanced centers” and enable customers to interact with remote employees via video conferencing, but they do not have local staffing.

Bank of America is not saying how many centers it hopes to have in the Indianapolis area, but the company continues to look for opportunities as part of a broader effort to add 500 of the staffed locations nationally over the next four years, Crask said.

As part of the Keystone project, Bank of America has agreed to install sidewalks to make the branch more pedestrian-friendly, as well as a crosswalk across River Road to make it easier for pedestrians to access Piada Italian Street Food.

The free-standing restaurant sits in the far southwest corner of the parking lot for PK Partners' The Shops at River Crossing.

PK Partners, in fact, has a big presence in the Keystone at the Crossing area.

PK Partners also recently completed the $100 million mixed-use River North at Keystone project, north of where the Bank of America branch is under construction.

Next up for PK Partners’ could be the redevelopment of the Champps site. The restaurant, located just south of the River North project, closed in November after a 22-year run. PK Partners is working on plans for the property, Podell said, and an announcement should be forthcoming.