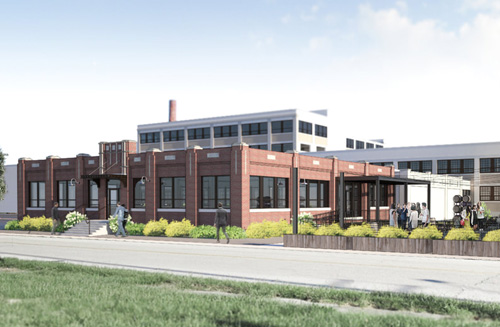 An Indianapolis-based developer is seeking city assistance to convert a ramshackle complex of buildings along the old Massachusetts Avenue industrial corridor into a $15 million mixed-use project with expansive work, fitness and gathering space.

Going by the name The Junction at North Mass, the project would total a whopping 140,000 square feet and include offices, a vast recreation center and lounge and restaurant space, among other features.

Stenz Construction Corp. in November 2016 bought the 1.2-acre parcel at 1411 Roosevelt Ave. for $700,000 from Marsh Transfer Inc., the parent of Certified Moving and Storage, according to Marion County assessor records.

The property on the city’s near-east side sits just north of the Circle City Industrial Complex and south of Interstate 70, and contains four buildings constructed in the 1920s. The buildings were the original home of the U.S. Corrugated-Fibre Box Co., the predecessor to LDI Ltd., led by local businessman and philanthropist Andre Lacy until his death in November 2017.

Stenz is planning a 50,000-square-foot recreation center in the building on the northeast end of the property that would include fitness and community gathering space with climbing walls, a large social lounge and restaurant, work stations, a multi-use room for events, and a yoga and fitness studio.

The recreation center would have a separate owner and operator, said Beau Ansty, president of Stenz.

In addition, the four-story building to the west and two smaller buildings to the north—totaling about 90,000 square feet—are expected to be renovated for use as leased office space.

“We saw this as an opportunity to anchor the North Mass corridor,” Ansty said. “Its proximity to Bottleworks and Windsor Park, and it’s even close to 16th and the Monon, that’s what attracted us to it.”

Bottleworks is the $260 million redevelopment Wisconsin-based Hendricks Commercial Properties is undertaking at the former Coca-Cola bottling plant property at College and Massachusetts avenues.

In the adjacent Windsor Park neighborhood, father-and-son team Tom and Ed Battista along with business partner Sam Sutphin have purchased the Christian Unity Missionary Baptist Church at 1258 Windsor St., with plans to open a three-screen independent cinema and eatery.

And a mix of restaurants and apartments are leading to a resurgence of East 16th Street to the north of where Stenz is planning its project.

Stenz, under the affiliate Roosevelt IN LLC, is asking the city for a five-year real property tax abatement to help offset costs related to the $15 million development.

The city’s Metropolitan Development Commission is set to consider the request on Wednesday.

Department of Metropolitan Development staff is recommending approval of the abatement, which would save Stenz over the five-year period a total of $664,611.75 in property taxes. During the same time, the company is expected to pay $30,459 in taxes and would pay $221.537.25 annually after the abatement ends.

DMD estimates that the improvements to the buildings will result in an increase to the Marion County tax base of nearly $8.1 million.

According to the city staff report on the request, the project would create 274 jobs with an average wage of $32.20 per hour. Ansty told IBJ that the jobs number was a projection based on the square footage and anticipated users of the different spaces of the complex. "We expect there to be a good mix of professional and service-oriented jobs, both full- and part-time," he said.

If city development officials do not approve the tax abatement, Stenz likely would not move forward with the project, Ansty said.

"It’s an important piece of the overall feasibility of the project," he said.

Stenz is well-familiar with the near-east-side area. In the Cottage Home neighborhood to the south, the developer built 25 homes as part of its Dorman Sq. project on Dorman and Stillwell streets, south of East 10th Street. It’s now broken ground on the final piece of the project, a 6,000-square-foot retail and office building at the corner of 10th and Dorman.