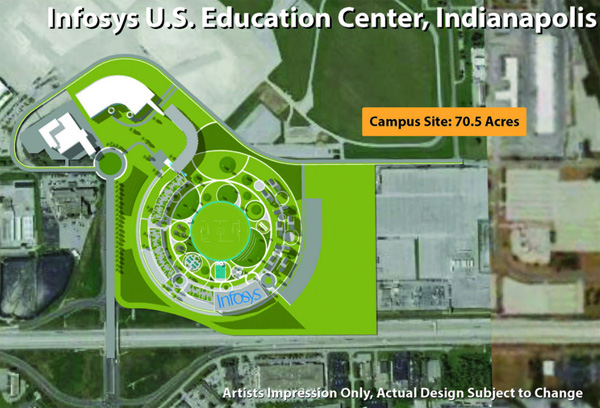 Infosys Ltd. plans to spend $35 million in the near term to transform a 70-acre parcel on Indianapolis International Airport property into an educational campus that officials say will be “transformative” for the west side of Indianapolis.

What Infosys ultimately has planned for the area is expected to be much, much bigger.

Infosys President Ravi Kumar said Thursday afternoon that the initial construction will be a 125,000-square-foot education center and 250-person residential facility on the site near the old Indianapolis airport terminal at the intersection of Sam Jones Expressway and South High School Road. The company will have the option to double its footprint in the future.

The ultimate project, to be developed in phases over the next several years, is expected to be a $245 million, 141-acre campus with 786,000 square feet of facilities.

“We will build the skills of the digital future with a relentless focus on education and learning,” Kumar said, surrounded by workers the company has already hired in Indiana. “There’s no better place than Indiana to train future workers.”

The state of Indiana and city of Indianapolis have put together an economic incentive package for Infosys worth more than $100 million.

Infosys first announced in May 2017 that it planned to open a tech and innovation hub in Indianapolis that could lead to the hiring of 2,000 high-skill employees by the end of 2021. Thursday’s announcement added 1,000 more jobs to the total.

“This deal with Infosys—their commitment—is the single largest job commitment deal” in the history of the Indiana Economic Development Corp., Gov. Eric Holcomb said during an event at Infosys offices in OneAmerica Tower downtown.

Infosys initially established its local base of operations at OneAmerica Tower at what it calls its Technology and Innovation Hub.

The Indianapolis project is one of four centers the company said it would open in the United States that would employ a total of 10,000 workers. Others are slated for Rhode Island, North Carolina and Connecticut.

Kumar said the company already has hired 4,000 of the workers it promised nationwide.

But Kumar also said Holcomb and state economic development officials were determined that the company’s U.S. educational hub would be in Indianapolis. The Holcomb administration “not only gave the confidence but the support to think big for Infosys and the state of Indiana,” Kumar said.

Mayor Joe Hogsett worked with the state and Infosys officials to put the education campus at the airport, in the area where its terminal was located before a new one opened midfield in 2008. Hogsett on Thursday lauded the cooperation on the project among state and local leaders.

“Indiana is a state that works when we work together,” Hogsett said.

The airport’s executive director, Mario Rodriguez, said the Infosys education center is the “best use for this land.” Airport officials had been searching for some time for a premier project for the former terminal site, parking lots and nearby property.

“It is truly transformative and will create the renaissance for Indy’s west side,” Rodriguez said.

The Techology and Innovation Hub will continue to operate in the OneAmerica Tower for the foreseeable future, according to IEDC spokeswoman Abby Gras. The 3,000 promised jobs will be spread between the downtown and airport-area facilities. 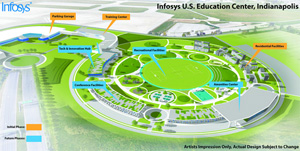 Infosys plans to break ground on the first phase of the U.S. Education Center before the end of the year. It expects to finish that phase by the end of 2020. (Click image at right for larger image of concept rendering.)

The company plans to establish training programs for new employees as well as for students from partnering colleges and universities, focusing on technology and computer science skills. Infosys also will offer training for clients who want to improve the skills of their employees.

Occupancy at the 250-person residence facility will turn over many times per year as trainees complete multi-week training programs.

The city of Indianapolis has agreed to rehabilitate and transfer ownership of an existing 2,000-space parking garage on the site that served the former terminal. Additionally, the city has agreed to contribute real estate and infrastructure improvements over the course of the phased project worth $17.8 million–$9.8 million for the property and $8 million for the infrastructure work.

“Infosys said yes to America and today they’re saying yes to the state of Indiana once again,” Pence said.