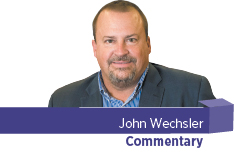 In March, we celebrated the grand opening of the Indiana IoT Lab. About 1,000 guests helped us kick off a new era for innovation in Indiana, signaling an important shift for Indiana’s economy. Even though the paint on the walls is barely dry and the member and sponsor logos are freshly hung, our focus has now shifted to the operational excellence required to cultivate a world-class innovation environment with the internet of things at its core.

As Fishers Mayor Scott Fadness put it, IoT is an opportunity Indiana can’t afford to waste. Our state’s key industries—manufacturing, agriculture and logistics—face imminent disruption from internet-connected devices, referred to collectively as the internet of things.

Thus, we find ourselves with two choices: Ignore these changes at our peril or embrace change to maintain a leadership position in these important industries—and maybe even invent some new ones along the way. Rather than leaving the fate of Indiana’s core industries to far-removed developers on the coasts, we decided to lay a foundation for grass-roots IoT innovation within state lines. The Indiana IoT Lab in Fishers is the result.

Make no mistake, the lab is a big win for the city of Fishers. But why is the Indiana IoT Lab important to the rest of the state? To answer this question, we must first examine who Indiana IoT is, apart from a building on Technology Drive.

We are made up of stakeholders from throughout the state.

It’s in the name and also the goal: The Indiana IoT Lab Network is a statewide project, involving leaders from all over the state with the goal of building IoT capabilities into our traditional strengths in industry. To accomplish any kind of meaningful change, a diverse collection of brains with different backgrounds is a requirement.

I’m grateful for leaders at organizations from across Indiana who are championing the cause. Indiana University is a founding partner of the lab and represents the next generation of Indiana’s business leaders and engineers, those steeped in intelligent systems engineering, cyber-physical systems, and human-computer interaction. Comcast, a founding sponsor, is exploring options to support smart-city infrastructure in Indiana and partnering with us to launch a next-generation LoRaWAN network (which wirelessly connects battery-operated devices to the internet) to power IoT innovation.

Allegion, a security-products company based in Carmel and also a founding sponsor, recently announced the creation of a $50 million venture capital fund for early-stage companies focused on innovation in the security field. Mayor Scott Fadness and the city of Fishers made the Indiana IoT Lab the first city-funded IoT lab in the nation. The lab is no one person, but rather a collection of forward-thinking organizations from across the state.

We are a template for statewide collaboration on IoT innovation.

Even though the Indiana IoT Lab is open and thriving, the quest is far from over. Our goal is a statewide network of IoT centers of excellence, similar to the Indiana Coworking Passport.

From Launch Fishers’ humble beginnings in the basement of the Fishers Library, we grew to 50 cooperating locations offering reciprocal rights to our collective 3,000 members, enabling members of one location to work at another location throughout the state. This removes barriers to our entrepreneurs doing business within the state and improves collaboration as we connect more of our entrepreneurs statewide. We see the same potential in IoT, with fewer locations but similar impact.

Each Indiana community has something different to offer, for both coworking and IoT. In Fishers and metro Indy, we have access to a number of experts in the software and security fields. Elkhart counts nearly half of its jobs as manufacturing, earning the region a recent WSJ story with the headline: “The Future of America’s Economy Looks a Lot Like Elkhart, Indiana.” Lafayette’s access to the Purdue Agricultural Program provides it a distinct skill set, and southwestern Indiana’s plastics capabilities are well-known to the world.

Let’s capitalize on the rich history of industry expertise and leadership throughout our state by introducing world-class IoT skills, something Steve Case has written about in his book “The Third Wave.” It’s only through a network of leaders in these communities across our state that we can change entire industries and ultimately change the world!

We are an example of what Indiana can be when smart people with good attitudes come together with a common vision.

Top colleges and universities throughout Indiana have produced notable graduates, including Todd Wagner, Mark Cuban, Scott Dorsey and Neil Armstrong. Include tech pioneer Scott Jones and Apple’s head of retail, Angela Ahrendts, and it’s clear Hoosiers not only have the know-how to exceed in their fields, but also the courage to roll up their sleeves and get the work done.

Can you imagine what a team made up of the best Hoosier minds could do together? This is the type of opportunity we have in front of us, and our fortunes for generations will be dictated by how well we collaborate today.

Wechsler is founder of the Indiana IoT Lab.