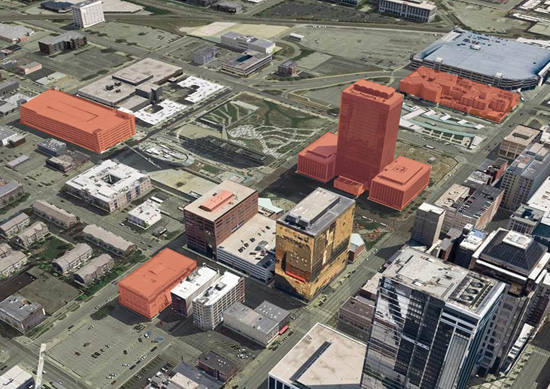 The city of Indianapolis is moving forward with plans to review its needs for downtown real estate—including use of the hulking, 734,447-square-foot City-County Building—and is preparing to pay five firms a total of nearly $1.5 million to handle the process.

Mayor Joe Hogsett in late April discussed the initiative to rethink the city’s space needs, known as Indy 3.0, at his State of the City address. Properties under the microscope include the City-County Building, Old City Hall, the Marion County Jail and the 500-space East Market Street parking garage—all of which the city owns.

At the time, Hogsett said that all options were on the table, including putting some properties on the market for private redevelopment.

Hundreds of government workers will begin leaving the 28-story City-County Building at 200 E. Washington St. once the city’s $572 million criminal justice center is finished in late 2021. Construction on the campus is set to begin this summer on the former Citizens Energy coke plant site on the southeast side.

As part of Indy 3.0, the city’s Metropolitan Development Commission on Wednesday is set to vote on resolutions to award the five contracts.

The amounts and firms are:

— $190,000 to Pivot Marketing to provide branding, communication and other marketing-type services.

— $97,500 to American StructurePoint Inc. to conduct a physical asset analysis of the space.

— $49,000 to Core Planning Strategies Inc. to perform an analysis of the current and future space needs of the city.

The city will use money available from its Consolidated Redevelopment Allocation Fund to pay the firms for their work. Their report should be ready early next year, said Jeff Bennett, the city’s deputy mayor of community development.

“We’re at a unique moment in city history and city government, with the work on the community justice campus, and just the general change in the way people interact with city government,” he said. “It gives us an opportunity to take a comprehensive look at what the future of city government might look like. Some of it is real-estate related and looking at the physical places were city government is operating today.”

City officials estimate that at least half of the 734,447-square-foot City-County Building will be vacant, leading them to assess the future of the structure and whether it might be attractive to private developers.

One option the city is considering is moving remaining employees at the City-County Building, once the justice center is built, to Old City Hall at 202 N. Alabama St.

City officials last year issued a “request for information” to relaunch the process of redeveloping the 107-year-old limestone building at the northwest corner of Ohio and Alabama streets, after the 21c hotel project fell apart.

The city in August received 11 responses, one of which recommended converting Old City Hall into a “new city hall.” The future of the building, however, remains up in the air.

The long-term redevelopment plan also will explore how to incorporate the city-owned Marion County Jail at 40 S. Alabama St. and the East Market parking garage (on the northeast corner of Market and New Jersey streets) into the mix.

At the City-County Building, it’s also possible that either the smaller east or west wings, or both, could house city government, and the tower alone be redeveloped.

The property sits within the new Market East tax-increment-financing district established by the City-County Council in November 2016.

The City-County Building was completed in 1962 at a cost of $22 million. It is no longer efficient in serving the public in a digital age, according to city officials.