But drowned out by reports of potential jobs and the millions of
dollars in federal funding the two have landed are other companies toiling in the emerging hybrid automotive
market, albeit as quietly as the electric motors on a Toyota Prius.

In fact, meld Bright and EnerDel’s
lineup with components made by other firms, such as Remy International, Indy Power Systems and Light Engineering, and you’d
practically have all the key components for a plug-in vehicle.

Pulling out a stack of company brochures from his visits around the state,
Paul Mitchell rattles off names of motor makers and electronics firms capable of entering the automotive or wind-energy sector.

“The potential here is even broader than the three or four smaller firms that often get mentioned in central
Indiana who have been out there professing their desire to be in this industry,” said Mitchell, president and CEO of
Energy Systems Network, an initiative formed early this year to grow the state’s energy technology industry.

Few realize, for example, that North America’s largest producer
of electric motors for hybrid vehicles is based northeast of Indianapolis, in Pendleton.

IBJ.COM EXTRA
View a list
of companies and their hybrid products.

Remy International was
one of those former General Motors units that shuttered its local
alternator and starter manufacturing.

What’s not widely known is that Remy in recent years has been designing
and producing electric motors for GM’s hybrid SUVs, such as the GMC Denali and Cadillac Escalade.

Hybrid vehicle sales in the United States could hit 1.5 million in 2012, according
to The Green Car Report issued by Santa Monica, Calif.-based MDB Capital Group. With average sales prices
of about $30,000, that could amount to $52.5 billion in sales. For hybrid components manufacturers, that
would represent sales of $25 billion, the MDB report said.

“We think that in five
years this [sector] could be one-third of our sales,” said Remy CEO John Weber.

With such
potential in mind, Remy has worked to create a standard line of motors that essentially can be plucked off the shelf for automakers.
By avoiding non-recurring tooling and development, Remy hopes to keep prices competitive.

It has already produced
more than 50,000 motors for hybrids. Next, it will supply hybrid motors for German automaker Daimler AG. A deal with another
automaker is to be completed later this year.

“We have not spent a lot of time banging pots, saying, ‘Look at us, look at us,”
Weber said.

Neither has Light Engineering. 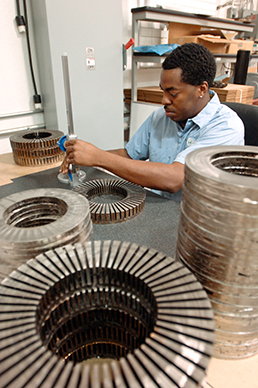 The electric motor company was started in 1998
in San Jose by a handful of University of California-Berkley students who built motors for GM’s
Sunrayce electric car competition.

Nearly a decade ago, straining under the high cost of
doing business in California amid the dot-com boom, Light moved operations to the relatively cheap confines
of Park 100 in Indianapolis.

Still funded primarily by California venture capital, including that of Silicon
Valley real estate tycoon Carl Berg, Light has been creeping into the hybrid market while primarily making electric motors
for industrial uses, including power generators it supplies to Marathon Electric for fire-rescue trucks.

Light
CEO Matthew Johnston, a Chicagoan, about a year ago struck a deal with Chinese Automaker JAC Motors to make Light the exclusive
supplier of motors for its new delivery truck. Johnston’s team spent last April at the Shanghai Auto Show, where JAC
had a hybrid truck ready to drive.

A month later, Johnston’s team was in Stavanger, Norway, trying to
drum up business for a Light motor unit at the International Electric Vehicle Symposium and Exhibition.

“Everybody
is trying to put their stake in the ground,” Johnston said.

Indy
Power Systems has more stakes in the ground than a Boy Scout campout.

It’s indicative of the still-emerging
hybrid power technology, which the company’s CEO, Steve Tolen, embraced in 2007. By then, he thought the technology
and market were ripe for an electric car, and he formed Symphony Motors.

To keep costs down, he wanted the car
to be able to use different types of batteries, given that technologies continue to evolve. But nobody made a power control
system that could handle different battery chemistries and their wildly different characteristics.

With the help
of former GM engineers, Tolen’s firm developed a power control system, known as the “Multi-Flex,” they were
happy with. But he and investors saw more potential money in the device itself than in making cars.

“We
manage electrons,” Tolen said. “We found it doesn’t matter where they come from.”

Newer
battery technologies, such as lithium-ion, are preferred for hybrids because of their higher power and lower weight. Yet they’re
markedly more expensive than conventional lead-acid batteries or even the nickel metal hydride batteries used in most existing
hybrid cars.

Indy Power is also in talks with customers for other potential applications, such as putting
its technology inside a cell phone affixed with a photovoltaic strip to allow charging by the sun.

Tolen’s
team is also validating their electronic brain’s ability to manage and blend bigger power, allowing an industrial building,
for example, to balance multiple energy inputs—from the grid, from a wind turbine and from solar power.

To that end, in a shack lined with concrete sheets in case things go “boom,” engineers are testing the Multi-Flex’s
ability to manage a whopping 300 amps of power—enough to cook King Kong to the size of a hot dog.

And on
Sept. 3, Tolen announced that Indy Power, the Crane Naval Surface Warfare Center and Pike Central High School in Pike County
will team to equip a Humvee with an electric hybrid drive system.

So far, the six-person
firm has yet to sign up a commercial customer, “but we’re reaching a critical mass,”
Tolen said.

Battery maker EnerDel, which has its second
plant just a 3-wood shot east of Indy Power’s Noblesville office, is already up and running.

It has a letter of intent with California-based Fisker Automotive, which hopes to start manufacturing
its sports car hybrid by mid-2010. EnerDel already supplies batteries to Norwegian hybrid maker Think.

EnerDel
also has development agreements with Volvo and Nissan that it hopes will lead to big orders some day. It already provides
batteries for the Japanese postal system, for a fleet of electric delivery vehicles, “which I think proves we do have
some technology that’s very interesting,” said Ulrik Grape, EnerDel’s CEO.

Interesting, indeed,
given the lead Japanese companies such as Panasonic and NEC have in supplying batteries for the most popular hybrids. Ford
Motor Co. even uses a Japanese battery supplier for its hybrids.

So far, EnerDel is the only hybrid battery company
in the United States actually in production.

“We have a lead as we see it here in the United States,”
Grape said.

Already, EnerDel envisions a third plant in central Indiana that could employ hundreds. It has applied
for more than $450 million in federal funding toward expansion.

As for other
companies in Indiana that could move into the hybrid sector, time will tell, said Mitchell, of the Energy Systems Network.

“The challenge for these companies is deciding when to move into the market. I’m not sure that even
I would advise them now is the right time for them to do it. It’s certainly the right time to start thinking about it
and perhaps planning for it.”

Mitchell, whose group announced in April the “Hoosier Heavy Hybrid,”
a partnership to develop a hybrid truck, noted that there’s still uncertainty about the extent to which automakers will
embrace hybrids.

With all the uncertainty, motor maker Light Engineering isn’t ready to put all its eggs
into the much-ballyhooed hybrid basket. Having lived through the dot-com bubble, Johnston said he’s well aware a similar
scenario could play out in the hybrid realm.

In addition to producing motors for hybrid vehicles, Johnston’s
Light Engineering sees huge potential in selling efficient electric motors to the broader industrial market. He notes that
about 60 percent to 70 percent of the world’s generated electricity turns motors running everything from water pumps
to heating and cooling systems. Energy efficiency is expected to be a huge market, especially with the cap-and-trade plan
being contemplated by Congress that could send power prices soaring.

“We really work to not get too pigeonholed”
into a market, he added.

Energy-efficiency application “maybe gets drowned out a bit with all the hype
over electric vehicles,” he said.•