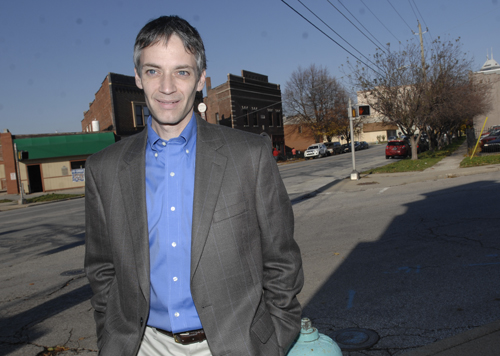 Embattled Indianapolis City-County Councilor Jeff Miller resigned from the council on Wednesday and pleaded guilty to four counts of battery.

The two events bring to a close nine months of uncertainty for Miller, who was accused last year of inappropriately touching two 10-year-old girls and was charged with child molesting.

“It has been a great privilege to serve my community, neighbors and all the residents of Council District 16. I have truly enjoyed working with you; my fellow councilors and the fantastic staff of the council office,” Miller wrote in the letter.

The case was transferred to a special prosecutor at Miller's request. In the plea agreement signed Wednesday, Hamilton County Prosecutor D. Lee Buckingham agreed to dismiss the three counts of child molesting if Miller pleaded guilty to the four battery counts.

Miller was sentenced on Wednesday to four years of probation. He also agreed to obtain a psychological evaluation and receive counseling.

"I feel this plea, offered by the special prosecutor, is fair and just," Miller said in a media statement. "My actions, while unintentional, were unwelcomed. I am terribly sorry for the impact this has had directly on those involved and indirectly on the community as a whole."

Marion County GOP Chairman Jim Merritt, who had previously called for Miller’s resignation, told IBJ that he was “glad justice has been done.”

“I’m glad this situation is over and we move on,” said Merritt. “Anytime a child is harmed, it really, really affects me.

Council President Vop Osili told IBJ he believes Miller, in deciding to resign, made what he felt was “the best decision for his family, which I respect.”

The plea deal and resignation wrap up nine months of political turmoil surrounding the case.

Miller was charged in November with the three felony counts of child molesting after two 10-year-old girls told police he inappropriately touched and massaged them at his house.

The charges say Miller performed or submitted to fondling with two children between Sept. 1 and Oct. 20. The charges were Level 4 felonies.

Another child told police that Miller had “a bin of massage stuff” at his house, and described the contents, saying one looked like a little car, one was "spikey," and another looked like a fidget spinner.

Police executed a search warrant at Miller’s home on Oct. 21.

In interview with police Oct. 21, Miller said he had known one of the girls since she was in kindergarten and the other for about a year, and considers their parents his friends.

When police asked Miller what kind of activities the kids do when they come over to his house, he said they sometimes played hide-and-seek and computer games. He said they also play a game called "Ride the Wild Jeff-beast” in which he gives them piggy-back rides and they use back massagers.

When police asked Miller if he massaged the children on the top of their clothes or underneath, he said: “I … thought on top. Now you’re making me try to remember. I’d … I .. think she would say something if I was not on the top of the clothes … maybe on back. I guess possible.”

According to investigators, the activity came to light when the father of one of the girls was watching the news and saw a story about sexual misconduct allegations against Hollywood producer Harvey Weinstein. The father told his daughter if she ever needed to talk about such things, he would listen.

About an hour later, the girl told him Miller had been giving her massages, the affidavit said. When asked for details, she said Miller had touched her bra strap, massaged her foot and moved his hand up to her thigh, and “swiped” her groin area.

Miller is single. His wife of 11 years, Carolyn, died in 2011 from acute leukemia.

Miller has been a member of the City-County Council since 2011. He is known for bipartisanship and frequently votes with his Democratic colleagues. Miller, who was re-elected in 2015, represents a district that covers parts of downtown and Fountain Square and extends to near the University of Indianapolis.

In December, Republicans on the council expelled Miller from their caucus and called for him to resign. However, Miller was adamant about remaining on the council, and continued to attend meetings.

Merritt said Wednesday that he would start the process of replacing Miller. As the chairman of the county party, he will call a caucus within 30 days, and the precinct committeemen for the council district will choose Miller’s replacement. That person will serve for the rest of Miller’s term. The next council election is in 2019.

Minority leader Mike McQuillen told IBJ that he was “anxiously watching that process” to see which names crop up.

Shortly after Miller’s resignation, one candidate reiterated her intention to run for the seat. Kristin Jones, who filed on Aug. 8, said in a statement that the news “brings to close this troubling saga, and I hope this will allow attention to return to what this City-County Council seat should represent: a tireless advocate for the residents and neighborhoods of District 16.”

McQuillen also said “the council has always survived as an institution” and would following Miller’s resignation.