Home » Whether for team building or birthday partying, getting out of a locked room is all the rage 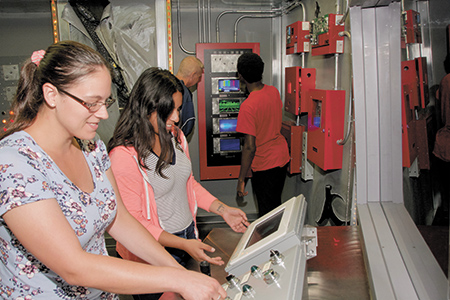 You’ve got exactly one hour before the bomb explodes/the boat sinks/the guards realize you are escaping from prison. Can you and your co-workers, pals and/or family members get out in time?

The concept of escape rooms—which appeared in Indianapolis in 2015 and have expanded exponentially—is simple: Charge people to figure a way out of a tight, cinematic situation. Blocking the exit are codes, puzzles and other obstacles that rely on innovative thinking, intuition, logic and counterintuitive reasoning rather than brute force to get past. 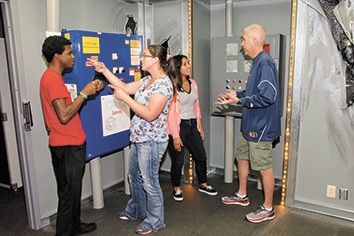 From left, Krystoffer Warfield, Yenifer Gomez Olguin, Kimberly Moore and Cory Blackwell work together to solve a puzzle that will allow them to "escape."

The pioneer here—by a hair—was the locally owned The Escape Room Indianapolis, which opened downtown above the Old Spaghetti Factory just a few days before a franchise of the Lexington-based Breakout Games set up shop in Castleton.

Now, with two locations in central Indiana and one in Columbus, the downtown Escape Room started with five rooms but has expanded to seven, including an Indiana University-themed room that opens Sept. 28.

“It replaces our Hoosier Hysteria rooms,” said co-owner Marjorie Neal. “IU contacted us to do a collaboration to celebrate the 200 years of IU history and we’ve been working on it for a year.”

Localizing is one way Neal has differentiated her company in an increasingly crowded market. Another is by thinking about the time before and after the escape attempt. 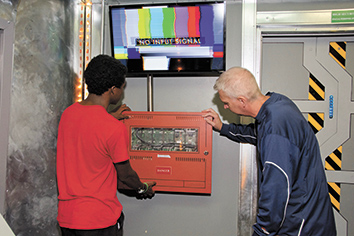 “We decided to have large lounges with local craft beer and wine. Corporations can block out the whole place and do team building for 100 people.” At the Fishers location, two identical escape rooms were created so teams could compete against each other for the fastest time—with opportunities to taunt each other mid-play.

Escape Room Indianapolis picked a location accessible to conventioneers and tourists, while others have set up shop in high-traffic areas such as Mass Ave. But a prestige location isn’t always important. Breakout Games found its first local spot in a GPS-challenging industrial park.

“It differs from market to market,” observed Colin Perrier, marketing associate for Breakout Games, now with 45 locations. “In Greenville, South Carolina, we’re in the heart of downtown. In Boston, we’re in the suburbs. Essentially, the floor plan we look for is office-type settings so we can refurbish old office spaces.”

New adventures are tested at the home business in Kentucky before being built in other cities, with new concepts explored all the time. The Lexington Breakout Games is experimenting with a virtual-reality escape room that up to four people can play at a time.

A business that has to keep its content secret poses unique challenges.

“If you were to show the entirety of it online or in an ad, it would spoil everything,” Perrier said. So what does he use to entice new players?

“What we love most is the hero moment,” he said. “That’s when a group has put in the final code and the door unlocks and bright lights come on—sometimes with just 10 seconds to spare. There’s this moment of elation from the group that’s great to capture on camera. We think that’s why you go. To experience that.”•