Home » Purdue plans $1.2B innovation district that could change ‘trajectory of the region’ 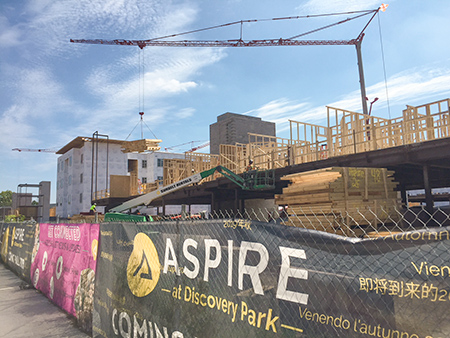 West Lafayette is a little town with some huge aspirations—ambitions it hopes to realize in partnership with Purdue University, which is planning a $1.2 billion development on the west side of campus that could change the entire community.

“If we wanted to continue celebrating new McDonald’s and cutting ribbons on 150 feet of paved road, we could have done that,” said West Lafayette Mayor John Dennis. “But if we wanted to actually have significance—not just in our area, but in the state and even country—we needed to figure out a way to have a viable partner.”

The city is far too busy these days to even note the opening of a random fast food joint. It’s instead focused on finishing a $120 million revamp of one of its main downtown arteries, the cost of which was split down the middle with Purdue.

And Purdue is embarking on a project called the Discovery Park District, a 400-plus-acre, $1.2 billion development on the western edge of its campus. When completed sometime in the late 2030s, it will host not just research and high-tech manufacturing facilities, but also retail, a convention center, walking trails and housing options ranging from student apartments to single-family homes.

The idea is to create an entrepreneurial ecosystem, filled with the kinds of services and amenities that would make it easy for Purdue graduates and faculty to pursue their careers or start businesses in West Lafayette, rather than heading for, say, Boston or Silicon Valley.

“The star scientists, the Nobel Prize winners, the innovative researchers are already at Purdue,” said Michael Hicks, economics professor at Ball State University. “What Purdue has long lacked is the supporting structure. By bringing in those support activities, you’re creating the infrastructure that allows people to stay here.

“If you could change it so that super-brilliant scientists elect to stay in West Lafayette, it entirely changes the trajectory of the region.”

The scheme is as audacious as it is unprecedented. Dennis credits that to the fact that the university and town are able to work almost in lockstep to get things done. It’s a comparatively new development, and an extreme rarity in the world of town/gown relations.

“It takes a smart, proactive government, but the missing key is often the university,” Hicks said. “West Lafayette has both of those.”

The first move was made in 2014, when the city took the radical step of annexing the Purdue campus—and Purdue took the just-as-radical step of acquiescing. That’s likely because, as part of the annexation plan, the university was given a strong say in land use and zoning issues around the campus perimeter.

“It was kind of a big deal,” Dennis recalled. “It had never been done before. Usually what happens between universities and communities is that they don’t get along. And when you talk about annexation, the only way to get it done is through a hostile takeover.”

In this case, it was anything but—thanks in part to the amicable relationship between Dennis and Purdue President Mitch Daniels, who had known each other years before the former governor came to Purdue.

“Mitch and I decided it would be beneficial both financially and structurally to have one geographic footprint,” Dennis said. “He’s a pretty pragmatic guy, so he worked on his team and I worked on mine, and we got it to happen.” 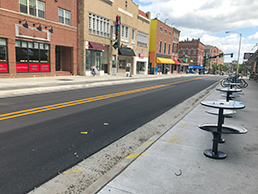 The project that got the synergy rolling was the $120 million redo of 1-1/2 miles of State Street, a major east/west artery bisecting both West Lafayette and Purdue. The ambitious plan, to be completed this winter, turned what was formerly a nondescript, traffic-choked asphalt ribbon into a pedestrian- and business-friendly corridor. Purdue is supposed to recoup much of its investment over the next two decades via revenue generated by a downtown West Lafayette tax-increment-financing district.

But even before work began in earnest on State Street, a bigger project that dovetailed off the roadwork was floated. A bare-bones version of the Discovery Park District, then called the Purdue Innovation District, was first made public back in the winter of 2016. 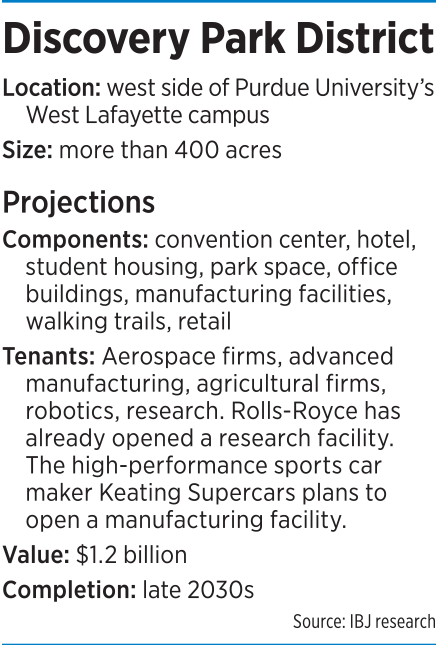 Located mostly on the south side of State Street, it extends past U.S. 231 and all the way to Purdue University Airport. The area closest to the airport’s 7,000-foot runway is set aside as an “aerospace district.”

The land for the project was taken from the holdings of the Purdue Research Foundation, a private entity that oversees much of the university’s real estate. The foundation will also kick in approximately $106 million over the next 30 years to build up the area’s infrastructure. In exchange, the foundation will serve as the area’s landlord.

“What we’re trying to create with this district is a virtual front door for private industry to engage with Purdue” and the Purdue Research Foundation, said Adam Chavers, senior vice president of development for Browning. “As you go from ground-level retail all the way to advanced manufacturing that might need access to a runway, you can see we’ve covered a really, really wide stretch of uses.”

A handful of projects have already broken ground. The first is a 44,000-square-foot Rolls-Royce research and development facility in the Aerospace District out by the airport. A far more obvious addition sits on State Street. Called Aspire at Discovery Park, the $86 million development will offer 835 beds worth of student housing in three four-story buildings, to be completed in fall 2019.

A second element, a five-story building called The Convergence Center for Innovation and Collaboration, recently broke ground. Also on State Street, it’s billed as a place where corporations can set up offices for collaboration with Purdue faculty. So far, demand for space has been brisk.

“I’m getting most of my requests coming via referrals from other people,” said David Broecker, chief innovation and collaboration officer for the foundation. “I have people coming to me. I’ve not necessarily had to go out and knock on a lot of doors.”

The Convergence will be a 145,000-square-foot, five-story office building designed to bridge the gap between Purdue University research and its commercialization. (Rendering courtesy of Browning Investments)

Adam Chavers and Browning Investments are no strangers to sprawling, multi-decade projects. But none has included quite as many components as the Discovery Park District.

“It can be hard to get your head around what’s being planned here,” said Chavers, the firm’s senior vice president of development.

Still, size does have its advantages. Lots of so-called “innovation districts” cover only a few city blocks, limiting what can be accomplished. Even the relatively spacious 16 Tech biosciences park in Indianapolis spans only 60 acres. The Discovery Park District offers wide-open spaces—though much of that is innocent of even basic infrastructure, and needs everything from water lines to access roads.

“When you have 400 acres and a really wide mix of uses, it makes the planning component and the infrastructure and all of that groundwork you have to do pretty expensive and pretty complicated and time-consuming,” Chavers said.

For the next few years, development will center on the State Street corridor, focusing on office space and housing. Since filling the place is projected to take 20 years, making the Discovery Park District a success will require the work of not just the Dennis and Daniels administrations, but also those of their successors.

Hicks said the payoff won’t come tomorrow, or even a decade from now. Worst-case scenario, he said, the school and city will end up with a large campus annex that will repay its initial investment. But if everything breaks perfectly, it could create a tech and innovation center that will change the fate of the region.

“It won’t make a difference in Tippecanoe County this year,” he said. “But 30 years from now, it could mean that Tippecanoe County, connected to Boone County and Hamilton County, could be a big hub where people come to advance their ideas.”

At the very least, it’s going to change West Lafayette. Dennis pointed out that, a decade ago, his city’s entire assessed value was less than $1 billion. If all goes to plan, the Discovery Park District could be worth more than $1.2 billion all by itself.