Home » The Yard in Fishers: It won’t be just about the food 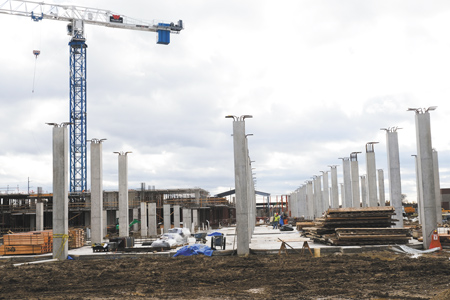 Creating more dining options for residents and visitors might have been the impetus behind a 17-acre culinary district under construction in Fishers, but the developer says the retail and residential aspects of the project are equally important to its success.

And a year before the first tenants are set to open, 80 percent of the project’s 120,000 square feet is leased.

When The Yard at Fishers District was proposed in November 2016, it was billed as a culinary-centric development that would fill a void by providing fine dining to Fishers residents who for years had been demanding more variety in their restaurant scene.

But as the project has grown, so has the number of non-food-related tenants. While all eyes have been on restaurant announcements, plenty of other retailers have committed to The Yard, said Jessica Landez, owner of Blue Peppermint Boutique, which will move to the development next year.

Many of those tenants offer services. Amazing Lash, Epic Training, Massage Heights and Verizon Wireless are signed on, along with a yet-to-be-announced upscale salon. The Havana Cigar Lounge is also on board.

The announcements come two years after Thompson Thrift Retail Group announced it would redevelop the property at 116th Street, east of Interstate 69, that had been the site of the 29-home Springdale Estates neighborhood. Originally projected to cost $40 million to $60 million, the development called for 10 to 12 lots for restaurants and entertainment venues, space for a four-story hotel, plus a one-acre green space in the center for the city’s 3,000-square-foot culinary incubator.

But early this year, Thompson Thrift expanded the project to include a mixed-use building with 260 luxury apartments and ground-floor retail space.

Now expected to cost $110 million, the project has space for 34 to 37 tenants. At least eight of them won’t be restaurants, and more service-related and shopping tenants could be announced as Thompson Thrift looks to fill its final 20 percent of space.

Ashlee Boyd, managing partner of Thompson Thrift Retail Group, said the developer is seeing strong interest in its remaining storefronts. Construction is underway, and the first tenants are expected to open next October, he said.

Intended to be a dining destination like Massachusetts Avenue or Fountain Square in Indianapolis, The Yard will deliver to residents a variety of unique restaurants, including two concepts by St. Elmo Steak House operator Craig Huse. But Boyd said in an email to IBJ that it’s important for Thompson Thrift to provide “a good balance of uses within a project of this size. … It creates a more sustainable and dynamic project for the customer and a more financially stable environment overall.”

Landez, owner of Blue Peppermint Boutique, said the foot traffic the restaurants, apartments and hotel are expected to create is what led her to decide to move her clothing shop, which opened four years ago in a house on South Street near downtown Fishers.

The shop doesn’t see much foot traffic today. Operating out of a home, many people don’t realize Blue Peppermint is there, Landez said. 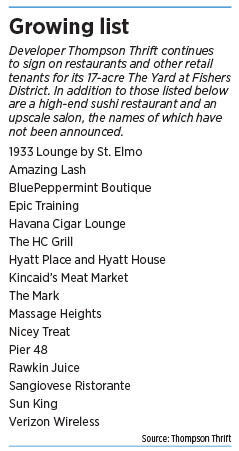 “What we anticipate is being able to reach the customers that we’ve already established, but also with Ikea and Top Golf and the hotels, we are really hoping to also build our online business with this location,” she said.

“We anticipate having a lot of out-of-town customers as well.”

When she signed on to lease space at The Yard, the other tenants were all food establishments, so she’s excited to see more retailers—like salons and massage therapists—move in, she said.

She welcomes more, even another boutique.

“To be honest, I wouldn’t be surprised if we end up seeing some additional retail, and honestly, I would prefer that,” she said. Even if not, “there’s going to be enough happening in that development. I don’t worry there won’t be people.”

Because The Mark apartments included in the project are higher-end, those residents will be able to support The Yard’s restaurants and upscale retail, and will likely look to run as many of their errands as they can there, said Josh Purvis, managing director for Watermark Residential, the multifamily division of Thompson Thrift.

“If you can get the resident that’s happy to park their car and leave it Friday afternoon and not get back into it until Monday morning because they have everything they need at home, that’s perfect,” he said. “You don’t have that unless you have that variety.”

Kincaid’s will open its second location in a roughly 3,000-square-foot anchor space in the mixed-use building. Its original store is at 5605 N. Illinois St. in Indianapolis.

The Fishers location of the butcher and meat market will employ 12 to 15 people and offer the same products as the Indianapolis location, Dugdale said, including fresh meat and fish, cheeses and eggs.

Purvis said what Thompson Thrift is building really doesn’t exist in Fishers, or many other places.

“We deliver amenities as part of our [multifamily] developments—your fitness centers and swimming pools,” he said, but The Yard “is a very unique development for sure.”•