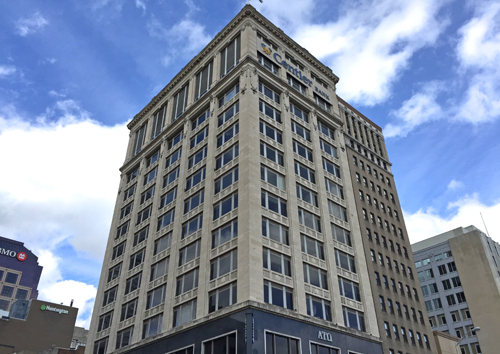 A local developer with plans to convert a historic downtown high-rise into a hotel has sued a bank occupying part of its ground floor, alleging the business violated its contract and has failed to pay rent.

Loftus Robinson LLC, operating as 1NP LLC, filed a complaint last week against Merrillville-based Centier Bank. It operates a street-level branch and leases other space in the 16-story, 110-year-old One North Penn building on the northeast corner of Washington and Pennsylvania streets.

Loftus Robinson owns the building and has a deal with San Francisco-based Kimpton Hotels & Restaurants, a division of IHG, to transform the 82,000-square-foot tower into a 130-room Kimpton-brand hotel. And that requires relocating Centier from the largely vacant building.

Filed Nov. 13, the suit claims Centier ignored repeated efforts to help it find a new space for its branch on the ground floor and that it failed to negotiate a new lease for an alternative space in good faith. The suit also alleges the bank has not been paying rent for its spaces, although the length of time is not disclosed.

Loftus also alleges Centier has explored other location options—despite entering into a letter of intent to move to a building directly east of One North Penn.

►DOCUMENTS: See the full case and information related to the suit

“(Centier) has … been more interested in negotiating a buyout and/or entering into an entirely different lease with a third party than diligently negotiating and executing a new lease with Landlord upon the previously-negotiated terms,” the suit claims.

Loftus claims the problems have led to delays in the planned redevelopment of the building as a hotel. The firm has requested damages for back-rent, ongoing operating expenses and attorneys’ fees.

A spokeswoman for Centier said the company does not comment on legal matters. Drew Loftus of Loftus Robinson did not immediately return a call requesting comment Monday.

Centier has anchored the ground floor of the building since 2015, alongside Pita Pit, which closed in September to make room for the new hotelier.

For the first two years of its lease—beginning in mid-2015—Centier paid a combined $8,410.52 per month in base rent for its spaces on the first and 13th floors of the building, according to the suit. In mid-2017, the combined base amount for the spaces increased to $10,913.50. Centier also was responsible for paying additional fees.

In the months after the building was purchased by Loftus and the developer assumed the lease, Centier initially agreed to move next door, to 110 E. Washington St., according to the lawsuit. The building is an office tower-turned-condominium complex that retained commercial space on its first few floors. Under a letter of intent signed in November 2017, the bank was expected to lease the first two floors of the tower, at 4,370 square feet each.

No records for the first or second floors of the building could be located through the Marion County Assessor's office.

The bank moved its 13th floor offices to a temporary space on the second floor of the One North Penn building sometime in 2018. As part of an agreement with Loftus Robinson, it wasn’t required to pay rent for the space so long as it worked in good faith toward a new lease for the new address.

According to Loftus' suit, Centier “demanded, among other things, an additional 2,000 square feet of rental space in 110 E. Washington St.  and required the annual rent be decreased by more than 15 percent of the originally agreed upon pricing." The bank has also refused to agree to any of the terms outlined in the amended leasing contract.

Loftus hopes to move forward on the Kimpton project and capitalize on a trend across downtown of converting office space into hotels and apartments.

The Kimpton project is expected to include a rooftop bar and more than 5,000 square feet of meeting space.

Some historic buildings nearby, including the IBJ Media building 41 E. Washington St. and the Stock Yards Bank & Trust Building at 136 E. Market St., are expected to be converted into hotels in coming years.

Loftus bought the building in March 2017 for $7 million, taking ownership from Hollywood, Florida-based Naya USA Investment & Management LLC, which owned the building for just over a year.

Work on the hotel was initially supposed to start in mid-2018. It's unclear how much work might already have been done inside the building. A recently erected construction fence enveloped the south-facing portion of the building's ground floor on Monday morning.

The One North Penn property, long known as the Odd Fellows Building, was designed by local architecture firm Rubush & Hunter and opened in 1908. It was one of Indianapolis’ first high-rise buildings.