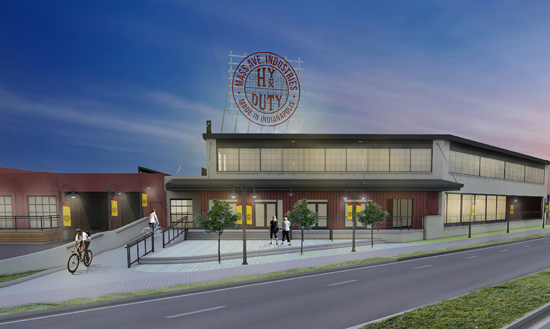 The redevelopment of the giant Circle City Industrial Complex at East 10th Street and Brookside Parkway got a huge boost last week in the form of a $4.1 million loan that will allow a makeover of part of the building, potentially leading to additional tenants.

The loan from Local Initiatives Support Corp., the largest ever for the local office of the national not-for-profit, will be used by building owner Teagen Development to essentially complete the redevelopment of the 541,000-square-foot industrial building it bought in 2015.

Teagen will use most of the funds to rehab the 120,000-square-foot southern portion of the building, including a roof replacement and the addition of utilities.

The south portion is the most visible part of the complex and the area Teagen had hoped to work on first, but filling the north end with tenants provided financial stability while the developer sought funds for the south-end rehab.

"The building had substantial financial and infrastructure issues when we purchased it in 2015," Larry Jones, president of Teagen Development, said. "We focused on stabilizing the northern portion of the project first, which was already habitable. This loan enables us to bring tenants now to the southern portion of the building, which has been vacant for nearly a decade."

The developer’s return to the building’s southern portion will mean a new façade—designed by local architecture firm Blackline Studio—for the nearly century-old building, improvements to its infrastructure, and build-out of additional tenant spaces. Jones couldn't say when work will begin.

The north end of the former industrial building houses about 130 tenants, most of them artists or small operations that occupy only a few hundred square feet of space. That area is also home to Centerpoint Brewing, Ruckus maker space, 8th Day Distillery and Lick Ice Cream, as well as the Indianapolis Winter Farmer’s Market.

The interior renovations will give the building an appearance similar to that of an indoor mall—public restrooms, individual entrances for each business—Jones said, while noting one key difference: CCIC is oriented toward local, family-owned businesses rather than national retailers.

By the time the development is fully occupied, Jones said he expects about 160 tenants. Among them are expected to be a coffee shop, The Convivial Community Bar—originally announced in 2016—and a motorbike shop. Jones said he's also seeking tenants for about 40,000 square feet of office, retail and flex space.

Jones said the idea behind the building is to make it more inviting for the broader community.

The volume of tenants, coupled with the short-term leases for most of the artists, is what led to LISC’s involvement in the project, Jones said.

LISC, which has offices in 32 cities across the U.S., connects communities that struggle economically with the resources they need to boost employment and investment. Jones said most lenders are “reluctant to take on projects with lots of tenants and not a lot of long-term leases, like ours.”

Tedd Grain, president of LISC’s Indianapolis office, said the group was eager to work with Jones and Teagen to continue the development of the complex.

“This really allows the developer to expand on uses of the building,” he said. “I think this shows we are able to do loans when other, more conventional lenders may not be willing or able to. It’s really all about us being able to give back to the community.”

Rachel Ferguson, vice president for Teagen, said the continued revitalization of the building has had a big impact on the neighborhood. Other changes in the area include the addition of houses worth $300,000-$600,000 and several multi-family projects.

Grain said he is hopeful the new investment in CCIC will translate into an abundance of new jobs for the corridor. He said projects like the CCIC can help reintroduce innovative, creative concepts to the neighborhood, while also making use of buildings that may otherwise sit empty.

“These were once places of innovation,” he said. “We’re trying to create that again.”

CCIC bridges the gap between the emerging Windsor Park neighborhood to its east and wealthier areas to the south and west. It's just north of the Cottage Home neighborhood, where pricey homes have sprung up in the last five years. Immediately southwest of the complex is Bottleworks, a $260 million, 12-acre redevelopment of a former Coca-Cola bottling plant just started by Hendricks Commercial Properties.

This story has been updated to fix inaccuracies and better explain the project.