About a dozen Indiana lawmakers and several community and business leaders affiliated with a coalition that is advocating for a state hate crimes law to be passed this year made it clear Tuesday afternoon that they think protected classes need to be spelled out in the bills considered by the legislature.

The advocates expressed their opinions at a campaign kickoff event at the Indiana Statehouse just days after Rep. Greg Steuerwald, R-Avon, filed a bias crimes bill that would not specify any protected classes, such as race or gender. Steuerwald has said he thinks that’s the only way to ensure everyone is covered in the legislation. 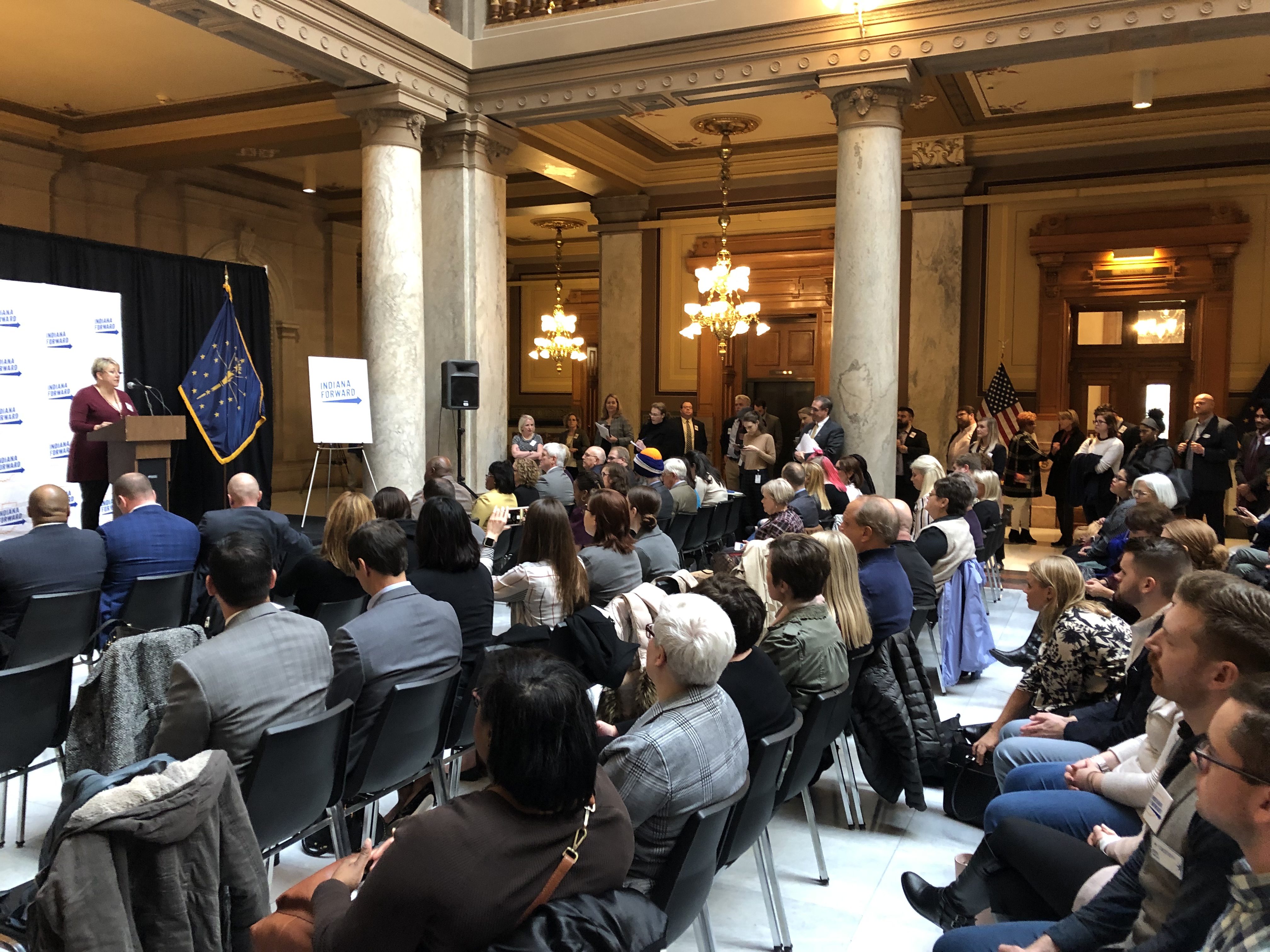 The group pushing for hate crimes legislation, Indiana Forward, includes representatives from the United Way of Central Indiana and the Indy Chamber, plus a variety of businesses, not-for-profits, faith groups, and colleges and universities.

Ann Murtlow, president and CEO of United Way of Central Indiana, said at the event Tuesday that the law “must be explicit and include a comprehensive list of protected classes.”

Otherwise, Murtlow said, the law would not be effective and could run into issues when it comes to enforcing it.

“These very basic principles must be met to garner the full support of our coalition members and to remove Indiana from the list of five states without a recognized bias crimes law,” Murtlow said.

Lawmakers from both chambers and political parties, including two authors of already-filed hate crimes bills, spoke at the event to stress their support for the issue.

In addition to Steuerwald’s bill, Rep. Tony Cook, R-Cicero, and Rep. Greg Porter, D-Indianapolis, have filed separate bills in the House, while Republican Sens. Ron Alting of Lafayette and Mike Bohacek of Michiana Shores have filed a bill in the Senate. All three of those bills include a list of protected classes and include gender identity as one of the classes.

Cook suggested a bill without a list of protected classes would be “watered-down.”

“It’s not time to compromise the most frequently targeted victims, as we have data from the FBI,” Cook said.

“It is time instead to create and pass a strong bill.”

Porter said the state needs a clear bill that outlines in black and white who is protected, and he won’t be supporting Steuerwald’s bill.

“That leaves it too vague,” Porter said. 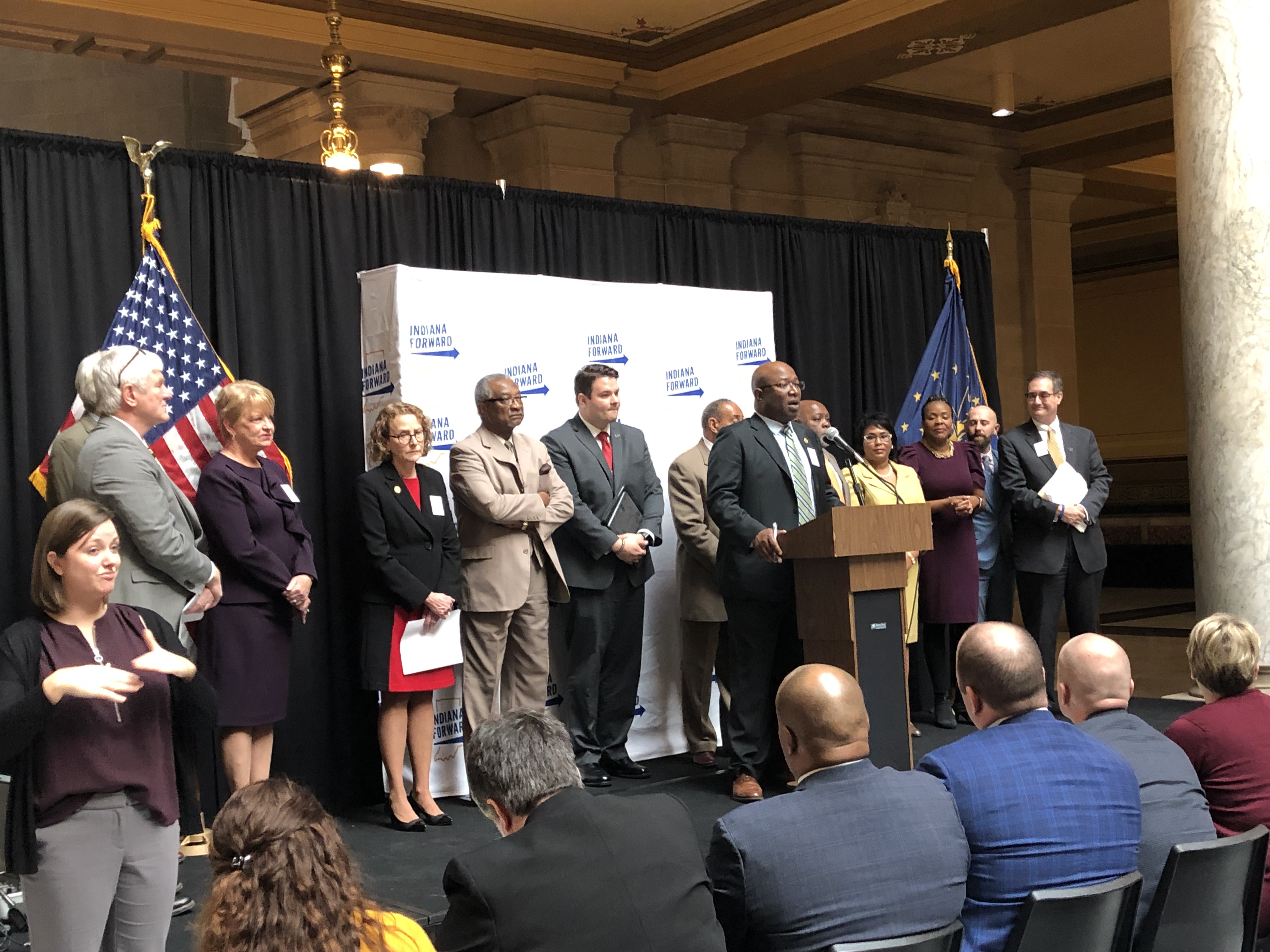 Sen. Greg Taylor, D-Indianapolis, said a bill without a list of protected classes could be found to be unconstitutional, like Georgia’s previous hate crimes law, which was struck down in court for being too vague.

But Taylor is not too optimistic that what he considers to be a comprehensive bill will pass.

“I have confidence that we’re going to have the discussion, but until the people in leadership come forward and say, ‘I want a bill,’ I have apprehensions about what’s going to happen,” Taylor said.

The issue is on Gov. Eric Holcomb’s agenda, and he has said he would like it mirror the state’s personnel policy that does list protected classes, but the issue did not make the top priorities for Indiana House or Senate Republicans.

In 2017, 65 percent of Hoosiers said they were in favor of hate crimes legislation, according to Ball State University’s Hoosier Survey.