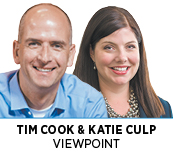 A collective sigh of relief could be heard from the losing cities that competed for Amazon’s HQ2 as they watched the frame-by-frame wreckage of the company’s flameout in New York. On an economic development disaster scale of 1 to 10, Jeff Bezos’ decision to pull out of the Empire State hovers close to an 11.

And while we’re scoring moves that resulted from the New York debacle, Indy, unlike some other cities, nailed a perfect landing in its decision not to rush to the Amazon trough in an attempt to re-compete for an HQ2 site.

One member of Indy’s site selection team provided a pitch-perfect response when asked if the city should pursue an Amazon headquarters site once again. She indicated that, if asked, “We’d continue the dialogue.” A graceful answer that also astutely indicates a decidedly been-there-done-that vibe.

How the New York collapse transpired was unique to that location and those facts, but it provides a meaningful lesson for the Hoosier state. New York features a singular political and cultural landscape. Local politics can take on statewide, national and international importance in a proverbial New York minute. In this instance, presidential candidates, unions, a flavor-of-the-month federal representative, and an ambivalent second-term mayor all castigated Amazon in stark contrast to a governor who blamed all those players and more for losing HQ2.

At its core, an economic development project with 25,000 high-paying jobs and tens of millions of dollars in investment is worth wanting. The other winning entry in the HQ2 sweepstakes, North Virginia, has yet to show any buyer’s remorse as it has worked seamlessly with Amazon to get its second headquarters up and running.

What can be learned from the New York experience? The importance of cooperation and teamwork.

The political partisanship, finger-pointing and overall lack of cooperation among government units created a hostile environment that posed too much risk for Amazon to embark upon a massive New York City expansion. Simply put, companies want to avoid risk. When state, local and federal officials can’t play nice, other suitor communities where a collaborative and cooperative spirit reigns will pounce.

This is an especially important lesson right now, as Indiana’s Legislature is in session. One example of collaborative, intra-region cooperation being considered is the Accelerate Indiana Municipalities investment hub initiative being promoted by Fishers Mayor Scott Fadness. This construct would allow multiple municipalities to cooperatively generate revenue for important quality-of-place investments on a regional basis. These hubs would serve a dual purpose of enabling important investment while demonstrating regional cooperation.

While the Legislature appears to be less than receptive to empowering local governments to partner with one another to determine their own futures, we hope the Amazon experience can serve as a useful lesson. AIM investment hubs are the ideal vehicle to illustrate a cooperative spirit and low-risk business environment.

Of course, based on the Senate’s last-minute watering-down of hate-crimes legislation—in spite of guidance from our sensible governor and vocal business community—hopes for AIM investment hubs should be muted.

If dividing constituencies instead of coalescing around ideas that can unite them becomes a new Hoosier norm, perhaps we’ll find we have more in common with New Yorkers than we originally thought.•

Cook is CEO and Culp is president of KSM Location Advisors.