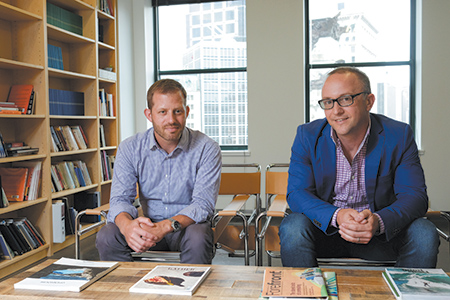 More than 20 years after founding his tech consulting and development firm Studio Science, Kristian Andersen has sold the company to a group of investors led by CEO Steve Pruden.

Studio Science made the announcement Wednesday morning. Terms of the sale were not disclosed.

The company said it will continue to grow in Indianapolis and has taken an additional floor in the historic Lacy Building on Monument Circle, where it has more than 35 employees. The new space will help accommodate the agency’s new Studio Science Labs initiatives, which are geared toward the development of software startups.

Andersen, who founded the company in 1998 as Kristian Andersen Design, will continue to help guide the business as a member of a newly established advisory council. Joining Andersen on the council:

Pruden joined Studio Science as CEO in May after holding several leadership positions at Appirio where he oversaw consulting delivery, corporate strategy and human resources. He was brought in to help steer the company into new territory and accelerate growth. The company has been taking on larger clients—such as Simon Property Group, Roche Diagnostics, Herff-Jones and Stericycle—that are not strictly technology companies.

Andersen told IBJ on Wednesday morning that the sale will allow him to "focus all of my energy" on his work at a partner at venture studio High Alpha, also based on Monument Circle.