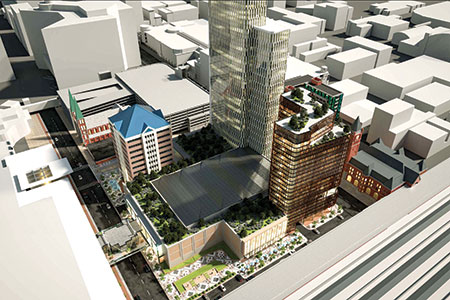 A coalition opposed to the development of two downtown convention hotels plans to launch a “significant” multimedia advertising campaign Thursday with hopes of swaying the public—and lawmakers—on the issue.

The group comprised of downtown hotel owners will run ads on local television and radio stations and in area newspapers—including IBJ—over the next several weeks, and also might use billboards and other mediums.

The ads are directly aimed at the 800-room and 600-room Hilton-branded hotels planned by Kite Realty Group Trust at Pan Am Plaza alongside the $120 million proposed expansion of the Indiana Convention Center at Pan Am Plaza.

Bruce White, chairman of White Lodging Services Corp., which owns the JW Marriott Indianapolis, said he hopes the campaign “sends a message” to city and state leaders, as well as the public “about what’s at stake.”

The “Room for Truth” campaign is expected to be rolled out in phases through the rest of the legislative session, which concludes April 29, White told IBJ.

“We're going to start out with the first phase and then, depending on whether we can get communication going with the mayor's office, we'll see where it goes,” White said.

He indicated the campaign might be scaled back if the mayor's office seems receptive to making changes—or at least having a conversation.

The campaign is expected to directly go after Senate Bill 7, which includes funding mechanisms for the Capital Improvement Board, owner of the Indiana Convention Center and all of the city’s professional sports venues.

The hotelier group is specifically opposed to language in the bill that is related to the addition of the two new Hilton-branded hotels at Pan Am Plaza. The hotels would bring more than 1,400 new rooms to the downtown market—800 rooms and 600 rooms, respectively—with bill language allowing taxes generated by the hotels to be used to pay for other CIB projects, including a potential 25-year deal with the Pacers that could result in extensive improvements to Bankers Life Fieldhouse.

White said almost every downtown hotelier has provided “resources and cash contributions” for the ad campaign. He declined to say how much was being spent, but said “it’s a significant amount.”

Mike Murphy, a former state lawmaker handling the campaign’s communication operations, declined to share details about when and where the advertising would run. He said sharing that information would be “giving away our strategy.”

A print advertisement obtained by IBJ features the headline “Subsidize hotels or fix streets?” It criticizes the CIB for the plan to spend $120 million in public funds to subsidize the Pan Am Plaza project.

“[…] an unelected, unaccountable government board wants to divert your tax money from filling potholes and catching bad guys,” the ad states. “They want to give $120 million of your money away to subsidize new luxury hotels that you’ll never stay in. Hard-working Hoosiers can take a stand against 'freebies for freeloaders.'"

The ad implores the public to write to the Indiana House of Representatives through the campaign's eponymous website, through a pre-filled message asking lawmakers to either amend the bill or not support it in its current form.

The Capital Improvement Board is comprised of local leaders appointed by a variety of entities, including the mayor’s office, City-County Council, Marion County Commissioners and leaders in the surrounding counties. The money it spends is generated by cigarette taxes, license plate fees, food and beverage taxes, auto rental taxes, innkeepers taxes and taxes generated within designated Professional Sports Development Areas, which generally include the athletic stadiums and downtown hotels.

The CIB has agreed to pay Kite about $120 million to help fund expansion project, but that money is earmarked for Kite’s work on the proposed 80,000-square-foot expansion of the Indiana Convention Center.

The hotel portion of the project is being privately funded by the developer, though tax breaks and other incentives for that project are believed to be under negotiation between the city and Kite.

If the Kite project were to receive subsidies, it wouldn’t be unusual. Multiple downtown Indianapolis hotel projects—including White’s 1,005-room JW Marriott project that concluded in 2011—have received subsidies over the years. About $59 million was given by the city for the JW project, while a separate Marriott project received $23 million in the early 2000s. The JW is the largest hotel in Indianapolis.

The ad campaign is the latest in a series of overtures made by a group of hoteliers in recent weeks to convince decision makers that the proposed 1,400 new hotel rooms would damage downtown’s hospitality industry.

The group, which includes White and General Hotels Corp. CEO Jim Dora Jr. (a CIB board member) contends the city would fail to absorb the hotel rooms. The hoteliers contend the addition of such a large number of rooms—on top of more than 1,300 expected to become active within the next three years—would harm the local hotel industry.

Without the two new hotels, it’s unlikely the CIB will be able to generate the revenue necessary for its other proposed projects, including upgrades to the Fieldhouse it plans to make as part of a long-term deal with the Pacers.

White, one of the richest men in the state, said he would like to see what he considers a more thought-out approach to adding rooms downtown, and said hoteliers were left out of that conversation.

“We feel we should have had an opportunity to express our concerns,” he said. “Instead of looking at this as a one-shot deal, [make] this part of a longer-term plan that thoughtfully, strategically, plans for the continued growth and expansion of the convention business in Indianapolis.”

"Over the last several years, the CIB has engaged stakeholders, civic leaders, and community partners in a comprehensive process to study the long-term needs of our convention and event facilities, as well as a holistic vision for our organization's future," she said. "Throughout that planning process, there were multiple opportunities for local and national stakeholders to learn more about our current needs and provide their input. It is unfortunate a small group of individuals has chosen this tactic but we remain committed to discussing the concerns of our local hoteliers and hope they will remain productively engaged in the process of developing Pan Am Plaza and a convention center expansion going forward."