State lawmakers are poised to increase school funding by 2.5% each year in a $34 billion final budget plan—just slightly more than the amount proposed last week by the Indiana Senate.

Republican leaders on Tuesday afternoon released the final version of the two-year budget, which includes $539 million in additional base funding for K-12 education, and described it as a historic amount of funding for education. That's an increase of $4 million from the Senate's latest plan. 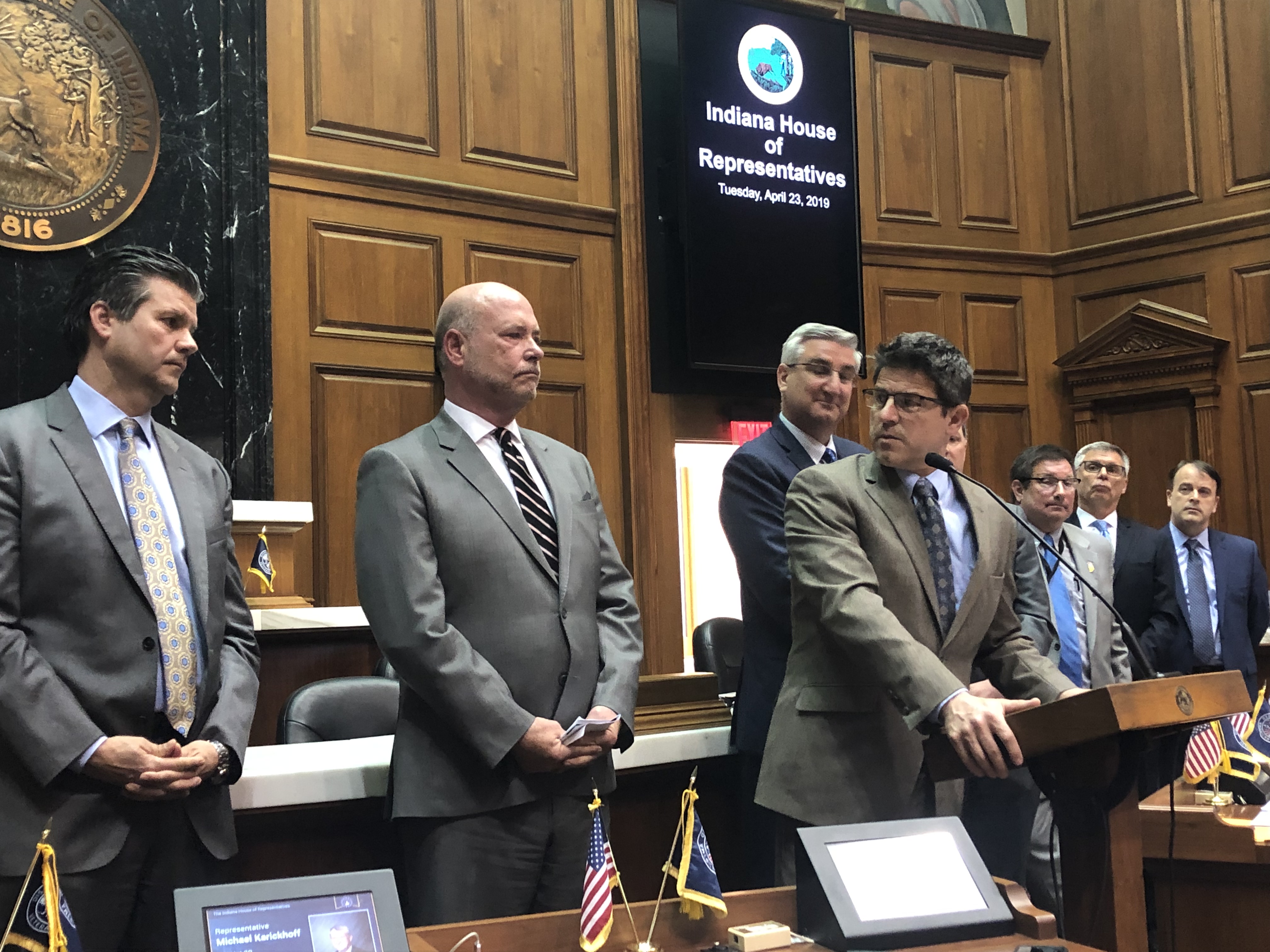 The budget also includes $74 million in additional dollars for K-12 programs, such as the Teacher Appreciation Grant program and the Secured School Safety Grant program, and aims to free up school district money by paying off $150 million in future teacher pension obligations.

The one-time payment, which the state is taking from its reserves, is expected to save schools $70 million per year.

The budget is expected to have an 11.6% surplus each year, which would keep reserves above $2 billion.

House Speaker Brian Bosma, Senate President Pro Tem Rodric Bray, Gov. Eric Holcomb and top budget writers from both chambers introduced the revised budget during a press conference where they were joined by education officials from multiple organizations, including the Indiana School Boards Association and the Indiana Association of School Business Officials.

The budget still has to be voted on in both chambers. The legislative session is expected to end Wednesday.

“We appreciate what has happened with this budget,” said Dennis Costerison, executive director of the Indiana Association of School Business Officials.

Democrats are still criticizing the budget for not directly increasing teacher pay though.

“All that we just heard from Gov. Holcomb and Speaker Bosma is that teachers will not be getting a pay raise this session,” House Minority Leader Phil GiaQuinta said in a written statement. “Republicans continue to prioritize unaccountable charter and voucher schools at the expense of traditional public schools. Despite Republican leadership claiming this is a historic increase in K-12 funding, it's clear that our traditional public schools will not receive the resources they need."

The Indiana Department of Child Services will receive an increase of $256 million to its budget in 2020 and $246 million in 2021. The agency had requested $286 million per year in additional funding, and state lawmakers initially seemed willing to allocate that amount. Now, leaders say DCS has seen improvements over the past few months and doesn’t need the full amount.

The updated budget almost entirely restored funding for the 21 Fund, the state’s primary tool for promoting startups, entrepreneurship and research and development. The Senate version of the bill allocated $22 million in 2020 and again in 2021, but that was $8 million per year less than the spending plan proposed by Holcomb and the version approved by the House.

The change between the House and Senate drafts prompted the new Indiana Technology & Innovation Association to send an alert to its members, urging them to call lawmakers to ask for full funding for the program.

The budget now allocates $29.75 million per year for the fund.

“We worked with the administration to get them back to where they thought they needed to be,” said House Ways and Means co-chairman Todd Huston, R-Fishers. “They feel very passionately about that program.”

The budget also slightly shifts how the $1 billion in additional revenue the state is set to receive from the Indiana Toll Road rate increase the Holcomb administration negotiated last year.

Up to $185 million of the funding could be diverted from helping fund the acceleration of the Interstate 69 completion or the reduction of the number of stoplights along U.S. 31 to instead help fund the South Shore Line’s extension project in northwest Indiana.

Bosma said the federal match funding for the South Shore Line project is expected to decrease, which is why the state had to decide to either provide the extra dollars or let the project die.

House Republican leaders said the state can still accomplish the I-69 and U.S. 31 projects by using money elsewhere in the budget.

The administration has “assured us they have sufficient funds to backfill those projects and move forward as planned,” Bosma said.

The budget bill—House Bill 1001—also now includes language that had been in a different piece of legislation that is designed to close a loophole in online sales and hotel tax collection.

That language is part of the funding formula the Capital Improvement Board is counting on, because the CIB receives some of its revenue from innkeeper’s taxes. The CIB estimates closing this loophole could generate an additional $1.6 million to $2.3 million annually for the quasi-government agency over the next 25 years.

The budget plan does not include funding for Amtrak's Hoosier State line from Indianapolis to Chicago. The line is expected to cease operations without new funds.