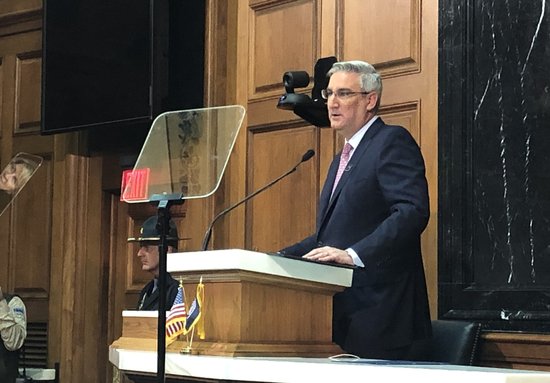 Gov. Eric Holcomb announced a plan in his State of the State address Tuesday night that he hopes will push even more funding toward teacher paychecks.

But there is no guarantee those dollars be spent on teacher pay, and some education advocates have argued it’s not enough.

Holcomb said the state will also use $150 million in surplus funds to pay off a teacher pension liability that schools have been gradually paying down. The one-time state payment is expected to save local schools $140 million over the next two years.

“Just like paying off your mortgage frees up money in your personal budget, this state investment will save all local schools $140 million over the biennium with continued savings thereafter,” Holcomb said.

There is no requirement that schools use that savings to pay teachers more. But Holcomb said he wants schools to “allocate 100 percent of the $140 million to increasing teacher paychecks.”

Democratic and Republican legislative leaders voiced support for the idea of paying off the pension liability.

“I’ll give him credit for some creativity there,” Senate Minority Leader Tim Lanane said.

House Speaker Brian Bosma said he thinks it’s “a wise use of surplus.”

“Anytime you can make a one-time investment that has a long-term multiplier pay out in it, I think that’s a good thing for the state,” Bosma said.

But both party leaders said that even with the pension money freed up, the governor is still not providing enough new money for education.

“We have a strong team that’s working on it right now,” Bosma said. “They will find every dime that they can to put toward education.”

Holcomb said funding the pension liability is part of a short-term strategy to address the teacher pay issue. And as part of a long-term plan, Holcomb announced creation of e Next Level Teacher Pay Commission, which will be chaired by Michael Smith, a former Anthem Inc. executive and co-founder of Indianapolis-based Cardinal Equity Fund. The commission's goal will be to determine a competitive wage for teachers in Indiana and find ways to get educators to that salary level.

Holcomb also used his annual speech to address another big budget item: the troubled Indiana Department of Child Services, which could see an additional $286 million per year in funding under the governor's budget proposal.

“It’s still early, but the investments we’ve made to increase caseworker salaries and improve the workforce culture are making a difference,” Holcomb said.

One item not in the budget—but top-of-mind for some state lawmakers—is the $1 billion the state will receive from an increase in fees paid for heavy trucks along the Indiana Toll Road. The governor’s office has maintained the money did not need to be appropriated by the Legislature, but some lawmakers have indicated they want control over it.

Holcomb talked about several of the projects that will be funded with the money—accelerating the Interstate 69 completion, pursuing new international flights and expanding broadband to rural parts of the state. He said he heard that kids in one town have to go to McDonald’s to get internet access for school work.

“Nothing against large coffees and Big Macs,” Holcomb said. “I’m a fan of both. But all students should be doing their homework at home.”

The rest of Holcomb's speech mostly focused on already-announced initiatives and other legislative priorities, such as exempting military pensions from state income taxes, continuing to expand workforce development programs and fighting the ongoing opioid epidemic.

“We will keep working 24-7-365 to get more of our Hoosier neighbors on the road to recovery,” Holcomb said.

Toward the end of his speech, Holcomb reiterated his position that the state needs a hate crimes bill and stressed that the wording should mirror the language in the state’s employee handbook, which includes a list of protected classes, including gender identity, sexual orientation and race. One of the bills filed this year does not specify classes of individuals that would be protected in an attempt to cover everyone.

“Businesses interested in Indiana care about this issue, but it’s not just about business,” Holcomb said. “At heart, this has to do with people’s dignity and how we treat one another.”

Lanane complimented Holcomb for talking about bias crimes legislation and referencing the idea to include a list of protected classes. But he questioned whether Republican lawmakers will support that language over the bill that doesn't include a list.

“Why is it that we can’t just say, ‘Let’s protect these people’?” Lanane said. “Why are you scared to say we’re going to include sexual orientation and gender identity? It makes us look bad, like we’re embarrassed or ashamed to use those words.”

House Minority Leader Phil GiaQuinta said since the GOP has supermajorities in both the House and the Senate, meaning they can conduct business without any Democrats, the Legislature should be able to act on Holcomb’s priorities on issues like hate crimes and teacher pay.