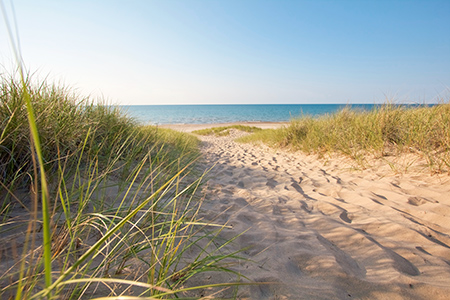 The country’s newest national park is right here in Indiana.

Already, the change is driving an increase in interest at the Dunes and in the rest of Porter County, officials say.

For more than 100 years, advocates have been trying to get national park status for the Indiana Dunes lakeshore, which is considered the most biodiverse area in North America. It’s also known as the birthplace of the science of ecology in America, because some of the country’s first ecologists began their research there in the late 19th century. 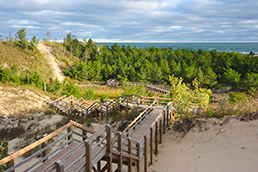 While the name change provides neither more protection nor funding for the lakeshore, it does raise the profile of the Dunes, which hosted 3.6 million visitors in 2018.

Tourism officials hope that number will only grow now that the Dunes has joined an elite list of 61 national parks.

Already, area tourism offices are receiving phone calls from people across the country who want to plan a visit. The day after the name change, a photographer shooting images for a book about the country’s national parks called to say he stopped production to ensure the Dunes would be included. And CNN stopped by this month to tape a tourism special about the area.

“We don’t have any numbers at this point, but it does appear the profile of Indiana Dunes has certainly gone up nationally as well as locally,” Bruce Rowe, public information officer for Indiana Dunes, told IBJ.

MORE FROM IBJ
What to do when you visit Indiana Dunes

The dunes are massive mounds of sand that reach heights of up to nearly 200 feet and were formed when glaciers passed over the area more than 10,000 years ago, leaving behind 15 miles of white sand beaches. 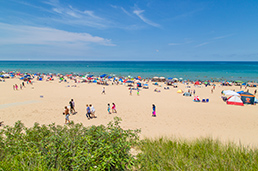 Indiana Dunes offers 15 miles of beaches, including West Beach, which was ranked in 2011 as one of the 10 Best Family Beaches in the nation by Parents Magazine. (Photo courtesy of Indiana Dunes Tourism)

Across the country, 418 National Park Service sites include parks, lakeshores, seashores, battlefields and monuments that are all managed under the same policies.

In Indiana, NPS sites include the Lincoln Boyhood National Memorial and George Rogers Clark National Historic Park, both in the southern part of the state.

But only 61 sites carry the national park designation.

Rowe said local and state tourism boards want to promote the area as a national park because visitors tends to be more familiar with the designation than with other kinds of NPS sites.

Some guidebooks and documentaries, for example, list only sites that carry the national park designation and don’t mention the country’s national lakeshores and seashores.

But whether the name change will reliably bring more visitors is hard to say, Rowe said, because tourism numbers vary depending on weather and beach conditions, he said.

But the region remains hopeful.

Dustin Ritchea, promotions director for Indiana Dunes Tourism—the official marketing, planning and development organization for the Indiana Dunes area—said even before the name change, the Dunes saw as many visitors annually as Mount Rushmore.

And in terms of marketing, the name change is already paying off, Ritchea said.

And a news release announcing the name change reached 72 million people, an advertising equivalency value of more than $670,000, according to Ritchea.

The Indiana Dunes is already seeing visitors who want to mark the new national park off their bucket list, and the busy season doesn’t begin until Memorial Day, he said.

“Even in our off season, we’re already seeing them trickle in,” Ritchea said. “We believe this will have a significant impact on the number of visitors coming to our area.”•